CBJ – McDonald’s has had another rough quarter, which has prompted CEO Steve Easterbrook to issue a public promise that a turnaround is in the offing.

“We are developing a turnaround plan to improve our performance and deliver enduring profitable growth,” Easterbrook said in a statement. “We look forward to sharing the initial details of this plan on May 4.”

The world’s largest restaurant chain has been mired in a prolonged sales slump in the U.S. and now the ripple effects are beginning to show in other countries as well. Much of the decline is due to stiff competition and also a noticeable shift by many consumers towards healthier eating habits.

Aside from those core problems, Easterbrook is also looking to enhance the image of the brand.  Oftentimes people will sarcastically speak of “McJobs” – in reference to low wages in the fast-food industry as a whole. To help combat that stigma, McDonald’s had already announced it would be providing an increase in pay for employees at company-owned restaurants. Individual franchisee owners are not bound by the pay hike, although some have indicated they will follow suit.  Curbing the use of antibiotics in its chicken is also seen as a must.

To date, McDonald’s shares have climbed 1.2% this year. Excluding some items, profit was $1.01 a share last quarter. 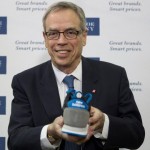