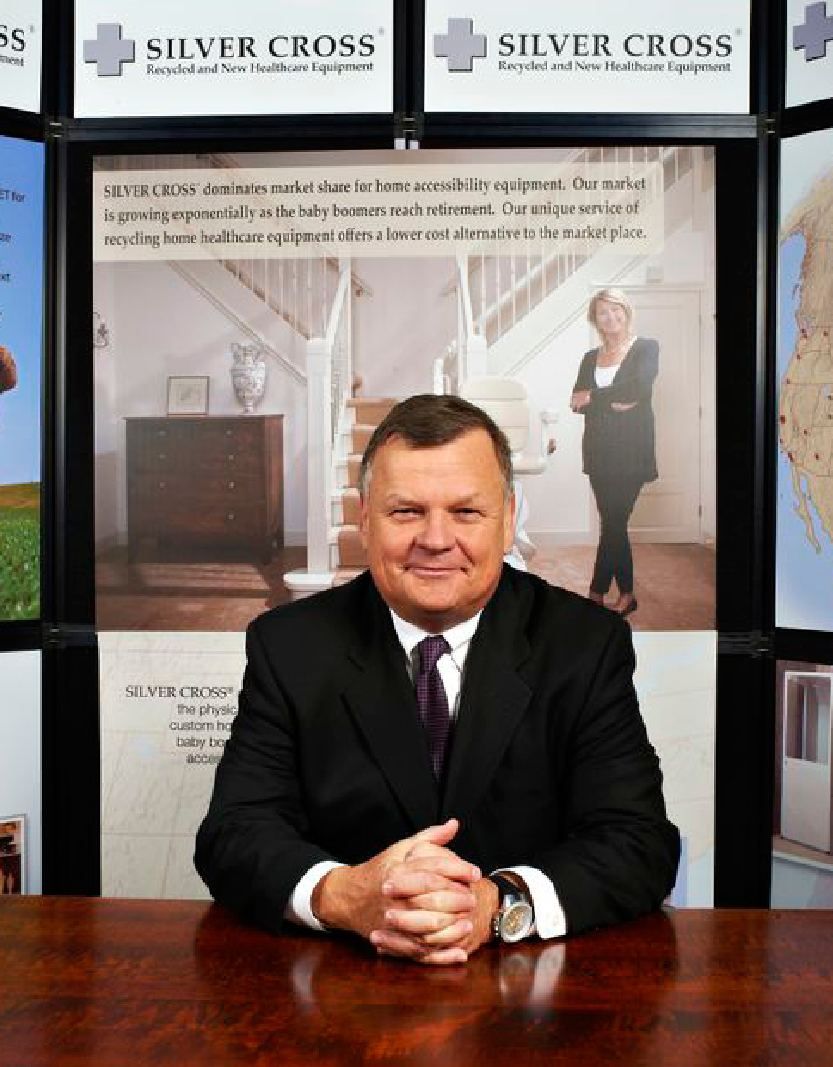 As the average age of the general population continues to get advance, the need for hi-tech medical assistance devices will only become that much more prevalent.

SILVER CROSS, a franchise system based out of Burlington, Ont., was created to help people with disabilities or other physical limitation challenged, often due to age or illness, remain in their homes, living independently. As the population of people age 65 and older continues to increase, demand for healthcare-related products and services grow as well. Many people prefer to remain independent and are resistant to move into assisted living facilities. For those individuals, SILVER CROSS could well be their salvation.

Founder and CEO Bob Harvey has grown SILVER CROSS into 19 locations across North America, including 15 here in Canada and four in the United States since its inception 1993. Harvey has announced plans to open 36 additional territories across the country, bringing the total to 51, and a goal to serve more than half of the North American population by 2020.

In his late 30s, Harvey sold his previous business and by his early 40s was looking for something to get involved with. As it happens, his father-in-law was in this equipment business in the Toronto area, which gave Harvey an idea of the potential marketplace based on that footprint. He determined to follow a formula similar to that of Play It Again Sports, only doing so with medical assistance equipment.

“I didn’t really recreate the wheel; I basically copied the recycling concepts throughout the marketplace and I saw the need for lower cost solutions then and of course now even more so,” Harvey says.

Harvey quickly learned that the best method for success would be to focus on a certain number of the most in-demand products, rather than trying to cover the complete gamut.

“It just didn’t make sense to recycle the smaller items,” Harvey notes. “We needed to gravitate to the larger ticket items such as the scooters and stair lifts, vertical lifts and wheelchairs.

During the first couple of years SILVER CROSS evolved quickly to recycling those larger items, which is where people really notice the savings. After that the company headed into the home accessibility area and gained a dominant position in that sector.

“The average stair lift lasts about 15 years, but is only about three years in a person’s home due to various circumstances,” Harvey reveals. “They might move or their condition regresses and can’t use the stair lift or they pass away – there’s a variety of issues.”

Harvey believed the stair lift was one of the main products SILVER CROSS would be able to recycle quite well within the industry and soon became known as the place to go in the Greater Toronto Area for any type of lift for home to recycle. It remains his main product.

“That’s where people would save $1,000 or more in relation to looking at a mint-condition used lift,” he continues. “There are different types of lifts beyond stair lifts: there are vertical lifts that will lift people for their wheelchair to the level of their home, it’s called a porch lift and seating lifts that can lift people into and out of their beds and wheelchairs.”

“A lot of times if a family member would need a seating lift, it’s possible that one of our locations would have the used track and we would supply maybe a used lift from another location because we all central database our used equipment. We also guarantee buying back the equipment to our existing customers.”

By lowering the cost of traditionally very expensive accessibility and mobility equipment, SILVER CROSS stuck upon a novel solution that drastically reduces the costs of stair lifts, wheelchair lifts, ramps and other costly in-home through recycling used items—literally buying, selling and trading the right products to families

after in-depth consultations in their homes. Plus, as a customer’s condition evolves, SILVER CROSS will buy back or trade equipment, as long as the product is in good working condition and a current model, offer even further savings on traditionally expensive equipment.

Because SILVER CROSS has a number of franchised locations, each with its own inventory, Harvey says his company will most often have the best chance of being able to provide a family with the proper equipment, more so than the competition.

Franchising is something Harvey knows very well. He previously owned a company called King Fence from its inception and at that time copied the model similar to that of College Pro Painters for the fencing industry in Ontario and had built it to 25 per cent market share in residential fencing duplicating the student concept in operating businesses in each geographical territory.

“We built it to 42 student franchisees plus our industrial division which was full-time people,” Harvey says. “I sold it and the new owner changed it back to a non-franchise model but we built it to a real going concern in the franchise world of student franchises. We learned the method of recruiting and training, agreements, distribution of products and got my feet wet with that whole process.”

Looking for his next business venture, Harvey wound up in the healthcare and medical sector.

It took him two to three years to put the full system in place.

“I ran the first location for seven years out of Oakville,” he notes. “We were running the location and learning the business and looked at franchising within a two or three-year period with our first franchisee being London, Ont.” That franchisee is still part of the SILVER CROSS system.

Soon thereafter, Harvey opened the second franchise location in Simcoe, Ont., southwest of Hamilton along the north shore of Lake Erie. We mention this because Harvey tells us the Simcoe location has been No. 1 in Canada for 10 years in a row despite its very rural location.

The entire demographic market just for products and services within the existing franchise areas of SILVER CROSS is expected to double within 25 years. In other words, a plethora of people are going to be in need of a lot of medical assistance equipment.

Twenty years ago scooters were few and far between with just one or two main manufacturers. Now there are scooters just about everywhere, and thereby grows the market with people realizing the potential for their elderly parents or disabled relatives to become more mobile.

The products Harvey is able to provide at much lower cost means mobility for a great number of people who otherwise would have to go without. They simply couldn’t afford the thousands of extra dollars needed to purchase the equipment right off the assembly line. Not surprisingly, there was noticeable pushback from a number of suppliers when SILVER CROSS first started to gain traction in the early years, concerned it would create havoc within the marketplace by taking away new sales.

“Our opinion is we’ve created a market beyond the new products,” Harvey says. “It’s not been replacing the purchasing of new products; it’s been supplementing it with people who wouldn’t necessarily have gotten the product.”

There’s something called the assistive devices program designed to help people who don’t have a lot of money to purchase a wheelchair in Ontario. But as Harvey tells us, that amount of money hasn’t changed in a decade despite a huge increase in demand.

Besides the buyback system whereby SILVER CROSS will take back the equipment when it’s no longer needed, Harvey says the company does well on referrals when looking for additional equipment.

“We get a lot of referrals from the agencies and healthcare professionals,” he says. “Even our competitors recommend us as a solution to selling equipment.”

One of the misconceptions is that there is an abundance of this type of equipment, but that just isn’t the case, as Harvey confirms.

“You can never get enough,” he says. “And it’s pretty much always sold immediately with a fast turnaround.”

As mentioned off the top, SILVER CROSS franchising will extend across Canada with plans to open 36 additional territories over the next two years and then build out to as many as 57 in the United States.

“We targeted the areas we are not in, including the Greater Vancouver market,” Harvey says. “We want to create a small cluster of locations to synergistically market and trade used equipment within the group.”

“One of the reasons we have grown relatively slow is because we’re really looking for the right person as opposed to selling a franchise,” Harvey says.

Each franchise location typically consists of three or four employees: the main franchisee owner, who handles the overall operations and marketing; a client care coordinator and either one or two technicians, depending on the size of the particular location.