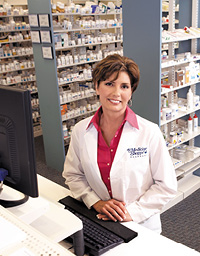 One of the many conveniences of modern Canadian retail is the big box store where everything from gardening tools to groceries can be purchased in one place.

Convenient, possibly. But specialty, there is no way. So to offer a counter to these behemoths of merchandise, specialty stores are finding great success in niche markets with finely tuned product offerings and customer service.

Nowhere does this service model seem more sensible to me than in retail pharmacy. Grabbing a wrench while you’re shopping for suntan lotion is one thing, but do you really want to pick up your loved one’s heart medication in an aisle next to pool supplies? The success of Medicine Shoppe proves that many people do not, and that most customers want a pharmacy with a pharmacist they know and trust and who they can speak to about their health concerns and changing medical needs.

Medicine Shoppe is the pharmacy for and by pharmacists. It was brought into Canada in 1991 by Daryl and Barry Katz. Daryl, a franchise lawyer, and his father Barry, a successful pharmacist, both had a deep regard for the profession which they felt was deserving of a client-based service oriented pharmacy. To quote Barry, “It was clear that even though on the surface it seemed like big box, convenience-oriented drugstores encapsulated the way the industry was heading, that type of atmosphere would not be the right fit for every kind of customer, or for every kind of pharmacist.”

The Katz duo looked to Medicine Shoppe International, a St. Louis-based franchise pharmacy chain that places as high a premium on pharmacists and customer relations. They secured the Canadian master license for the franchise. Medicine Shoppe was to be franchised by pharmacists who owned and operated their store, providing a stalwart dedication to their patients with a focus on dispensing prescriptions and being a health care resource for customers.

In 1992, the first Canadian Medicine Shoppe Pharmacy opened and, over the past 19 years, Medicine Shoppe has grown to serve customers from British Columbia to Newfoundland and Labrador with a customer base comprised mostly of baby boomers and seniors. Medicine Shoppe business model caters to patients who have complex medication profiles and/or disease states and who seek a pharmacist who supports their desire to be proactive about their health and wellbeing.

What was a radical idea at the time, one that went against the grain and trend toward big box stores, has proven to be just what the doctor ordered for the millions of Canadians who rely on Medicine Shoppe for clear, concise information, attention to detail, and conscientious patient care.

“Medicine Shoppe provides a strong professional pharmacy program geared toward pharmacists who want to own their own business. It provides them with the tools and resources they need to be successful in a small professional pharmacy,” says Pharmacist Ross McKay, Executive Vice President and COO, who came to Medicine Shoppe in 1998 after 10 years of pharmacy management experience with Overwaitea/Save-On-Foods and Walmart.

McKay adds that Medicine Shoppe addresses patient needs through its welcoming environment and a stalwart dedication to patient care, including regular screenings, seminars and wellness events all of which enhances and cultivates the patient-pharmacist relationship.

Since 1992, Medicine Shoppe has expanded every year at a rate of about 10 to 20 pharmacies a year, growing to meet Canadian demand for customer care. “We expand with pharmacists who are looking for a specific opportunity—the opportunity to be an owner-operator in a practice environment where they control the level of interaction and care provided to their patients,” says McKay.

“One of the first advantages, franchisees are not employees—they are owners of the business and they have access to this entire franchise system,” says Murray Whitby, Vice-President of Operations and Marketing. Whitby believes that this control over their work environments and ability to give greater attention to patient interaction is at the core of pharmacists’ satisfaction with the Medicine Shoppe model. Rather than diverting their attention to aspects of retail management (returns, merchandizing, non-medical supplies, etc.), “They want greater control over their professional life, where and how they spend their time and energy, but also control over their lifestyle and their financial destiny.”

By joining Medicine Shoppe, owner-operators are given the advantages of the franchise’s financing partnerships and programs, reputation amongst its vendors. Medicine Shoppe’s size allows pharmacists the buying power of the big box competitors with the strength and resources equivalent to a 1,800 store chain while encompassing the spirit of an independent pharmacy dedicated to giving every customer the time and attention they deserve.

Owner-operators have also responded positively to the admission into a community of fellow pharmacists, and the benefits of resource sharing at conventions and regional meetings for continued professional development. Medicine Shoppe fosters a team spirit, whereby the collective responds to individual franchise challenges. “Our regional operations manager are the first line of support, offering help in person, over the web, or over the phone,” says Whitby. This collective approach and the Medicine Shoppe business model ensures the pharmacist has the tools he or she needs to balance the business side of the company with providing exemplary health care.