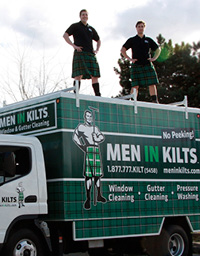 In this day and age where competition in business is a constantly surging reality, it goes without saying the need to differentiate oneself from the masses provides a definite advantage, assuming of course the quality of work ranks amongst the elite.

The willingness to be creative and think outside the box can directly be attributable for the huge success of Men in Kilts, a company that started 10 years ago in Vancouver by a young man named Nicholas Brand who had nothing more than $500 and rusted out Honda to get his business idea off the ground and into action.

Ironic perhaps that his surname name is Brand – which is the essential component to promoting long-term business success and a vital cog in being remembered by clients – unique branding. And what better way to do it than with a bunch of young strapping men wearing kilts.

“The kilt thing just sort of came out of nowhere,” Brand tells us. “I was 24 at the time and wanting to start my own business and needing to hate my job enough to leave. I did some research for a few months before leaving my job at the time.”
He can laugh about it now, but clearly Brand did in fact hate his former job, working as a kitchen manager for a restaurant chain. How is it obvious he hated that job?

“I didn’t like cooking,” Brand heartily laughs. “It was one of those things were you get hired as a busboy at 17 and work your way up, and the next thing you know you’re managing. I cook macaroni and cheese when I’m at home.”

Much of Brand’s inspiration to go down the entrepreneurial route was based on two of his high school teachers, who owned businesses on the side. They also happened to be two of the teachers he respected most and took notice of what they had done with their careers.

“They did teaching for the love of teaching, not necessarily for the paycheque, and it really came across,” Brand says. “I also have an uncle, who’s now retired, who owned a concrete-cutting business. He’s a trained physiotherapist but there was a time when he was struggling to find work. He got into concrete cutting and retired at 55, has a place in Okanagan Lake, travels all winter. Brand compares those outcomes with that of his own parents, where his mother lost her job due to the Air Canada-Canadian merger and his father was let go from his job after 17 years with a company when a new vice president came aboard.

“They were going through all that, and I saw my uncle retiring to the lake,” Brand recalls. “In my late teens to early 20s I was very highly influenced that I needed to own my own business.”

But starting out on a solo venture is not for the faint of heart. It takes a lot of planning, determination and hard work. Despite the obstacles, Brand had no doubt it was the direction he would take.

“I knew I needed to start something on a shoestring budget,” he reveals. “I wasn’t going to open a restaurant. I looked at landscaping, painting, window cleaning – the thing that most people on a tight budget will look at, and I settled on window cleaning.”

After the decision to launch the business, Brand, his wife and a close friend sat down to try and began brainstorming in an effort to come up with a catchy name for the company.

“We were having a drink out on the patio brainstorming and he blurted out ‘you should wear you kilt because you’re Scottish’,” Brand tells us. “We all had a laugh about it and then afterwards thought that was not such a bad idea. The worst case is that nobody is going to forget us.”

Brand admits that when thinking back to that time sitting on the patio, none of them envisioned it would evolve into what it has become, so needless to say the success has been a pleasant surprise. That said, he also believed it would return positive results.

“I think the stand out from the crowd point it was a feeling that this might work,” Brand says.

The niche idea of a kilt was just off the cuff and so Brand went with it, but he says a lot of his inspiration, especially as it relates to franchising came from another highly successful business.

“I had a close contact working at 1-800-GOT-JUNK at the time and we’d have lunch once a month and shoot the breeze and pass along ideas. I’d pick his brain on how certain things are done. The inspiration behind having a company like 1-800-GOT-JUNK in our backyard played a big influence, especially in the early years.”

Brand was a one-man show at Men in Kilts for more than a year, but he did get a lot of support from his wife, who helped deliver flyers door-to door and is also the one who hand-sewed the first few kilts worn by her husband to work.

“They were made from a Halloween pattern we found at a fabrics store,” Brand chuckles. “It’s the only kilt pattern we could find to sew.”

After that first year, Brand landed a major contract cleaning a huge townhome complex and so he brought one of his friends onboard to help expedite the job in a timely manner. It was about three years into the business – 2005 – that Brand found himself in need of hiring full-time staff. A year later Brand brought on a business partner named Brent Hohlweg who is the company’s chief brand architect, whose main focus is to expand the brand and messaging of the company through various communications methods, including social media. Hohlweg also made it a priority to brand the company name and improve the corporate website. The Vancouver location now has 12 employees and often hires seasonal helpers such as summer students to help out with the additional workload.

“With Brent’s investment we wrapped our first vehicle in tartan and within a year we exploded,” Brand notes. “That first year together I think we tripled sales from what I was doing as a one-man show.”

By 2009 the company was continue its impressive ascent, gaining more and more clients, and so Brand and Hohlweg decided it was time to bring on a chief executive officer. They hired Tressa Wood, who had been an executive with 1-800-GOT-JUNK in the role of VP of Operations.

“Brent and I knew we were sitting on something big,” Brand says. “You’re out there every day and you’re wearing a kilt and you’re driving around in a tartan truck – the number of people that would come up to us and say ‘man you guys are going to be so huge, this is brilliant’ you start thinking to yourself, okay what do we do with it then, taking it to the next level?”

It was at this point when Brand and Hohlweg turned their focus on franchising, but knew that going down this route was going to be a big step. The backend work is enormous, including the systems and training being in place, not to mention all the legal aspects to cover off.

“We knew we needed help,” Brand notes. “It just so happens we had an article in a Vancouver newspaper in the summer of 2009 and Tressa had read it and sent in her resume. At first I looked at her experience and thought to myself ‘we’re not as big as you think we are’ but we started a conversation with her anyway. From a cultural basis she was a perfect fit – all three of us instantly got along and we all brought different specialties to the table.”

Men in Kilts currently has three locations in B.C., one in Calgary and south of the border in Seattle, where opportunity knocked, and so Brand and his team were only too happy to head in that direction, effectively becoming an international business.

“Before we franchised, we operated the entire lower mainland of Greater Vancouver which is close to 3 million in population,” Brand states. “It covers an area from Vancouver out to the Fraser Valley; it’s a massive driving distance of 90 minutes from one end to another. The first thing we did was split the territory into two franchises and brought on two partners to run the east side of the franchise and what their role was to test the call centre and training systems and pushing them and breaking what we could and fixing it from there so we were ready. They were pleased enough that they actually wanted to open Seattle.”

Poor weather is also no obstacle for Men in Kilts, with cold, wintry Calgary being a prime example, where they’ve aggrandized beyond the core business of window cleaning.

“Part of our growth has been providing expanded services to fit the city,” Brand reveals. “Calgary offers snow removal. But we’re not going to go way out in leftfield and start a painting division, but we can tweak our services. As example, we do a ton of gutter cleaning in Vancouver because it rains all winter, but Calgary does very little because it’s frozen.

In the early days, residential jobs were much more the norm, but as the company matures it gains the confidence of the commercial sector as being a trusted business. In Vancouver, Brand says the current ratio is now about 60:40 commercial. It takes time to create a reputation before a large office building is likely to trust the worthiness of the company. Most often it’s at least two people sent to a job, but of course it can be more if it’s a large office tower it may need six people, especially if it’s a tighter timeline.

Reaching high into the sky provides no technical problems for the folks at Men in Kilts, but their current legal limit is 50 storeys based on their liability insurance coverage. In fact, Brand says the extremely tall office towers are often easier to clean than the smaller ones.

Height clearly isn’t an impediment to carrying out the job. But given the unique working attire, high winds could prove a bit distracting.