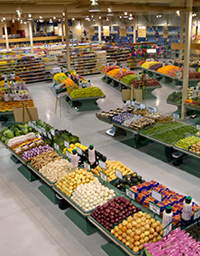 Tom Cunningham has been a loyal Michael-Angelo’s customer for years. Like many customers he is drawn to the fresh and quality produce chosen daily by the Mississauga-based independent franchise at the Ontario Food Terminal. Last summer, Tom had an operation which limited his mobility for a while. The staff at Michael-Angelo’s knew about this, and would deliver Tom’s grocery list to him while he waited in his car. Sure, it’s a small anecdote but it illustrates what type of business Michael-Angelo’s is; one that prides itself on being an important part of the neighbourhood, which wants its customers to feel like family.

“Because we are family owned and operated, [our customers] feel it’s their store and we love to provide that service to them,” says Michael Pugliese, President and CEO of Michael-Angelo’s. “When our consumer comes into the store, we want them to feel like it’s their store too and most of them feel that way because they see the same people all the time.”

The business was started by Pugliese’s father, Angelo, and many family members are involved with the supermarket to this day. “For almost half a century, the Pugliese family has been dedicated to a simple, but enduring principle—we will provide our customers with unrivalled quality, freshness and variety at reasonable prices,” says Pugliese.

After establishing and running a popular market in downtown Toronto for years, the family decided to branch out into the suburbs, a landscape overwhelmed with big-box stores. In 1972, Michael-Angelo’s opened in Markham. The company expanded again in 1985 to Mississauga with a full-service supermarket complex on a six acre lot. Customers responded to what the Puglieses were trying to accomplish—a fresh food market in a suburban environment.

Steady growth in the business and size of the stores hasn’t prevented Michael-Angelo’s from maintaining a stalwart commitment to the fresh quality products and better selection on which the company was built. To create this atmosphere, the periphery of the entire store is lined with produce, and an astounding 25 per cent of the floor space is dedicated to produce, “which is unheard of in the supermarket business,” notes Pugliese. “When you walk into the store, you instantly recognize this is not your typical set up.”

Both Markham and Mississauga are proudly ethnically diverse communities, something that is reflected on the shelves of Michael-Angelo’s. Knowing that today’s customers have a variety of options, the store caters to the customer looking for a range of flavours and foods.   The stores proved an international group of products for the growing Asian and Indian markets and provide the old-world European brands customers cannot find elsewhere.

Further distinguishing itself, Michael-Angelo’s has a reputation of providing organic and gluten-free foods,  years before it became the domain of the specialty stores. “Whether it is frozen products, dry products or baked goods, we try to bring in as much of those types of products,” he says. “Over the years we have evolved into a store that carries superior quality at supermarket prices.”

The importance of convenience

With a foot placed firmly in the tradition, Michael-Angelo’s is branching out and embracing technology to better serve customers and to suit their lifestyle. The company has implemented a new on-line shopping service where customers can place an order to be delivered to their front door.

“We recognize that our survival as an independent depends on these niche markets. During these times, we have to be more competitive because we are smaller,” says Pugliese.

At a time when major supermarket chains are struggling to stay alive, Michael-Angelo’s simple approach has resulted in healthy profits. The company is considering potentially revisiting its roots and opening an urban market in the near future because it believes it has implemented a winning team. “Expansion is in the horizon,” says Pugliese. “We have the people that have been with me for a long time, our corporate environment has changed. Our key employees have been there for 15 to 20 years. They know the standards and what they need to do in order to achieve those results.”

Michael-Angelo’s is singular in its position as a middle ground between high-end and mass market chains. Having carved out a perfect area in the market, Michael-Angelo’s is a thriving Canadian business whose success is the result of staying on trend with the market, knowing its customer base and providing consistent quality products.