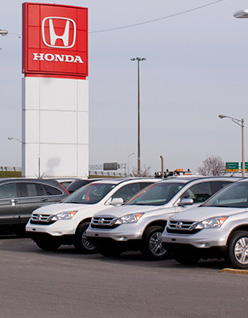 It’s a move that has been all smiles for Midtown Honda, the former Dalt’s Honda dealership that relocated from the Toronto intersection of Eglinton and Caledonia to a more prominent site adjacent to Yorkdale Shopping Centre.

Midtown Honda has seen a tremendous increase in traffic at its new home. Moving to a more spacious premise, with nearly four times the available space, the new location has proven to be more accessible. An easy trip from Highway 401, Midtown Honda is easily accessed from different parts of the city.

Now in its second month at its new location, Midtown Honda has already set record numbers in three major sales categories, including an increase in showroom traffic of more than 200 per cent.

The new facility offers expanded and renovated space, as well as multiple buildings. Midtown Honda has increased service capacity, more service bays, in addition to more inventory for new cars and previously owned vehicles. Customers can also use a three-lane drive-thru for even faster service.

Brian Tafler, General Manager with Midtown Honda, spoke with The Canadian Business Journal this month about the exciting developments and renovations occurring at the new dealership.

“We were looking for more space and area because we were operating on four properties at the time. We were landlocked as a dealership,” Tafler explained.

“We looked for a location for a long time and then we were able to negotiate with the previous owners of this location.”

“In some ways, because of our size and being in an older building, things our competitors had that we didn’t have forced us to be better [at customer service]. We know our customers on a personal basis. We also have a lot of employee loyalty, especially in the service end.

“That holds true to where we were before. We are now trying to keep that same philosophy here.” Part of Midtown Honda’s business structure is built on the referral business. Impressively, most business of Midtown Honda lives off of referrals, rather than the industry standard of advertising. As Tafler explained, “We want to make sure we continue to live off referrals because that’s how we like to do business. If people like you, they tell lots of people. And if they don’t like you, they tell even more. We pride ourselves on our customer satisfaction.”

Being an environmental company

Much of the move for Midtown Honda is about the future and, alongside that, business growth. The brand and the dealership sees itself as an environmental company, one that serves as a strength for the company.

Honda strives to be a leader in fuel economy and continues to support and invest in hybrid technologies. The overall philosophy is to ensure that every vehicle in its fleet is of best-in-class fuel economy.

Once the renovations are finalized at the new facility, Midtown Honda plans to transform into the “best dealership for customer focus”, easily accessible for those customers. After moving from its old location in a single day, with 18 movers and three moving trucks, Midtown Honda retrofitted its new facility, adding to its service level capacity, and reconfiguring the facility to maximize the new space, key to the dealership in handling its increase in traffic.

“We have a lot of repeat clients—currently we have close to 7,500 active service customers, who have been in for service in the last 12 months, so we have a large service base and that will only continue to grow as we sell more vehicles.”

In tougher economic times, Midtown Honda has forged ahead from the fierce competition of the automotive world. As Tafler summarized, “This is the business we are in, and if we’re going to be in it, we want to do it well. We make sure that we give our customers what they are looking for.

“Everyone is really happy with the move…staff, customers, and obviously myself.” 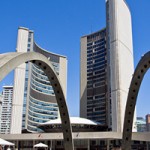 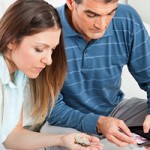