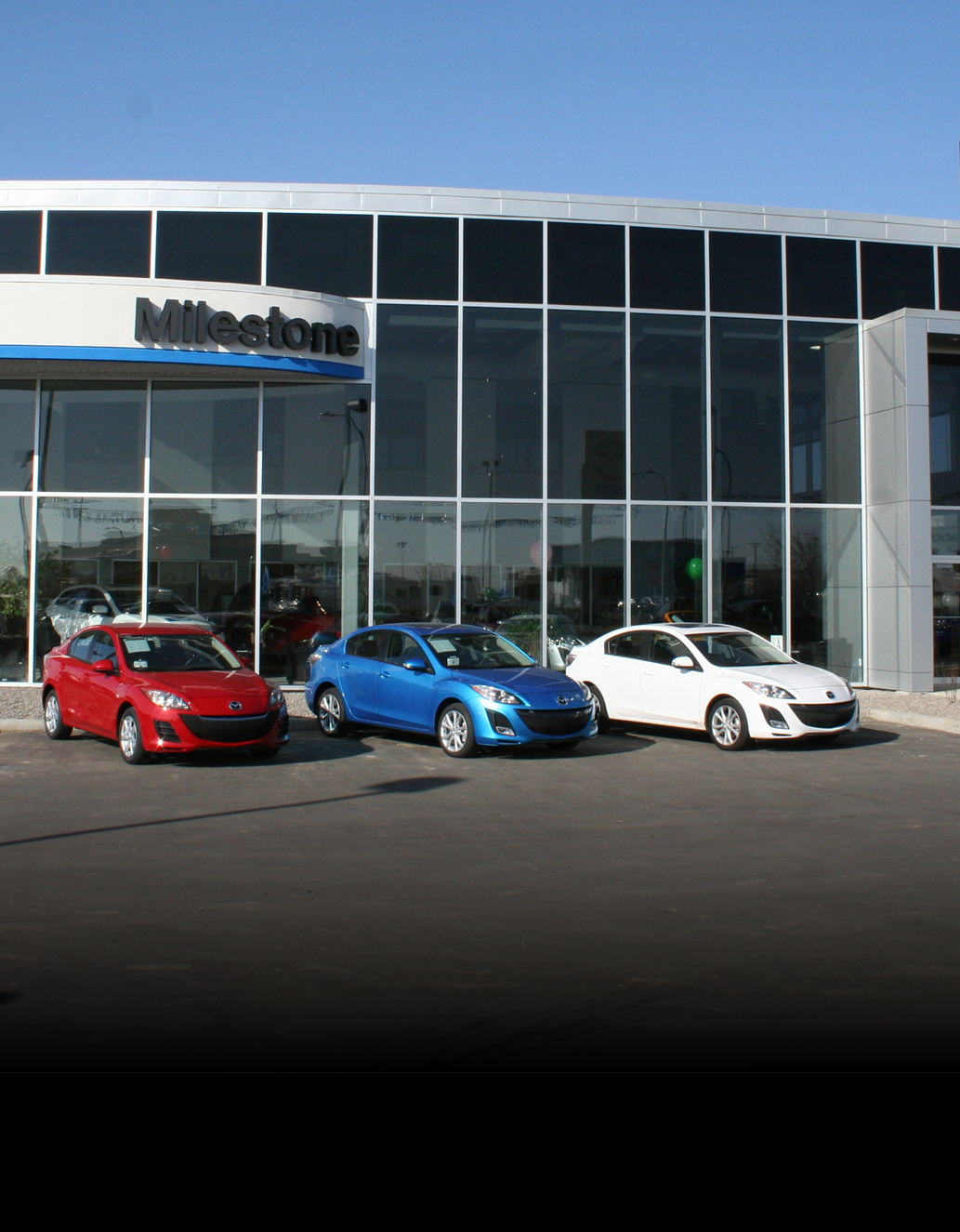 A family-run organization, Dealer Principal Barry Dubnyk joined Milestone Mazda in 2008 after spending the earlier part of his working career with IBM. Joining the Milestone family, Dubnyk has used his acquired skills to bring a fresh perspective to the automotive world, adapting his sales, customer service, process, and people management background to Milestone Mazda.

As a dealer of new and pre-owned vehicles, Milestone Mazda recognizes the importance of customer service and that buyers are the lifeblood of the automotive dealership. Dubnyk, along with his wife Barb, son Dave (Fixed Operation Manager) and friend and partner Alex Pilgrim (General Manager) drive the buying experience by treating every customer well and honing the dealership’s small town, family feel.

Milestone Mazda is all about providing value and a great customer experience. “We treat the customer like our business depends on it, because it does,” Dubnyk told The Canadian Business Journal. “We’re trying to overcome the stigma of the car industry. The tough part is that you can only do it one customer at a time. We treat our customers like family, and we get a lot of good feedback where our customers felt important and that they were treated extremely well.

That’s what we’re trying to accomplish.”

“Just recently, we had a buyer who wasn’t able to get in to pick up her car, so we delivered it to her driveway. It was a pretty neat buying experience for her and the first time that she had ever bought a car and had it delivered to her house. Would we do that again? Absolutely.”

Outside of its doors, Milestone Mazda is involved in a number of charitable organizations, in particular Big Brothers Big Sisters of Lethbridge. Mostly recently, the dealership kicked off its penny-collecting campaign. Beginning with a single jar and soon growing to 30 businesses across the community, Milestone Mazda collected more than $3,000 in pennies (300,000 pennies and 1,700 pounds altogether, gathered in a 50-gallon fish tank at the dealership). The initiative was a fantastic fundraising event for Big Brothers Big Sisters of Lethbridge and it created exceptional awareness for the organization.

As past President of the Lethbridge Auto Dealers Association, Dubnyk coordinated 14 local dealerships in a fundraising effort that contributed $1 million to the new Trades Centre of Lethbridge College, a key investment to support local skills development and labour shortages within the industry.

Milestone Mazda is also involved in a number of other local fundraisers and charitable causes. In an interesting twist, Dubnyk’s son Devan, star goaltender for the National Hockey League’s Edmonton Oilers, serves as a partner with Milestone Mazda and brings a different perspective and set of unique fundraising opportunities to the business.

Front of the Pack

Although it is seen as a small name brand across the automotive sector, Milestone Mazda recognizes that it has a great product. For one example, customers want exceptional fuel economy, and Mazda is exceeding that demand. Mazda’s SkyActiv technology means cars are more powerful, more fun to drive, and are more fuel efficient. From the 2014 Mazda 6 to the Mazda SkyActiv CX-5, Mazda is offering customers phenomenal fuel efficiency across its entire product lineup.

From a growth perspective, Milestone Mazda has pulled ahead from the economic recession that took its toll on the automotive sector, and has seen sales increase more than 35 per cent over the past two years. Additionally, in 2009, Milestone Mazda unveiled its new facility, bringing forward a new image for the dealership and a major expansion for its parts and service department, furthering the company’s customer service commitment to provide best in class service.

Dubnyk is quick to credit the Mazda lineup and the team around him as a means to the dealership’s success. The company sees the passion and enthusiasm in its team and builds on these attributes each day. At Milestone Mazda, the employee philosophy is “hire for attitude, teach for skill”.

“We want Lethbridge to be ‘Mazda Country’,” Dubnyk beamed. “We want to continue to sell more Mazdas. We take a lot of pride when we see Mazdas out on the road. To me that says not only is the product doing a great job, but we are as well, and we can continue to see customers come back to buy Mazdas because they like the car and because they like us.”