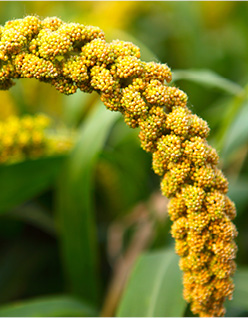 Rich with protein and nutrients, millet is a small seeded cereal grain crop. Healthy and found in a variety of food products and animal feed, millet is typically farmed in harsh farmlands, though its size allows for rapid and expansive production.

Reynald Gauthier, President of Manitoba-based Millet King Seeds, bought his first farm in 1990 and now has more than 20 years of experience growing millet.

Today, Gauthier has his sights set on a major company expansion, with plans to grow through its latest development, Millet King Foods.

In its initiation, Millet King Seeds began by distributing millet and fodder to various animal feed markets. Millet sales prices averaged 19 cents a pound, and over time the market did not prove overly lucrative for Millet King Seeds. Then, in 2003, a market-wide crashed saw millet selling for as low as six cents a pound. Decidedly, more was needed, and it was at this time when Gauthier began investigating alternative business opportunities, showcasing the values of millet with presentations across Western Canada, notably in nearby provinces Alberta and Saskatchewan.

Following successful shows in Camrose, Alta., and Lloydminster, Sask., Millet King Seeds watched as its sales in the following year climbed to more than 250,000 pounds of millet. As a one-man operation, as is still the case today, Gauthier endeavored through the entire works, from production through to final delivery. These efforts now have the company poised for growth.

Food rich with healthy ingredients like millet is becoming more in demand by consumers. Accordingly, Millet King Foods was founded to offer a selection of healthy, gluten-free foods, such as whole millet, millet flour, millet cereal, bread, waffle and pancake mix, and even beer. Whole millet and millet flour also uses the complete seed, meaning there is no wasted nutrition. Demand for these products has given farmers like Gauthier even more incentive to grow millet. More than 600 farmers across Western Canada now produce millet.

“A lot of people are now taking care of their health and want to go back to what we were eating 40 years ago and start cooking. Millet will be a big part of that,” Gauthier said. “People are starting to change, going from processed foods to getting it as fresh as they can. Millet is one of the oldest grains in the world, it is very nutritious, and it is just an awesome seed to work with, it is unreal, there is no junk in it.”

Soon to be released, Millet King Foods will offer a selection of in-demand products. Some of these products have already been on display at the Brandon, Man. Great Manitoba Food Fight, a competition where food creators square off to present the best new, innovative, and delicious food and drink products, with the top winner receiving a $15,000 prize, funding which is typically used to take the winning food concept to the next level.

“New products emerge from someone’s popular family recipe, the need for a specialty item to meet a dietary requirement or a perceived missing link in the public’s food chain. There is no limit to a good cook’s imagination and we are pleased to challenge and support the entrepreneurial drive of Manitobans through this competition,” Agriculture, Food and Rural Initiatives Minister Ron Kostyshyn said in a statement.

“This outstanding annual competition has been the launching pad for many exciting and innovative food and beverage products. It is helping to keep Manitoba a leader in new product development by encouraging and supporting the entrepreneurial spirit of people who live, work and raise their families here.”

In previous years, Millet King Foods’ millet beer won second place in 2010 and its millet cereal was awarded the bronze medal last year. This year, Gauthier is hopeful his millet bread recipe is enough to take home the top prize of the baking competition.

Tested, liked, and with a “99 per cent” approval rating, demand is growing for millet. As such, Millet King Seeds envisions a future plan to open small retail outlets to distribute its product. Five years from now, the goal is to have 500,000 acres of millet, grain to be purchased and produced, and to have 1,000 stores across Canada.

Gauthier commented, “I’m doing everything on my own, but when I start making food products, we’re going to employ a lot of people and it’s going to be good for our town. We will employ thousands of people, hiring professional people to work with me in my plant, having people grow it, as well as inspectors, graders, delivery trucks, etc., across Canada, the United States, and around the world. It is growing and I am having too much fun.”