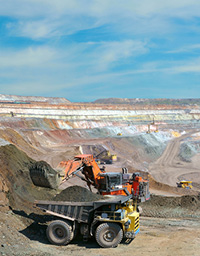 Internationally, Canada is one of the preeminent mining countries and one of the macroscopic producers of minerals and metals. Mining accounted for 21 per cent of the value of Canadian goods exports in 2010. Exports of aluminum, copper, gold, iron and steel, iron ore, nickel, silver, uranium, zinc, diamonds, potash and coal ranged from $1.7 billion to $15.1 billion each. Canada remained the world’s top destination for exploration spending in 2010, hosting 19 per cent of global investment. Australia followed at 12 per cent, the United States at 8 per cent and Mexico at 6 per cent.

While mining is vital to Canada at the local community level, it also contributes directly to the economy of established urban centres.  Toronto’s stock market is a global hub for mining finance; the TSX handled more than 80 per cent of the world’s mining equity transactions in the past five years. Vancouver boasts the world’s leading cluster of exploration companies, while Montreal is home to major aluminum and iron ore firms. In the northwest, Edmonton has become a global hub for oil sands expertise; Saskatoon for uranium and potash, which is the key ingredient in fertilizer.

The Mining Association of Canada (MAC) is the national organization of the Canadian mining industry. It represents companies involved with mineral exploration, mining, smelting, refining and semi-fabrication.

According to statistics from MAC, the average weekly pay for a Canadian mining worker in 2010 was $1,632, which exceeded the wages of workers in forestry, manufacturing, finance and construction by 72, 70, 56 and 53 per cent, respectively.

By nature, the mining industry is cyclical. After seven years of record growth, the 2008 recession sharply reduced mineral demand and prices, though increases soon followed through 2009 and 2010, driven by Chinese demand.  In mid-2011, with concerns over U.S. and EU debt and inflation in China, market uncertainty returned, as did weaker demand and prices.  And of course, the big delays announced by Vale and BHP Billiton.

“You’re seeing a bit of this all over the world,” MAC President and CEO Pierre Gratton tells us.  “Barrick also announced delays with its projects in South America.  There is a softening of the market; it’s a cyclical industry and we’re in a less robust period.  I don’t want to call it a complete downturn because, relatively speaking, commodity prices are still pretty high by historical standards. Everyone I talk to in the industry still remains very bullish about the long term.”

One of the keys is being able to time the projects correctly to maximize potential.  In the case of Vale, the time for potash may not be perfect and so the corporate decision has been made to hold off until production is taking place during an up-cycle as opposed to a down-cycle.

“There isn’t a perfect science to this, but they are trying to time things right,” Gratton continues.  “There hasn’t been any indication – nor would I expect to see one – of a lack of interest in Saskatchewan’s potash industry because we’re the largest potash industry in the world.  I think the future is very positive for Saskatchewan in that business.”

Gratton says China will continue to be a major international driver as a consumer of commodities such as potash, iron ore, copper, nickel, coal or uranium; everybody remains bullish about the long term.  But in the short term, many smaller junior mining outfits are struggling to keep their heads above water, something Gratton readily admits.

“These are tough times for the junior sector,” he acknowledges.  “They faced something quite similar in 2008 when it was very hard to raise money and then things started to come back.  Unfortunately there is once again a lot of skittishness on the markets.”

The major exploration companies continue on with their missions, despite many economic uncertainties.  Gratton believes Canada will continue to do better than many other countries, but in a stifled market, it leaves a muted sense of enthusiasm at best.

“We expect to see exploration numbers fall back from – what I might add – were record-breaking years, but this is a sector that’s used to seeing this and they’ll come back when the times are right,” he says.

Another source for optimism according to Gratton is that the Port of Vancouver recently reported that volumes remain strong and in fact are at record levels, which means Canada continues to ship products out.

“One thing I would emphasize is that I think the industry overall is better positioned to weather this period than they were in 2008 which came much more suddenly and much more severely,” Gratton says.  “You’ve got a lot of companies with cash and healthy balance sheets that actually have the ability to invest, and they will invest; they’re just taking stock of what the right time is.  A lot of these projects are going to go forward, there’s no question.”

Through all the negative aspects, certain sectors such as gold continue to thrive.  Copper, even though it’s off from peaks of last year, is still showing a great deal of resiliency.  At the other end of the spectrum, aluminum prices are quite depressed in comparison to where it has been.  This is especially so for companies out in British Columbia.

When it comes to government assistance in keeping this industry robust with such things as incentive programs and grants, Gratton believes Canada is in an excellent situation.

“Canada is a much more tax competitive country than we were 15 to 20 years ago,” he confirms.  “When our board talks about priorities, tax issues don’t come up all that much.  It’s regulatory; it’s infrastructure; it’s people.  There may be layoffs now, but in the longer term we’re going to need more people because we’ve got a retiring, aging population.  The projections are 10,000 more workers a year for the next 10 years.”

With the need for such a massive turnover in human resources, there is a concern about training and availability.

“It is a concern and a lot of work is being undertaken to address the skills shortage issue,” Gratton states.

What companies are also facing more acutely in some jurisdictions than others is the matter of some rather lofty capital costs.

“We’re competing for a lot of the same equipment in other growth areas like oil and gas,” Gratton notes.  “In some cases you’ve got some very high and rising labour costs and in some major projects there’s a lot of infrastructure that has to be built and they could be in very remote areas, so there’s all that pressure on the cost side.”

Going back to the 1980s and ’90s many workers opted to transfer into oil sands mining and the oil and gas industry instead of targeting the more traditional minerals sector.  But Gratton says there is still a lot of potential for job growth right across the entire spectrum.

“There’s demand for workers right across the spectrum and the oil sands sector would still be described as a big sucking sound for workers, but there tends to be a lot of work everyone.  I think what you were describing was an era when the base metals side was struggling but in the last decade things have been much healthier.”

It can be difficult to compete with the higher wages offered by the oil sands, but as Gratton accurately notes, not everyone wants to live in Fort McMurray (or other areas where oil sands can be found).

The truth is, mining has never been – and never will be – completely environmentally benign.  It’s simply not possible.  Removing ore from rock, when the ore may make up less than 1 per cent of the rock’s volume, poses obvious technical and environmental challenges in order to access it. That said, MAC members have cut releases of major substances substantially over the past two decades and have become diligent in doing their part to conscientiously be as efficient as possible.

Furthermore, the mining industry continues its efforts to build a strong relationship with the Aboriginal community.  The current president of PDAC Glenn Nolan is the first ever Aboriginal to hold that all-important position and he’s being looked at as an individual who will be able to continue the progressive nature of a working relationship.  Progress towards cleaner energy will greatly depend on the availability of metals and minerals, essential building blocks for many clean technologies.

“Our program Towards Sustainable Mining is now fully implemented by members,” Gratton says.  “As an initiative with the requirements that are a part of it, it’s now fully up and running and we’ve had public reporting now for five years.  We can now demonstrate performance improvements, verified by third-party results.”

“What we’re now doing is expanding the reach of this,” Gratton divulges.  “The Mining Association of B.C. has signed on to this program. We are in talks with Yukon and have had talks with Manitoba so now we want to spread this beyond the MAC membership is one of the objectives.”

The program has to convey value and companies often need to be persuaded to come onboard.  From that perspective, the program has begun to develop nicely and take on its own identity and reputation with a solid track record, which Gratton and his team are encouraged about.