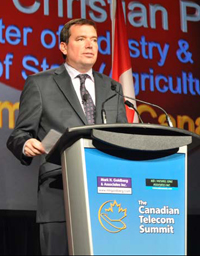 As Canada and the other developed nations continue the transformation into what is still very much a new digital age, it brings about endless opportunities for the future.

Minister of Industry Christian Paradis addressed attendees at the Canadian Telecom Summit in Toronto and also spoke with members of the media following his speech.

“Canada has benefitted from strong investment in telecom infrastructure and Canadians are benefitting from increased competition and choice for telecom services,” he said.

There are still challenges and concerns, including the need for additional spectrum to meet the growth requirements by consumers. Access to capital will be crucial for continued innovation while those living in rural parts of the country need to be linked to faster speeds and more responsive services.

“These are important challenges because we know that digital infrastructure and technology are critical to success in today’s economy,” the minister continued.

“Going forward we must continue to support robust investment, innovation and consumer choice in our telecom sector.”

“I know that we can rise to the challenge, but each of us has a role to play.  Our creators and innovators need to develop the new technologies that will propel the industry forward.”

Internet service providers are still in the process of linking all Canadians from the Pacific to the Atlantic and north to the Arctic.

“We as a government need to provide the support the sector needs to grow and thrive.  Last year I referred to the telecom industry as the foundation of our digital economy.  That’s still true today as we see 4G networks roll out.”

As Canadians are doing more with their wireless communications devices, usage is growing exponentially.  But with enhanced capabilities included on smartphones and tablets, it puts added pressure on the network infrastructure and increases the need for spectrum.

“Last year I said we would release additional spectrum and as you know we have announced new auctions for 700 and 2,500 MHz bands,” Paradis said.  “To support competition and investment we’ll be applying caps in both auctions.  This will enable at least four companies in each licence area to secure spectrum.”

By doing this the government is ensuring increased competition in the market and more choices for Canadian consumers based on their individual needs and requirements as well as budgetary considerations.

“Last year I also reported that we were reviewing our tower sharing policy and we’ve taken action here as well with concrete changes that will increase transparency and improve key provisions.”

In addition to access to spectrum, telecom companies also need the capital support in order to invest during the auction and expand their networks.  This is especially the case for the smaller players such as Wind Mobile, Public Mobile and Mobilicity.  Some of the smaller telecom companies declared that it would be vital to allow foreign investment in order to level the playing field.

“I personally committed to improving access to foreign capital.  We started by lifting foreign investment restrictions for companies holding less than 10 per cent of market share.”

“We’ve also committed $400 million to create large-scale venture capital funds led by you, the private sector. This was in addition to the $100 million for the Business Development Bank of Canada transfer capital activity.”

According to government figures, Canadian telecom providers invest more than $8 billion a year to provide faster and more robust services.  Paradis says the government and Canadian consumers are now looking to these service providers to deliver even higher speeds while geographically extending their digital footprint to help close the urban-rural gap.

Since receiving the Jenkins Panel Report on innovation, Paradis says the government has implemented several of its key recommendations to spur technology development.

“We have set aside $110 million a year for the National Research Council of Canada’s industrial research assistance program, known as IRAP,” noted the minister. “This doubles the support of the small and medium-sized firms.” A significant share has been allocated to the telecommunications and technology companies.

“We are encouraging our small to medium-sized businesses to adapt technologies through the Business Development Bank of Canada Smart-Tech Web Services and Loans Initiatives and the $80 million digital technology adaption pilot program.”

The federal government is becoming a first customer through the Canadian Innovation Commercialization which allows companies to bridge the pre-commercialization gap for their innovative goods and services and opens the potential to reach new markets.

“To be a productive, world-leading economy, Canadian companies need to invest more in technology, which was a central theme during the meetings with my provincial and territorial counterparts.”

“We are also building a modern legal framework that will protect consumers and businesses alike,” Paradis continued.  “We have started by proposing amendments to our privacy laws and enhance consumer confidence in the online marketplace.  We will continue to ensure that our country’s laws adapt to the realities of a digital economy.”

The Canadian digital economic strategy continues to be molded and is likely to continue changing as new innovative solutions come to the forefront.

During the post-speech media interview, the Minister of Industry was asked why there was such a delay in rolling out the digital economic strategy.

“We’ll have to live with this strategy for quite a while and it’s been a busy year and we had huge steps to achieve, and they have been,” he replied.  “Now we need to determine where we want to be in the future and we were waiting for ideas coming from the Jenkins report and we understand that the private sector has to be the leader here.  The idea is to have our public policy to support as much as we can but down the road the private sector has to take up. We have to make sure the adaption of these technologies is done because we lag in terms of competitiveness, so this is why we waited for a lot of input from different parties.”

During the summit, Telus announced it wanted to see foreign investment restrictions lifted for all telecom companies, not just the smaller ones holding less than 10 per cent market share.  However, it’s evident by the reaction from Paradis that this is not going to be happening anytime soon – if at all.

“We would need to hold public hearings and this is not in the cards for now.”

Bell has said leaving matters as they are would effectively create a two-tier system if the larger telecoms are limited in their ability to have foreign ownership.

Bell’s concern is that a foreign entity could come in and purchase two blocks in the next auction whereas the incumbents would be limited to one prime block.

Speaking as one of the smaller fledgling telecoms, Mobilicity CEO John Bitove would like the government to put caps on wireless roaming fees.  It’s something Paradis confirmed he is aware about.

“We are consulting now and I encourage all companies to make their representation; timing is of the essence now so I invite everyone to submit their observations.”

Bitove, who was a one-time co-owner of the NBA’s Toronto Raptors, would also like to see Canadian developers of mobile applications for communications devices such as smartphones have the ability to raise money much the way it’s done with junior resource mining companies, through flow shares that provide tax incentives for investors.  According to a recent Google survey, the average Canadian smartphone user has about 25 apps on his or her device.  It’s believed Mobilicity’s subscriber base has now risen beyond the 200,000 plateau nationwide since coming into existence in 2010.

An issue that has been passed around like a hot potato between the Ministry of Industry and the CRTC revolves around the availability of connectivity for the low-income sector of Canada.  Paradis says it’s more of a CRTC matter to implement this type of system but the CRTC claims it doesn’t have the financial resources to make such a program happen and would require funding to make it happen.

“This is why we have to better understand what the system would look like.  We are in the context of austerity but it doesn’t preclude us from looking into good ideas.”

More and more spectrum is going to continue to be needed, but when asked whether the government is currently looking at releasing additional frequencies beyond the upcoming 700 and 2,500 MHz spectrums, Paradis said it is something that still needs to be determined through consultation and extensive review.

Compounding the problem from a public perception point of view is that much of the new digital era remains exceedingly esoteric to a large percentage of Canadians, and therein lies a significant void, which is something Paradis agrees must be addressed by those within the industry.  Additionally, in the United States there are broadband caps from Internet Service Providers with tiered usage beginning at 300 gigabytes; tiered usage amongst Canadian ISPs are much lower.  The private sector needs to be compelled to take on new initiatives to bolster broadband usage, but they also need to be properly educated on how the system works, something Paradis wholeheartedly agrees with.

“This is what we are looking for and why we have programs like that.  We have to make sure the legal framework is there to generate consumer confidence about privacy issues.”

Paradis would not disclose any government projections in terms of expectations on revenue generation coming out of next year’s spectrum auction, although there have been estimates the final tally could once again surpass $4 billion.  The 2008 auction brought in about $4.3 billion to government coffers.

“The main goal for the government was to have a fourth player in each licence area,” diplomatically stated.

The lower frequencies such as the 700 MHz band are exceptionally attractive to the telecom companies because they have a much broader travel range and have the ability to penetrate buildings while also keeping a signal in such areas as elevators and underground garages where people have noticed in the past (and currently) that their calls would most often cut out.  The new LTE technology addresses those connectivity problems.