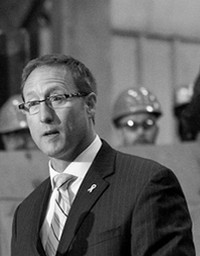 On January 12, Prime Minister Stephen Harper crossed the country to announce the $33 billion in shipbuilding contracts in Nova Scotia and British Columbia, lauded for heralding in “three decades of stability for shipbuilders across the country.”

The Prime Minster was joined by representatives of the provincial government, of Irving Shipbuilding and the Defence Minister Peter MacKay, who all gathered at the historic Halifax shipyards “to launch a new era in the life of this industry, to build on a great tradition, one that goes back 200 years.”

The National Shipbuilding Procurement Strategy (NSPS) will see the rebuild of the Royal Canadian Navy and the Canadian Coast Guard fleet, where a number of the ships are reaching the end of their operational lives. At $33 billion, the NSPS is the largest procurement sourcing arrangement in Canadian history, and is estimated to create thousands of high-value jobs over the next 30 years. The majority, at $25 billion, has been awarded to Irving Shipbuilding Inc. in Halifax.

There is no doubt this will be a major economic boost to the region. A report by TD Economics stated, “The impact to [the Nova Scotian] economic forecast is most noticeable in 2013, when shipbuilding production begins in earnest and federal funds are flowing.  Relative to our September call, provincial real GDP is now projected to be $228 million higher.  The economy should churn out 3,200 net new jobs over and above our previous forecast.”

“This will renew our federal fleet and will benefit the country as a whole in terms of the economy,” said Minister MacKay. “[This was] an extremely important announcement for our country but particularly for the shipbuilding industry, the Canadian Forces and the Coast Guard as well.”

“That to me is almost unprecedented in my lifetime that we are seeing this kind of confidence and the spirit of ingenuity returning to our region.

“We have been overjoyed with the way that the process itself was run. Clearly the results itself put shipbuilding in Canada on a very steady state going forward and it’s expected for example that this contract could create an industry, this is industry estimates, as many as 15,000 high value jobs—millions of person-hours of work.

MacKay says these contracts will have a ripple effect to smaller shipyards in Atlantic Canada, and have a positive effect on suppliers and benefits.

As a Nova Scotian, MacKay said he was “thrilled” when Halifax won the contract in an unprecedented transparent bidding process with input from several independent third party experts, overseen by an independent Fairness Monitor. “There was a huge celebration and you could almost hear the cheers all the way in Ottawa. As a Nova Scotian and somebody who worked here and grew up here, I know the importance of shipbuilding but I also know just the importance of work and steady good paying jobs and the impact that that has on the quality of life of Nova Scotians. It is almost immeasurable and the sense of confidence and buoyancy that you can feel in the city of Halifax is palpable; it had an immediate impact.”

MacKay also describes the contract as an “enormous boost” to the Navy’s confidence—for both people who are currently in the Forces and those who may wish to join. “This indicates Canada’s commitment to build the Royal Canadian Navy, to continue the proud tradition to give them the type of equipment they need to perform their tasks in defending our shores and participating in international missions.”