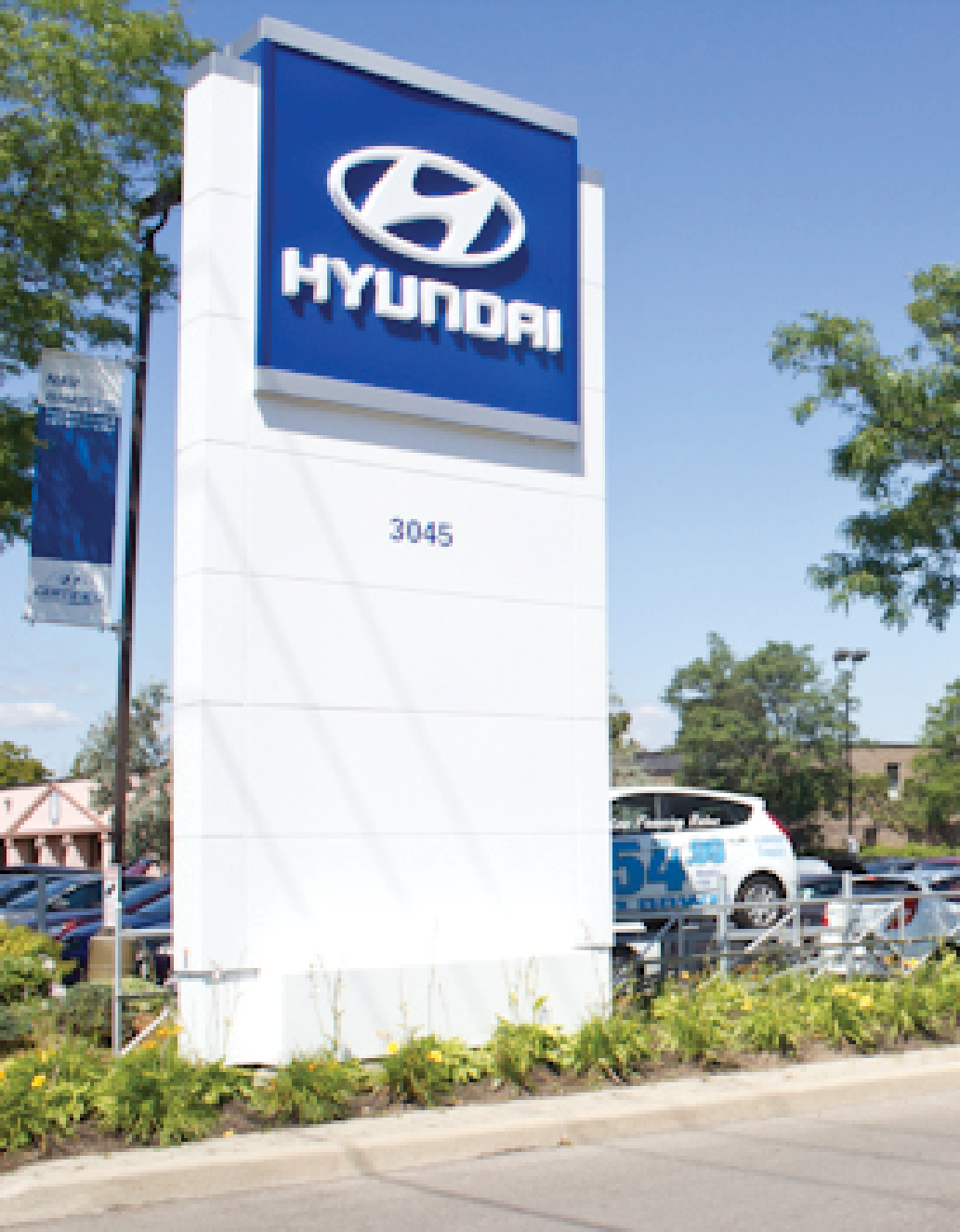 Dedicated to Quality and the Community

Mississauga Hyundai was established April 1, 1985 and from that very first day, owner Nav Bhatia has never looked back.

By the time 2007 rolled around, Mississauga Hyundai General Manager Michael Dukhilall wanted to try the retail side of a car dealership. He spent the previous 10 years with Hyundai Canada as a district sales manager and two years with KIA Canada. After telling many dealership managers how to make their dealerships successful, Dukhilall wondered if he could do the retail end of a car dealership. He made the transition to retail at Mississauga Hyundai as General Manager and in his first year there, 900 new vehicles were sold, along with 200 used ones. New car sales jumped to 1,850 while used cars posted a strong number of 500.

“I’d like to take credit for it, but the Hyundai brand is the major factor in these sales,” says Dukhilall. Parts sales also increased by $1.1 million dollars, from $2.3 million in 2007.

In 2009, General Motors and other North American auto companies were embroiled in bailouts and bankruptcies. Bhatia saw an opportunity to buy Laurie Williamson Motors, a GM dealership, when their franchise was not renewed. It was a big challenge, owing to the 10-fold increase in the size of the dealership from their previous one. The sales force doubled, service bays went from eight to 18 and the staff of technicians rose from seven to 14.

“It was just as well we did it, as Hyundai sales really took off,” Dukhilall says. Between 2007 and 2013, sales have doubled. This success prompted Bhatia to open a second Hyundai dealership in Rexdale, a northwest suburb of Toronto.

According to Dukhilall, Nav Bhatia is an astute businessman who has an excellent working relationship with Hyundai Canada. It’s a loyalty the goes back more than 25 years. According to Dukhilall, Bhatia owes a lot of his success to Hyundai Canada for their support as he was growing the business.
Dukhilall confirms that Bhatia is not only a shrewd businessman, but is very hands on, and not delegating to other employees. He is very accessible to all of the Mississauga Hyundai staff and always has his “ears to the ground” around the dealership.

In addition to running such a successful dealership, Bhatia has another passion in life – the NBA’s Toronto Raptors, of which he’s been a huge fan since the team arrived in Canada’s largest city. He is a season’s ticket holder and is extremely proud of the fact that he has never missed a home game. This accomplishment has earned him “superfan” status with the team.

Along with being a Raptors “superfan,” Bhatia works with the Air Canada Centre and the Raptor players, including incoming Raptors. When a new player joins the team, he supplies them with a vehicle from his dealership. It’s his way of being involved and connecting with basketball.
In spite of all of his documented successes, Bhatia remembers his roots when he immigrated to Canada and how Hyundai gave him the opportunity, to assist in the establishment of his dealership. In giving back to his community, Bhatia helps underprivileged children by giving out Raptors tickets to a number of children who would otherwise never have the opportunity to go.

In 2012, Hyundai Canada and Hyundai Hockey Helpers work in partnership with KidSport™, a national not-for-profit organization that provides financial assistance to kids and youth for sports registration fees and equipment. Mississauga Hyundai was the top dealership for fundraising for the program, raising $15,000 which helped equip 75 children from Mississauga with hockey equipment. Bhatia’s desire to pay it back to the community stems from wanting to say thanks for all of the opportunities he had when he came to Canada. Another way he is doing this is by being actively involved in helping South Asians integrate into the mainstream.
Bhatia was awarded the Queen’s Diamond Jubilee medal for his service to the community along with the Lifetime achievement award from the Toronto Raptors, recognizing is business acumen and “superfan” status.

Not so long ago, Hyundai was largely overshadowed by Japanese automakers. Journalists used to compare Hyundai vehicles with Japanese cars, listing them as “Korean” and “Japanese”. Today, all of the vehicles are labeled as “Asian” and Hyundai’s vehicles have started to win awards and gain recognition from car journalists and from the public. From the original Hyundai Accent, which offered value and reliability, to the Elantra and Santa Fe, people are beginning to realize that Hyundai vehicles represent tremendous value for the money.

Along with having a great product line, the auto dealership that sells them must be exceptional as well. Mississauga Hyundai fits that bill. According to Dukhilall, “Customers come first. You have to run a good dealership, build loyalty and offer good service and innovation. It’s having hands on management and owners.” Bhatia is often in the dealership, meeting customers – and the customers love it when Bhatia is there to personally greet them.

It’s not just about the car anymore; it’s the people who look after it that are so important to retain loyal customers. In that vein, Mississauga Hyundai has a number of innovations to keep customers coming back. They are one of the few dealerships that have their Service Department open on Sundays, from 11-3pm, for those customers who may work during regular business hours through the week. Along with that, there is a customer loyalty card and an automated car wash. These innovations may have been cost a lot of money but it keeps the customers happy and loyal to Bhatia and Mississauga Hyundai.