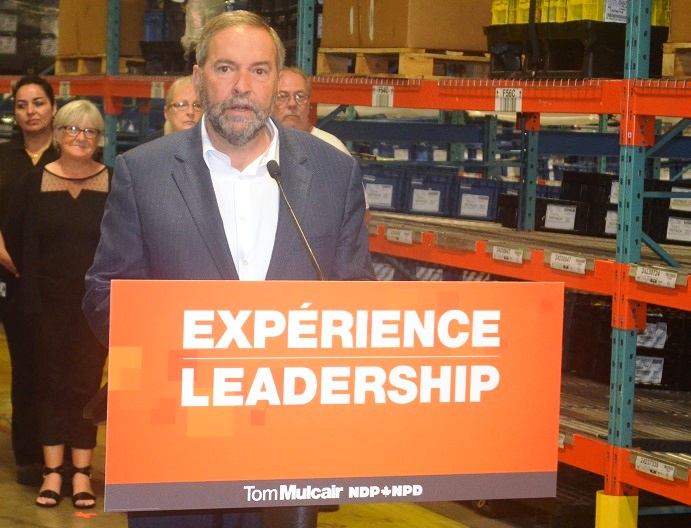 The 60-year-old Mulcair made the comments after touring Spencer ARL, a Niagara Falls auto parts firm, saying his government would vastly improve financial incentives for automakers that would bring back jobs throughout Canada. He went on to say that a federal NDP government would provide tax-free contributions to automakers from the Automotive Innovation Fund, which the party claims would save companies as much as $20 million a year.

Mulcair wasted little time in taking a direct shot at Prime Minister Stephen Harper and the performance of the Conservatives, saying a once healthy automotive trade surplus has quickly turned into a deficit.

“By 2014, our auto-trade deficit reached a whopping $19 billion, half of it with Mexico and after four years of Mr. Harper’s majority government, Canada has received a minuscule 0.2% of the nearly $82 billion of new assembly capacity worldwide,” Mulcair said. “In the meantime, China has walked away with nearly $50 billion in auto investments; Mexico with $9.3 billion; the United States with $7.7 billion and Brazil with $7.6 billion. “Clearly, Mr. Harper’s got his foot on the brake when we should be in the fast lane. We need to do better.”

While Mulcair was inside the factory unveiling his plans to reinvigorate the auto industry, Niagara Falls Liberal candidate Ron Planche sent out a press release to members of the media attending the morning event. The release criticizes Mulcair for saying “whatever is convenient.”

“On the one hand, he pretends to support local manufacturers, but it’s all a mirage,” said Planche. “The fact is the NDP will do real damage to the local economy.”

With Mulcair looking to secure votes in Niagara Falls, Conservative Leader Stephen Harper campaigned 20km to the west in nearby Welland, Ont., while Liberal Leader Justin Trudeau made a morning announcement in Toronto.

The latest Nanos election poll has Mulcair and the NDP leading the way with 33% support, followed closely by Trudeau and the Liberals at 30%, while Prime Minister Harper and the Conservatives are within striking distance at 27%. The remaining 10% are either leaning towards voting for the Green Party, Bloc Quebecois or remain undecided.