The origins of the Port of Nanaimo date back to 1961 and the Harbour Commission, established through an initiative by local politicians. It remained as the Harbour Commission until the Nanaimo Port Authority was created in 1998 by the Canada Marine Act (CMA) and it has been under a federal jurisdiction umbrella the entire time.

Located on Vancouver Island, the City of Nanaimo is about 28 nautical miles from Vancouver on the mainland of British Columbia and has a population of 95,000. According to the latest available statistics the Port provides about 3,200 direct jobs, along with 2,000 additional indirect jobs and 1,200 induced jobs.

More than 5.3 million metric tons of cargo was both imported and exported in 2018 in addition to 6.1 million passengers who ventured in and out of the port via air, ferry and other miscellaneous transportation methods.

The Canadian Business Journal recently spoke with Nanaimo Port Authority CEO Ian Marr about some of the current initiatives and future plans in what is a constantly growing global environment.

Given its geographic location on the Pacific Ocean it comes as no surprise that the majority of the shipping activities to and from the Port of Nanaimo involve Asia. Lumber is by far the leading export to Asian markets but there are an abundance of other products as well.

“Lumber is definitely the big export. Also, we don’t do it across our facility necessarily but pulp is big right here in the harbour,” says Marr. “We have a mill and they have their own dock facilities so pulp is definitely a big item going out.”

Regarding imports, kaolin, which is a clay mineral, is used in the manufacture of high-end papers with magazine-type quality, is a popular, heavily-shipped product.

“We’re also working on other break bulk cargos in the area and things like steel and project cargos for the larger projects that are going on in B.C.,” adds Marr.

In shipping, break bulk cargo – or general cargo – are goods that must be loaded individually and neither in intermodal containers, nor in bulk as with such products as oil or grain.

As with any business industry, modern facilities help to expedite the work process in an efficient manner, making it conducive for being as competitive as possible within a supply chain on a global scale.

“We’re constantly trying to keep our facilities up to par and upgrade whenever possible to make them as efficient as possible,” note Marr.

Modern and efficient infrastructure is vital as a means to maximize productivity at the port. Marr says the facilities are in good shape and there is excellent water depth, which makes for accessible shipping year round. Additionally, more time and effort is spent on the environmental aspect of the industry with each passing day and how it impacts on local communities.

“The impact on the environment is crucial when we look at how we carry out our operations,” confirms Marr. “We do our best to keep the supply chain moving for the country while balancing the needs of the environment.”

A great deal of talk and excitement over the past couple of years has focused on the new Vehicle Processing Centre at the Port of Nanaimo, which has just recently been finished and is now open for business. It is a clear sign the port is succeeding in diversifying its enterprise base with Nanaimo serving as a port of entry for Mercedes-Benz into the country. The centre is the only entry point in western Canada for these luxury European vehicles.

Until now the only option was for European vehicles to be loaded onto trains from the Atlantic Provinces and then transported via rail on a cross-country excursion to the west. Now, ocean liners navigate through the Panama Canal and head north up along the Pacific Coast to Nanaimo. From there the vehicles are taken by barge to Vancouver, while some will remain on the island to be sent to local car dealerships.

The multimillion dollar Vehicle Processing Centre project was a partnership between the Nanaimo Port Authority and Western Stevedoring and the Auto Division of SSA Marine to set up a 60,000 square foot facility near the waterfront to do final detailing on European automobiles prior to their delivery to B.C. The VPC will serve to alleviate transportation bottlenecks while making it much easier to deliver vehicles to the west coast. The project took about 22 months to complete from the start of initial negotiations to the arrival of the first auto.

“We got funding and got started in the fall of last year and got it done and ready for the first vehicle on March 11,” states Marr.

As the automobiles make their way through the Vehicle Processing Centre they are converted into Canadian vehicles with required stickers and any necessary adjustments to conform with Canadian regulations. The vehicles are then stored until the dealers reach out for them to be delivered.

“We concentrated strongly on that project and are very proud of it. Everybody worked very hard to make it happen. As the first auto carrier entered the Port of Nanaimo, we recognized that it was an historic event for our community,” says Marr. “This was a test of our protocols that will maintain the highest levels of safety for workers and the public.”

Once fully operational, the Vehicle Processing Centre will be able to handle up to 12,000 vehicles per year, expanding to a possible 40,000 annually by 2024.

As of this publication, the first shipment of vehicles had just arrived at the port weeks earlier. Marr believes this new addition could be the catalyst for many more great things to come.

“We’re now in negotiations with various people to try and bring other cargos through Nanaimo and we’re making some very good headway,” he says.

“Those kinds of accomplishments give you hope for the future and changing the business,” he continues. “What we try and do here is diversify to make sure we’re not reliant on any one type of cargo and we are making good progress in that respect.”

In addition to servicing the decades’-old traditional product markets and growing the VPC, Marr and the executive team at the Port of Nanaimo are also aiming at expanding the Duke Point facility over the next two-and-a-half years. The specifics of the project details are being worked upon at this time.

The Duke Point terminal is located south of Nanaimo in the Duke Point Industrial Park with a new barge service from Vancouver Island to Vancouver. There is excellent proximity to the Island Highway system with connections to the lower mainland and property for lease.

“We want to expand the facility both on land and at the dock face allowing for greater flexibility in operations,” says Marr. “Up until now, the Vehicle Processing Centre and the whole auto terminal layout has been our main focus.”

As excellent community supporters there are at least two times a year when the Port of Nanaimo reviews its contributions to various local events and organizations, whether it is dragon boat races or any number of summer tourism events.

“The gun-firing ceremony is a big event that we help to sponsor. The Marine Festival in July includes a number of fun events that culminates with the bathtub races,” mentions Marr.

A number of employees volunteer countless hours in carrying out the administrative tasks for numerous events taking place within the harbour. In addition to that, Marr is quick to point out that many staff members are very active and generous with giving their time to the community with various different social, athletic, entertainment and charitable organizations.

It’s a busy time at the Port of Nanaimo, with much more to come. There is a growing population on Vancouver Island and that too will create an ongoing need for increased servicing. Additional shipments will be directly linked with various other operations in and around Nanaimo, including logistics centres and likely coupled with relationships with the airport and rail lines on the island.

“I’d like to see our Duke Point facility expanded to where it’s fully operational and then in the next five years thinking about needing even more expansion,” concludes Marr. “Integrating the entire logistics chain is essential so that the manufacturers and operators can get their products to global markets in an efficient manner.” 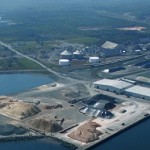