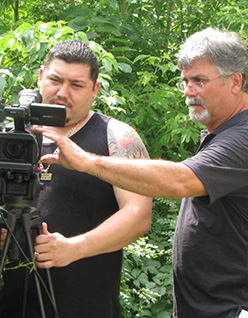 A national training school for writers, producers, and directors with aspirations to work in television, film, and digital media, the National Screen Institute – Canada (NSI), headquartered in Winnipeg, is a “school without walls”. They have delivered modern, comprehensive, and market-driven courses for the past 26 years.

Throughout its history, NSI has focused on storytelling. John Gill, CEO of NSI, told The Canadian Business Journal, “What we bring to the marketplace is a real understanding of the storytelling process and a fairly unique way of developing storytellers by honing their craft.

“Anyone coming to our organization has to have a love for storytelling, first and foremost. Not only do we provide training in how to tell a story and how to use the media effectively, but students will also make incredible connections within the industry.”

NSI’s strength is its close ties to the broadcasting and film industries and its key relationships with a variety of media experts and mentors who provide invaluable evaluation and knowledge.

“A writer new to the industry who comes in with a script that gets read by the top people in the business, that person is going to be remembered. You can’t put a value on that because it is a huge part of your long-term success in the industry,” Gill summarized.

Developing Stories for the Screen

Since 2003, NSI has developed and delivered programs for Aboriginal content creators, such as NSI New Voices, a 14-week introductory course that trains young Aboriginal adults for creative and challenging employment in television and film.

NSI is renowned for its involvement in content development. Its courses develop not only the creators, but their projects as well, whether it’s a script or a series proposal that is brought into the course.

A flagship course for the institute, NSI Totally Television has been most successful in developing writers and producers who create scripted television concepts that ultimately secure broadcast development deals, of which some are further developed and independently produced.

“Once it’s independently produced, we’re talking job creation, investment in production, and just huge impact beyond the scope of what you’d typically think of a project developed by a training organization,” Gill added.

“The link back to industry is very important to us,” Gill said. “The courses we are developing now are very market focused, because we succeed when our alumni succeed.”

And the National Screen Institute has plans to expand its digital media offering. The organization recognizes digital media as a significant, growing segment of the broadcasting and film industries and will design industry-driven courses to meet this demand, in addition to the digital training delivered through its existing courses.

“Digital is in the consciousness of everybody. More and more people want to create content for the digital platform,” Gill said. “If we’re serious about storytelling and media, we need to play a role in that space. We’ve bolstered the digital media and social media marketing aspects of our traditional courses.

We need to find the best and the brightest that Canada has to offer, and give them the tools to create in that environment. Digital is a very big part of our future.”

Currently in development, NSI will offer a web series training course about content creation and the technical development of storytelling skills. Students will work to develop a web series, with the possibility of producing at least one episode. The web series course will offer transferable skills similar to other programming offered by NSI.

A not-for-profit, charitable organization, NSI is supported by the Province of Manitoba, Telefilm Canada, the City of Winnipeg, and a who’s who of industry partners. Following a major funding cut in 2008, the organization reengineered its courses to better connect with and reflect industry needs. Looking more toward the industry for its funding, NSI is making an effort to better tell its story.

“This organization has a phenomenal track record of success but didn’t brag about it, which became a detriment,” Gill explained. “We spent a lot of time talking about what we need to say to people about our organization. Doowah Design came up with a slogan for us – ‘Dammit we’re good … and you can be too’ – and in a meaningful way it captures the sentiment we want to convey.”

Moving forward, the approach is to add to this host of successful, relevant courses. NSI wants to develop additional, forward-thinking programming opportunities. Gill summarized, “The need for us to maintain the quality of courses, training, and development all has to be part of it. We don’t want to lose sight of our mandate and we clearly want more people to come through our doors and receive our training.

“This organization really punches way beyond its weight class. We have such a great story to tell, and it’s not just about training, it’s also about acceleration and incubation of serious, meaningful Canadian content.”