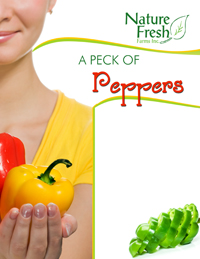 A Peck of Peppers

Leamington, Ontario is located in what is known as the sun parlour of Canada, a district in south-western part of the province that is one of the most agriculturally productive in the country. Nestled in Leamington is Nature Fresh Farms where red, orange, and yellow bell peppers are grown on its 67-acre, state-of-the-art greenhouse complex. Using both glass and poly greenhouses, Nature Fresh is the largest bell pepper greenhouse in North America, growing over 7 million kilograms of quality produce each year that is shipped across Canada and the United States. The peppers are completely natural with no genetic tampering or pesticide use, and because they are grown in a controlled environment, they are even safer than organic produce.

Nature Fresh Farms started in 2000, with over 18 acres of poly greenhouse devoted to peppers. As a manufacturer of turn-key greenhouse systems, Peter Quiring, President and CEO, says he started Nature Fresh Farms to showcase the best greenhouse technology, which he was having trouble selling at the time. “I figured I could hire a grower and prove the technology had an excellent payback,” he says. “I was going to sell it later. I ended up falling in love with the business and the next year, I doubled the size. And I’ve been with it ever since.”

His plan worked on two fronts. Quiring has been selling more high-tech greenhouse systems and Nature Fresh Farms has become one of the largest privately-owned greenhouses in Canada. After the first expansion to 36 acres in 2001, the farm continued in its success and experienced more growth in 2005, when Nature Fresh added 31 acres of glass greenhouses. Right now, all 67 acres are used for peppers but the farm is considering vine tomatoes when it expands to another 31 acres, which is underway now.

The Evolution of the Greenhouse
Greenhouses date back to the first century when cucumbers were grown year-round for Roman Emperors. Back then, plants were pulled from the ground and stored on carts that were kept inside overnight. Since those days, greenhouses have evolved to become entire ecosystems within themselves. Now growers have control over temperature, humidity and growing medium, resulting in higher yields that use five per cent of the water that would normally be required to grow the same amount of produce on a traditional farm. Moreover, water that is not initially absorbed by the plants is sterilized and re-circulated through the greenhouse, eliminating the problem of waste water.

“Greenhouse technology has come eons from where it was even 20 years ago,” says Quiring. “People were growing food in the ground two decades ago. Now, we grow produce on what are called grow gutters. We use shredded coconut husk that we can recycle and put into potted plants or mix with fertilizers. Also, it used to be that access fertilizer water was dumped on the ground, which ended up in the water stream. Now, we recycle 100 per cent of the access drain water. No fertilizer water goes into the streams at all. There are huge changes.”

Drawing on the experience and extensive research coming out of the European greenhouse community, Quiring used the most advanced technology when he built the glass range in 2005. Nature Fresh Farms’ glass greenhouses offer the ultimate high-tech growing environment for produce, providing extensive control. Equipped with a roof washer and sprinklers for the roof and side walls, they obtain optimum amounts of natural sunlight for photosynthesis to take place. Roof and sidewall screening material helps with heat retention during the winter months while reducing the intensity of the sun’s rays during the summer months, and grow pipe moves along with plant growth to create a micro-climate around the head of the plant.

It doesn’t stop there. Nature Fresh continues the innovation process with their own testing facility. Occupying 1,200 square metres, this experimental range provides a place to test new growing methods and technology with isolated climate control and irrigation systems. Also experimenting with different pepper varietals, they grow between 80 and 100 different trials each year, searching for fruit with improved quality, size, and sweetness. Committed to efficient growing methods and premium taste, Nature Fresh is never satisfied in the search to provide the highest quality.

Long harvest
Of course, growing produce in a greenhouse allows for a longer life cycle. So it’s no surprise, then, that Nature Fresh begins its growing season at the end of December and harvests from March until the end of November. By mid-November, the peppers will have grown to a height of 4.5 metres and crop clean-out begins—recycling the coco material, composting old vines, removing all old plant material and sterilizing the entire greenhouse for a new crop.
When it comes time to process 67 acres worth of peppers, Nature Fresh Farms uses an automated packing line to reduce wait times and ensure that fresh peppers leave the facility in the shortest time possible. The packing line is able to pack and ship over 1,700 boxes per hour at the height of picking season.
It works like this. Peppers arrive at the dumping station and are weighed, before being emptied onto a conveyor system. Then the peppers are organized and sorted at a series of weigh stations, where each ripe pepper is individually labelled with farm information for easy traceability. The produce is put into a box that is automatically stacked, palletized and labelled with the date, bar code, size, colour, and farm address. Finally, the peppers are transferred to the 7,500 square-foot cooler until shipped.

Food Safety
Nature Fresh Farms do their due diligence to ensure their peppers are safe and high-quality products. “We were food safety-registered even before it was mandatory,” says Quiring. “It was very important to us.” Besides being registered under HACCP, the food safety agency, Nature Fresh Farms handles quality control through automation in greenhouse activities for consistency and accuracy. Priva Climate Control and Priva Assist give Nature Fresh Farms the greatest control over all aspects of the growing procedure. Priva’s programs allow for the close monitoring of temperature, humidity, CO2 input, irrigation, plant maintenance, harvesting, and product packaging. They also automate irrigation units for precise supply of water and nutrients to individual plants. Water samples are sent to qualified labs, ensuring that the proper nutrient levels are attained and that no contaminants are present.

In the unlikely event of contamination, Nature Fresh has an accurate method of tracking their peppers once they get to market. Not only does the box have all the necessary information, but each pepper is also labelled with a barcode, farm code and the marketer name. “If someone had a question about the produce, we have the ability to tell you who picked it and where,” explains Quiring. Ensuring that they can trace any inquiries back to an entire section of the greenhouse, Nature Fresh Farms maintain accountability and transparency in everything they ship.

Another method of preserving the integrity of their produce is to use biologicals to address pest problems within the greenhouse. A bio-control team monitors bug populations and avoids the use of pesticides through an Integrated Pest Management (IPM) program. IPM is an approach that uses natural predators to control the population of undesirable pests. “Essentially, we’re using ‘good bugs’ to prey on the ‘bad bugs’,” says Quiring, “so we’re able to successfully manage pest problems in the greenhouse.”

Targeting lower emissions
One of the external influences that affect the greenhouse growing industry is the unstable energy market; heating a greenhouse requires a lot of energy.  Nature Fresh uses biomass boilers and natural gas, and their primary source of fuel is recycled wood from old homes and buildings. The demolition wood helps to fulfil heating requirements, and in combination with the extensive use of CO2 in greenhouse operations, the farm is able to meet low-emission targets.
Quiring is always trying to find more ways to save energy. “At the moment, I am involved with Remasco, which is the Renewable Energy Management and Services Company,” he says. “They have a 20-year contract in place for a stable fuel supply at a stable price.”

Remasco is in the process of developing a gasification system that will use fuel pellets derived from a blend of municipal solid waste and manufacturing residues. The pellets burn extremely well and clean, yielding about 11,000 BTUs per pound—a near equivalent to coal.

“We want to get into burning the energy to produce high-pressure steam which makes electricity,” says Quiring. We can take the residual heat from the steam turbines to heat the greenhouse. We’ll be in the growing business and the electricity production business. It’s the most efficient means of using a biomass fuel. We’re excited for what’s to  come.”

Did you know?
•    All bell peppers begin green and turn yellow, orange, and red as they ripen and gain in sweetness. Once ripened, different coloured peppers have different tastes and identifying features.
•    Yellow peppers are known as the juiciest while orange peppers have been allowed to ripen longer, giving them a milder taste. Red peppers are typically recognized for their sweetness.
•    Peppers are a botanical fruit, but widely viewed and treated as a vegetable in the culinary world. More likely to be found on a veggie tray than in a fruit salad, sweet bell peppers, like cucumbers and tomatoes, can accurately be called a fruit or a vegetable, depending on the context.
•    Peppers that are picked earlier to ripen afterwards are not as sweet as their vine-ripened counterparts.

Nutritional Facts
Dark or vibrantly coloured vegetables are typically known for their high nutritional properties, and sweet bell peppers are no exception to this rule. High in Vitamin A, Vitamin B6, Vitamin C, beta-carotene and dietary fibre, they are low in sodium and contain no cholesterol. Additionally, Vitamin C is an anti-oxidant, and the high levels of both Vitamin C and beta-carotene in peppers may be effective in preventing cardiovascular disease and some cancers. http://www.naturefresh.ca/nutritionfacts.pdf

Affected by their ripeness (colour) and the method in which they are prepared, the Vitamin C content in bell peppers varies dramatically. Ranging upwards from 75% to nearly 300% more Vitamin C than in citrus fruits by weight, yellow, orange, and especially red peppers contain significantly more Vitamin C than green peppers. Additionally, boiling peppers yields even more of the powerful anti-oxidant.

Consumer Tips
Tips for selecting sweet bell peppers:
Choose peppers with vibrant colour in both the body and the stem.
Skin should be smooth and tight.
Stems should be green and fresh looking.
Peppers should be firm and heavy for their size.
Seeds should not rattle inside the pepper.
The shape and size of the pepper do not affect quality, but some sizes may be preferable for certain recipes or uses.

Storage information:
Use perforated bags to store unwashed peppers in the vegetable compartment of the refrigerator.
Peppers should last up to one week.
Peppers can be frozen two different ways:
Slice or chop finely, then freeze. Use within 6 months.
Blanch (boil) for 5 minutes, drain, and then freeze. Use within 1 year.
De-seed before freezing. This is much easier and faster when peppers are fresh 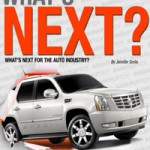 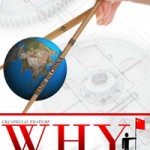