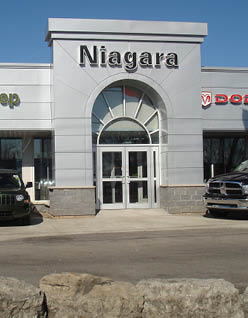 At Niagara Chrysler Dodge Jeep, strong family values are the key to success. The Niagara Falls, Ontario, dealership is built on a long history of automotive involvement. As President and General Manager Dan Page explains, Niagara Chrysler will continue to be a family-run business well into the future.

Automotive Sales seems to run in the blood of the Page Family. Each successive generation adopts the same love of cars as their predecessors. This long-standing love of the industry is what has pushed Niagara Chrysler forward as a prominent Canadian business.

Dan Page is a third-generation automotive sales professional. His grandfather, Bud Lauria, ran a Chrysler dealership in Concord, Ontario, for many years throughout the 1940s, 50s, and 60s. After Lauria’s passing in 1964, the dealership’s assets were bought by a man named Don Sorenson. This transaction, seemingly coincidental at the time, would eventually play an important role in guiding the Page family’s future.

In the late 1960s, Sorenson decided to relocate the dealership to Agincourt, Ontario. Dan Page’s father, Gord, joined Sorenson Chrysler in the early 1970s. He worked at the dealership for over seven years as a career car salesman. In 1975, he brought 15-year-old Dan Page into the business. Page began as a lot boy, cleaning and priming the display vehicles. Three years later, Page was promoted to salesman. Through hard work, dedication, and a love for the product, Page quickly moved into a management position.

In 1977, Sorenson’s son, David, took over the dealership. In 1983, he relocated the business to Richmond Hill, Ontario. Two years later, Dan was awarded the position of Junior Partner. At only 26 years old, Dan Page was one of the youngest dealer principals in Canadian history. The dealership was subsequently rebranded as Sorenson-Page Chrysler Dodge Jeep in the early 1990s.

Sorenson-Page Chrysler experienced tremendous success throughout the following 22 years. Page proved that practiced skills and a customer-oriented approach were integral to operating a successful dealership. In 1992, his expertise was featured in an article published in the Liberal, a community newspaper based in Richmond Hill. Chrysler Canada continually ranked Sorenson-Page Chrysler Dodge Jeep as one of the top dealerships in both sales and service.

Page’s wife, Julie, also grew involved with the dealership over the years. She took on the role of Customer Satisfaction Manager, and assisted with all administration work. When Page’s children, Krystal and Andrew, were young, Julie would perform follow-up quality service calls with customers from the family home.

In the early 2000s, Page took on 100 percent of the dealership’s shares. Page decided to sell the business in 2007, and purchased a property in Niagara Falls.

In 2007, Niagara Chrysler Dodge Jeep was born! Although there were some struggles during the economic collapse of the late 2000s, Page never gave up on his dream. At times, there were as few as three new cars in stock, and Page was forced to turn to putting up personal assets as collateral. Yet Niagara Chrysler pushed through and now stands as highly successful Ontario Chrysler dealership.

Much of the dealership’s recent success can be accredited to the Niagara Chrysler teams unwavering commitment to providing the very best customer service, despite sometimes unclear economic outcomes. According to Page, the staff are, “the ones on the front lines, dealing with customers and constantly retraining themselves to do their jobs even better.” It is due to the team’s dedication to Niagara Chrysler that has pulled the business through both difficult and profitable times.

“We’ve been at this location eight years, and we’ve always experienced annual growth,” Page tells CBJ, “We’ve sold over 3500 new and used vehicles, and that number continues to grow each day.”

Page’s children now continue their family’s legacy. His daughter, Krystal (29), worked for several years in administration at Sorenson-Page Chrysler Dodge Jeep before pursuing a career in automotive financing at TD Bank as an Dealer Relationship Manager. His son, Andrew (27), spent several years contributing to the dealership’s success in the sales department while completing his diploma in automotive marketing at Georgian College. He now acts as the General Sales Manager at Niagara Chrysler. Page expects his son to join as a partner in the near future.

“Our used car to new car sales ratio is 1:1 – significantly above industry standards. I give most of the credit for that to my son and his tremendous work here,” explains Page.
“We have been and always will be a family-run business. If you ever have a question, there’s almost always someone from the Page family here to assist you. We want to make a personal connection with each customer that walks through our doors. They know that we have a vested interest in this company’s success, and will go above-and-beyond to meet their needs.”

Niagara Chrysler Dodge Jeep plays an active role in the local community. The dealership is a current member of the Chamber of Commerce, and regularly participates in many charity events. This important part of the dealership’s operations will remain intact as Page transitions into retirement and Andrew takes control of the business.