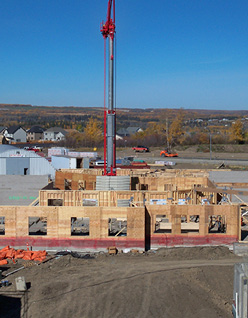 Additionally, adjacent to the hospital is the new residential care centre, measuring 7,500 square metres and housing 124 beds, while its neighbouring location to the Fort St. John Hospital allows for expanded care opportunities.

Valued at an estimated $300 million, the Fort St. John Hospital Project was funded through a public private partnership (PPP) between Northern Health Authority and private partner ISL Health. The innovation and strength behind ISL Health has played an integral role in the delivery of Fort St. John’s state-of-the-art healthcare facility.

“One of our goals was to work within our budget and timeframe” Betty Morris, COO of Northern Health, told The Canadian Business Journal. “We knew what we had to spend and we worked really closely with our design-build joint venture. We have delivered a building that is on budget and on time. That was always the goal and we have done that.”

What’s unique about the Fort St. John Hospital Project is its emphasis on flexibility. The building is modifiable in that it allows for potential future expansion to accommodate the local community and industry. Projections show that the local community will expand by 21 per cent by 2028, to about 84,000 citizens, not to mention its aging population. This level of flexibility allows Northern Health to contemplate potential expansions to its emergency department and birthing centres. The Fort St. John Hospital provides new and expanded services not available in its former facility.

“We needed a flexible building to lead us into this future,” Morris summarized. “Another guiding principle was that we would have a quiet hospital. For us that means different ways of communicating with each other. We also participated with designers to incorporate natural light to its fullest extent.

“We also wanted to create a facility that had intuitive way-finding, meaning that as you came into the hospital from one of the four entrances, you would be able to find your way quite easily and it would be apparent. We’ve paid a lot of attention to protection of privacy, and in doing that we incorporated some hallways that only staff and patients will travel in that are not open to public. We’ve created an environment that is friendly and conducive to easy access.”

The Fort St. John Hospital Project is the first replacement project of its size in Northern British Columbia, representing the provincial government’s commitment to a revitalized healthcare network, particularly across the northern and rural populations of British Columbia.

“Northern Health is a huge health authority. We are the upper two-thirds of British Columbia, delivering services for its vast geography,” Morris stated.

The Northern Health website summarized, “This project is an important investment for future generations in Fort St. John and the surrounding communities in the delivery of quality and sustainable healthcare services.

“The Peace River Regional District was also behind this project, and the regional district came up with 40 per cent of the capital. This was a facility that was needed in Northern British Columbia.”