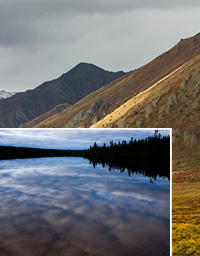 There is something about the air in the Western Arctic; rarefied, atavistic – as if breathing it for any length of time unburdens one of self importance and distils in you a visceral, elemental sense of the place.  The smell; raw, pure and like nowhere else I’ve been. Like the stark beauty of the land itself, rubbed raw of the human condition, the scent of the place is forever trapped in the meniscus of my memory.

Similarly, the people that call this place home have left an indelible mark on my psyche too.

The Mackenzie Delta Region of NWT, part of Canada’s largest river system and second largest arctic delta in the world, is a vast and primal labyrinth of channels, lakes, and low lying alluvial islands, covered by stunted black spruce, becoming sparse and thinning as the river mingles with the Arctic Ocean near Tuktoyaktuk. It holds an enormous energy reserve—a resource estimated at more 15.4 Tcf (trillion cubic feet) of natural gas in the onshore and shallow water areas of the Delta—a tract of 2.2 million hectares (5.5 million acres) about the size of the state of New Hampshire.  The already developed and proven finds include more than 250 million barrels of oil and 11 trillion Tcf of natural gas and condensate. To give these numbers some perspective, the average Canadian home consumes less than 100,000 cubic feet of natural gas annually.  It’s a staggering number.  And an equally incredible number is the expected infrastructure costs to fully capitalize and bring to market one of the largest and undeveloped resources of its kind on the planet – $16.2 billion CAN.

When Justice Thomas Berger first tabled his infamous report back on June 9th 1977 examining the impact of the proposed Mackenzie Valley Pipeline Project (MVPP), it was billed then as “the biggest project in the history of free enterprise.”1  During the 30 plus years of negotiations, Canada has made historic strides forward in the settlement of native land claims; first with the Inuvialuit Land Settlement Act of (ILS) 1984, followed by the Gwich’in Comprehensive Land Claim Agreement (GCLCA) in 1992.  And again in 1994 with the Sahtu Dene and Metis Comprehensive Land Claim Agreement.  To date, only the Dehcho First Nations has yet to sign, and their 34 per cent interest “will be held for them if and when they choose to participate.”

In March 2011, the Harper government gave the federal green light to begin the construction of the project.  But in July, Shell Canada pulled up stakes and is looking to sell its 100 per cent ownership of the Niglintgak field, which alone holds and estimated 800 bcf (billion cubic feet).  Hot on the heels of Shell’s decision, KOSGAS—Korea Gas Corp., the state owned and the globe’s largest importer of LNG (liquefied natural gas) has expressed interest and is rumored to have made an offer on Niglintgak, and an outright purchase of Shell’s 11 per cent interest in the overall project.

For now, the train is still on the track.  Harper is at the throttle and in early 2012 we should hopefully see the start-up dates announced for the 1220 km (758 mile) mega-pipeline.

But this piece is not about numbers.  Rather; it’s about the people, kinship, and community.  It’s really about a promise of the future—a future that will forever reshape the North.  And it’s a personal reflection on character—stalwart, bold, of resolute and unyielding tenacity—of those who I still call my friends today.
People like O.D. Hansen, a principle with the Aboriginal Pipeline Group (APG) and with whom I shared some office space back in the day.  Together we helped developed the management protocols for Ikhil discovery and the ensuing Inuvik Gas Project.

And O.D.’s brother Frank; a Professional Engineer and President of Kavik-AXYS Inc.  A successful entrepreneur in his own right and equally know around the Delta for his business acumen as for the retrofit 512 (16’x32’ cabin – typical of the first houses built during the ‘50’s when the notion for the town of Inuvik was know as “East-3”) strapped to his river barge, in which he plies the waters around town. If you’re lucky, his wife Sandy can serve up an onboard and mean Caribou stew.

Like Kurt Wainman owner of Northwind Industries and general contractor—a flinty, unvarnished aficionado of anything with fuel injection.  He travels in the same circles with the likes of Jesse James, host of TLC’s ‘Monster Garage’—former husband of actress Sandra Bullock.  Father, family man and of late, Kurt was part of the History Channel’s out-of the-park success story—‘Ice Road Truckers.’

And for Fred Carmichael, who I meet briefly during my tenure in the North, but have since garnered an even greater respect, as the planning of this issue gathered a head of steam and our piece on APG, the Company he chairs gained purchase.  He is a true icon of the North.

The real story of the MVPP is one of fealty; of community and respect for the land and of those who came before.  Of a People who understand, without question, that the needs of the individual are ephemeral at best.  The truth of the story will be told by the children, who will remember best, not just achievements that can be counted, but of the shaping of their path forward.

So, this is for the Hansen brothers and their extended clan; two from a family of thirteen, born on the land in a blink of a generation not far past.  This is a word too, for Kurt and his young family, for the Wainman girls.  And finally for Fred, who offered his thanks to me for what The Canadian Business Journal is doing for “our people”.

John Medeiros spent a year in the Mackenzie Delta and directs the  Energy – Oil & Gas Market for the IRJ / CBJ.