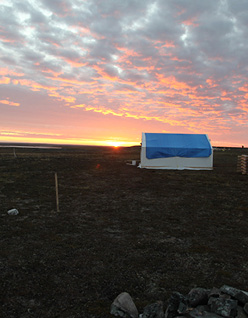 When geologist Jon North made his second, then third visit to an area just 60 kilometres from Rankin Inlet, Nunavut, and, significantly, 80 kilometres from the renowned gold producing site at Meliadine Project (5 million ounces at a grade of 7.4 gold per tonne), optimism for the Pistol Bay Gold Project really picked up.

North is the President of exploration company Northquest Ltd., which explores for gold and other metals in Canada, Mali, and other jurisdictions. North has built a reputation for using his extensive background in geological surveillance to decrease as much geological risk as much as possible, using a strategy exploration in permissive rocks and in jurisdictions and geologic terranes which have not achieved exploration maturity.

With 25 years’ experience, North is a professional exploration geologist whose primary field of expertise is in area selection and the application of the most appropriate methods of exploration in the early stages of project evaluation. In addition to his position as Director and CEO of Northquest Ltd., North is a Director of the Board of New Dawn Mining Corp. (ND – TSX) and a Director of the Board of Bridgeport Ventures Inc. (BPV – TSXV).

“Jon has been a geologist his entire professional life and his passion for it is evident,” says Investor Relations Manager Tanya Mahadeo. “He is also very good at what he does; he has been successful because he puts all the research in. He does nothing blindly.”

The Pistol Bay Project consists of 1,100 square kilometres of mineral rights. The property is located approximately 60 kilometres south of Rankin Inlet and 80 kilometres south of the Meliadine Project of Agnico Eagle Mines (5 million ounces at a grade of 7.4 grams gold per tonne). The Meliadine Project of Agnico Eagle Mines consists of several gold deposits within a segment of banded iron formation which has gold occurrences, prospects, and deposits over a strike length of at least  seven kilometres.

“In 2010, the Company completed due diligence sampling leading to the acquisition of the Pistol Bay project in Nunavut, Canada,” says Jon North in a statement. “The Pistol Bay project is an exact fit for the Company’s exploration strategy in that the geology is extremely permissive for gold deposits, there are numerous gold occurrences in the area, Nunavut is a jurisdiction that has not achieved exploration maturity, and a large land package could be readily acquired. Since December 2010, the company has completed three claim staking campaigns and completed the first airborne geophysical survey ever flown in the area.”

The Pistol Bay Gold Project is on property in Nunavut and it is a greenstone belt which has produced  350,000 ounces of gold since 2010, which is about the same size as Abitibi gold belt in Ontario and Quebec which has produced 150 million ounces since 1909.

“The area is very undermined, which is a good thing,” says Mahadeo.

The day we spoke with Mahadeo, the Pistol Bay camp was being closed until next summer, after a very successful exploration period and the completion of the first phase of drilling. The assays are currently in the laboratory for analysis.