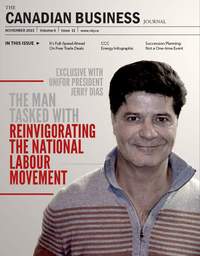 Heated debate about globalization vs. protectionism rages on regarding what ultimately produces the best return for Canada. Much has changed over the years and the pendulum has definitely swung in favour of globalization. Canada recently signed two more free trade agreements, the largest of which was with the European Union. On a smaller scale, we’ve increased our agreement with Chile into the financial services sector in addition to the pre-existing resources sector. But for manufacturing to grow, it’s widely believed unions will need to regain the cache they once held in the 1970s and 1980s. But is that realistic? Jerry Dias, the newly elected president of the recently created super-union. Unifor is convinced it can and will happen. CBJ sat down with Dias to get his take on what the labour movement needs to do in order to regain the successes of its glorious past.

No matter the month it seems the topics of BlackBerry and the ongoing saga of the dysfunctional U.S. Congress are constantly running front and centre in the news. While we all hope the former somehow manages to pull itself out of the fire against seemingly insurmountable odds, the latter has an ability to directly impact not only s our friends to the south, but also our economic well being. It’s no secret that Democrats and Republicans despise one another’s politics. But even greater than their political hatred is the love they have for the good old US of A – and for that fundamental reason alone, it’s almost impossible to imagine they’d ever reach the point of defaulting on government payments, which would ruin their credit rating almost instantaneously. Why then do they need to puff out their chests in such a high-stakes game of chicken? By the way, the arguing starts all over again early next year when the bridge funding expires.

Also in this edition we have the launch of a new ongoing series by Tom Rand of the MaRS Discovery District. Amongst other things, the notfor- profit organization looks to commercialize publicly funded medical research and other technologies through the assistance of private enterprise and as such is recognized a public-private partnership. Social responsibility is at the core of their efforts and we are certain you will find Tom’s columns both informative and thought provoking as much of the business world and leaders such as Tom look to evolve commercial enterprise towards cleaner technologies.

As always, we highlight some of this country’s most successful and innovative enterprises with our corporate business profiles. It’s those small, medium and large, that give Canada such an excellent reputation internationally. 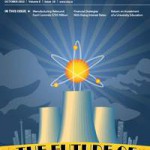 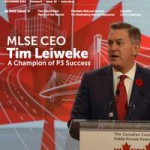