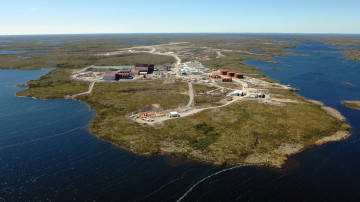 CBJ — Without warning, DeBeers Canada has abruptly closed its Snap Lake diamond mine in Northwest Territories putting more than 430 employees out of work.

In a release to the media the company says the mine is ceasing operations immediately.  Closing the mine will require 190 employees, while the care and maintenance phase will require another 60 to 70 workers, but they too will be out of work once that phase is completed.  About 40 lucky workers will be transferred to the De Beers’ Gahcho Kue project, a diamond mine near the N.W.T.’s Kennady Lake, which is slated to open in 2016. The company says another 60 employees could be transferred to that project next year, depending on market conditions.

“The decision follows a review of the mine’s operation, particularly in light of current market conditions,” the release says.

The large downturn in diamond prices and a costly water problem that required a licence amendment located 220km northeast of Yellowknife.

The Snap Lake mine opened in 2008 and employed about 700 people and was the nation’s only fully underground diamond mine.

Carando Partners With Fazoli’s and Feed the Children to Honor Military Families in St. Louis