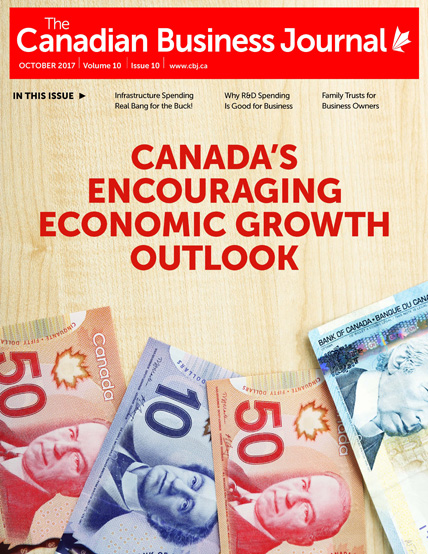 The OECD and the IMF have painted rosy pictures for Canada’s economic outlook as we close out 2017 and head into 2018. In fact, both international organizations predict this country’s growth will be the most substantial of the G7 countries. There are many reasons for optimism, including a stable employment base, the rebound of oil and gas, at least to an acceptable level, and a dollar that is vibrant on the internal stage and yet not so daunting that it will hamper exporting initiatives. It’s our cover story this month.

Shares of BlackBerry spiked 13% after the Waterloo-based tech company reported an unexpected profit in its latest quarter. After initially being a leader in the smartphone market, BlackBerry has made a shift to software and services over the past few years. Software and services revenue hit $185 million in the quarter, a record for BlackBerry. CEO John Chen says the company’s non-GAAP operating margin was the highest in more than five years. There is no denying Chen has been instrumental in not only saving BlackBerry from potential disaster, but in turning into a brand new prosperous direction. It’s always great to see a Canadian company perform so well, and on an international level.

NAFTA and the renegotiation process have been ongoing for some time now, and it appears that a new agreement is still some time away. It appears the United States is far more concerned with the trade deal with Mexico as opposed to Canada, but if it’s going to be a trilateral agreement, it’s going to have to yield the same benefits for all three. Truth be told, Canada’s leverage with the U.S. will be somewhat limited in the renegotiation process, while Mexico’s may be close to non-existent. It’s not hard to believe that U.S. policymakers may not want a free trade deal at all. If there is a NAFTA 2.0, U.S. trade representative Robert Lighthizer must give Congress 90 days’ notice before it gets signed by President Donald Trump. The International Trade Commission would then start analyzing the impact of the new agreement and that alone could take about six months. Then Congress needs to approve it — another major hurdle. This is going to be a while before it all gets revolved.

The federal government has spent more than $110,000 fighting a First Nations girl in court to block payment for orthodontic treatment that cost $6,000. How on earth is that money well spent? Of course the argument from the government’s perspective might be that it’s a one-time precedent-setting matter, but good gosh, that type of spending is beyond ridiculous.

Did you know?… If Bill Gates were a country he’d be the 37th richest out of the 195 in the world. He has an estimated fortune of about $100 billion CDN – give or take a couple billion.