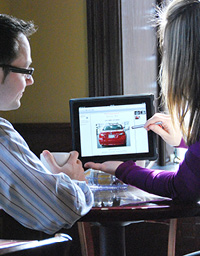 One-Eighty Corp. has set out to improve both the car buying and car selling experience.

Founded in 2000, One-Eighty Corp. streamlines the sales process of automotive dealerships, enabling dealers to maximize profitability through use of its software, offering guided sales and business operating processes as well as customer and prospect relationship management.

Kerry Mueller, President of One-Eighty Corp., spoke with The Canadian Business Journal, emphasizing the core values of One-Eighty Corp. and illustrating how the company is driven to create a better reputation for the car business by helping forward thinking, consumer friendly dealerships to outperform their competition.

The need for full disclosure

In its most basic form, One-Eighty Corp. provides software to help dealerships sell cars, while providing a customer a full disclosure sales process, different from the norm. Through this method, One-Eighty has delivered more than $20 billion in vehicles since its founding.

“A lot of people have gone into a car dealership and have not been very happy, not understanding their choices, so we’re out to change that,” Mueller stated.

“We want to make it easy for consumers to buy from our dealers. When you go into a One-Eighty dealership, you’re walked through the sales process, seeing your options and your choices. It’s complex but it’s laid out step by step and you’re part of it. The consumer feels relaxed, engaged, understands the process and is comfortable to make a decision.”

One-Eighty Corp. represents dealers from 34 different brands across Canada today, including a high level of penetration in the luxury car market brands, such as BMW, Mercedes-Benz, Porsche, Volkswagen, Audi, etc. One-Eighty Corp. strongly believes in its full disclosure system, knowing the system works, the customer appreciates it, and the dealership as a whole is better off for it.

Built as an integration hub, One-Eighty Corp. offers software as a service with the intent to be best in class across all facets of its operation, focusing on sales and the customer relationship management process, as well as integrating with the best in class of other entities, because, as Mueller succinctly stated, no one system can do it all.

“We seek integration partners who want to work as a team to make information flow the best way possible for our common customer and dealership owner,” Mueller said. “We also integrate with manufacturers to make it as easy as possible to seamlessly transfer data that needs to travel between systems to make sales happen.

“We’re out to remove the keystrokes from this process and automate it as much as possible.”

The market niche of One-Eighty Corp.

“The reason we exist is because there was a real void in the market for a great sales system so we set out to change that,” Mueller stated.

At One-Eighty Corp., customer relationship management is taken it to the next level. Because the entire sales process is handled in one system, the dealership can easily and intelligently communicate relevant information to its prospects and customers. Most impressive is that the entire process is completed through cloud computing, a computerized resources accessible via a network, enabling One-Eighty Corp. to offer software as a service, well before such technology was an industry mainstream.

“We’re pioneers in this regard, offering a centralized system delivered over the Internet, innovating new functionality faster than our competition, delivering it faster, and supporting it more easily, so we’re very agile and that has set us apart,” Mueller said. “We’ve stayed at the front, delivering new, innovative technology that everyone enjoys.”

Another technological advancement of One-Eighty Corp. is its ability to go mobile, aiding its customers in a mobile fashion. Mueller added, “We can do business anywhere. A lot of our dealers have picked this up, making access even easier through the innovations for mobile devices—iPads, iPhones, BlackBerrys, Google Android—the customer does not necessarily have to go to where the sales rep is, so that takes the car deal where it is convenient to happen. It allows people to stand up and look at things while still putting together the [car] deal.”

One-Eighty’s dealer management tools helps managers and owners “stay on top of business”, through many aspects of a car dealership, from vehicle sales, to after-market sales to performance metrics. “It’s very dynamic, and our dealership owners like to know how their business did that day, by the end of the day, rather than when financial statements come out and it’s an autopsy. We encourage our dealers to manage in real time.”

Driving toward the future

As innovators, One-Eighty Corp. never stops thinking about what is next, focused on the future and on expanding through other brands, but also looking to continue growing its verticals, facilitating groups in more efficient ways, for even greater integration.

It has been a theme of growth at One-Eighty Corp., such that the company was able to grow through the recession.

“The downturn in the economy created a squeeze that hadn’t been experienced in Canada for quite some time, and it pointed out to dealers that you really have to do well in sales to survive,” Mueller said. “If you don’t do well in sales, you don’t make it, and I think that when combined with the demand from consumers to have a much friendlier, full disclosure sales process, it is something dealerships are beginning to focus on to survive and do excellently in the years ahead. We grew through the recession, seeing double digit growth.

“We’re listening to what the industry needs and delivering what we believe will relieve that pain point and give our dealers that advantage,” Mueller summarized. “We focus heavily on support, setting out to be untouchable so we quickly help our dealers when they need it.  That way they can get on with their business while we can get on with delivering something new, fresh, innovative, and making it roll forward very quickly.”