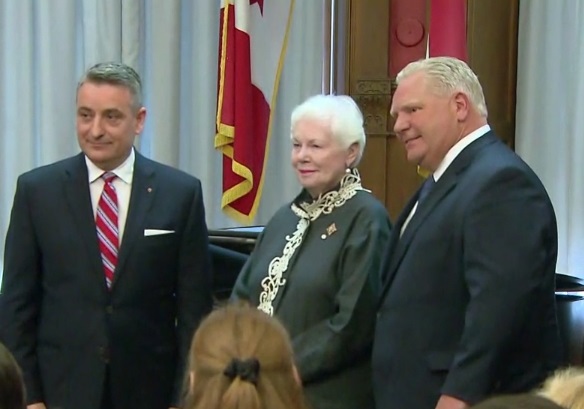 CBJ – Doug Ford’s Ontario Cabinet has undergone a major overhaul and the biggest move is the removal of Vic Fedeli as Minister of Finance.  The pointed demotion seems to place a significant portion of blame on the former minister following intense public criticism for his budget.

Fedeli moves on to become Minister of Economic Development, Job Creation and Trade and Chair of Cabinet. There had been reports Fedeli would not remain a minister following this morning’s shuffle but he has in fact accepted a lesser role. Rod Phillips is now in the economic hot seat, moving from Environment to become Minister of Finance.

Christine Elliott remains on as Minister of Health and Deputy Premier.

Among some of the other more prominent portfolio changes:

The new Minister of Infrastructure is Laurie Scott. It had been Monte McNaughton. He now takes over as Minister of Labour, which is viewed as somewhat of a lateral move. It will involve dealing with many delicate stakeholder relationships.

Minister Tourism, Culture and Sport is now Lisa McLeod. MacLeod had taken a lot of criticism for the government’s massive overhaul to the autism program. Her former role as Minister of Children, Community Services will now be headed by Todd Smith, who is promoted from economic development.

Lisa Thompson takes over as Minister of Government and Consumer Services, being demoted from Minister of Education. Thompson had been repeatedly criticized for sending mixed messages and a nasty battle has begun to loom with teachers as their contracts expire and class sizes increase.

Jeff Yurek becomes Minister of Environment. He had been Minister of Transportation but that portfolio is now held by Caroline Mulroney, who had been leader of Francophone Affairs.

The significant changes come about a year into this government’s reign. One new ministry has been created along with five associates in the changes announced at Queen’s Park in Toronto.