The Ontario Forest Industries Association (OFIA) is a provincial trade association and is the home of CLA Grading and Inspection. For the past 76 years, the OFIA has represented big and small companies that manufacture every type of wood product in Ontario.

The Canadian Business Journal recently spoke with OFIA CEO Jamie Lim and its Director of Forest Policy Ian Dunn about the current initiatives and future hopes and expectations for the organization as it continues to promote the responsible use and regrowth of Ontario’s forests. The forest industry has a value of $15.5 billion for the provincial economy on an annual basis.

The fact that so many large international companies are able to sit at a boardroom table with family-operated companies and effectively develop a business plan and a pathway that is always looking towards what is best for the sector is a testament to the foresight of the companies and the effectiveness of the OFIA. Lim says companies will routinely set aside their own specific objectives and goals for the betterment of the sector as a whole.

“In the 15 years that I’ve been here we’ve only had one vote at the board table,” Lim reveals. “There are always great discussions about what it will take to grow this renewable sector in the province and the board gets there with a consensus. It’s an awesome process to be involved in.”

The OFIA is committed to three main pillars of sustainability: environmental protection, social development and economic development. Most, if not all, provincial and national associations within the forestry sector adhere to these three pillars.

For the vast majority of people involved within this industry they’ve spent most of their lives growing up with forests in their backyards, and showing a deep respect for nature. As an example of the caring shown by those within the sector, Lim points to a company called Shaw Lumber in Pembroke.

“They have been operating on the same land base for six generations. You can’t do that unless you clearly understand sustainability and respect. It would be shortsighted for any of my members to just look at harvesting today and not thinking about 20, 40 or 60 years from now,” she notes.

When the OFIA develops its forest management plans, the development is not for the five years but rather the plans encapsulate initiatives for the entire next generation. The process is simple: plant, cut and repeat – all on the same land. Lim points to a phrase Ontario Minister of Natural Resources and Forestry John Yakabuski said, which sums up the industry with exceptional accuracy: ‘it’s slow farming.’

“It’s a great way to describe what we do,” says Lim. “Our crop doesn’t grow in a summer season. Our crop takes longer to grow but it would be negligent of us if we weren’t ensuring that there was a healthy forest following our harvesting. In Canada, it’s also the law. Regeneration is part of the legislative commitment.”

About a year ago Lim and her colleagues met with all three main political parties and suggested to them that Ontario needed to put together a provincial forestry strategy that would look at growing the responsible use of our renewable forestry resource.

“In Ontario, we harvest 0.2% annually of our forest,” reveals Lim. “Finland harvests about 2%. We’re hoping the provincial forestry strategy that was announced with the new government will provide a method on how we can grow the use of our renewable sector so that northern and rural Ontario can grow their economies and provide good-paying jobs. It will benefit the entire province at a time when the entire world wants more wood.”

“We’re harvesting a very small amount of the total growing stock but we’re also harvesting much less than is grown each year and that’s the idea of the sustainable yield, which is what forestry is all about. Of course we regenerate through planting, seeding, natural regeneration and it’s a very high success rate here,” adds Dunn.

There are still challenges within the sector that Lim and Dunn would like to see resolved, including of course lumber disputes with the U.S. If any future agreement ultimately leads to a negotiated deal Lim says it will be vitally important to ensure that it protects Ontario’s market share under acceptable terms and will allow it to continue to grow in the future.

“We are defending the forest management practices that we have here in Canada. We’ve never lost a legal case in a trade dispute,” says Lim. “Over my 15 years at OFIA I’ve noticed that a lot of government policy is based more on political science as opposed to sound, pragmatic science,” she says.

Special interest groups often tend to get involved in this industry and at times can seem to have a great deal of influence on government.

“It strikes me as odd that these groups such as the large United States environmental group like the National Resources Defense Council (NRDC) would have such influence on Federal Minister of the Environment and Climate Change Catherine Minister,” says Lim.

“These groups push a campaign – for example on Cariboo – which started in about 2005. At that time they linked the reduction in Cariboo population on one factor – disturbance. Their thinking would be if you stopped disturbance, the Cariboo would recover. Now, 13 years later and yet the federal government is pushing policy based on that 2005 theory. We’ve been encouraging both the federal and provincial governments to look at the latest science and see if disturbance really is the only factor impacting Cariboo,” continues Lim.

The OFIA has requested to both levels of government that before implementing policy on Cariboo they need to exercise due diligence and the latest science and consider what climate change is doing to habitat.

“You can close down all of industry in northern Canada but if climate change is impacting habitat, it’s not going to help Cariboo. Decisions need to be based on real science, not political science backed by special interests campaigns,” says Lim.

It is a mandate of the OFIA to focus on working constructively with governments to develop pragmatic policy that promotes the responsible use of a renewable natural resource and benefits all of society.

For the 0.2% of what is harvested each year, the benefits are tremendous. The industry employs 57,000 hard-working men and women across the province. The OFIA works very closely with local municipal governments and Indigenous peoples.

“Affordable, guaranteed reliable access to wood supply is the key for us. We can’t run our mills without wood,” says Lim.

Just as important is the ability to access Crown wood in Ontario and for that you need a strategically planned infrastructure in northern Ontario. Northern and rural Ontario relies on Crown infrastructure off the highway and so it’s vitally important that road transportation is part of the strategy as well.

“By 2030 I would like us to be harvesting double what we are doing today. You can say that wood has been allocated to a facility but it doesn’t mean they can actually get in and harvest all of that wood. I want the barriers to be removed,” says Lim. 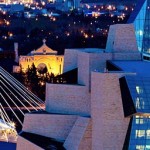