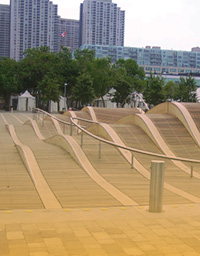 President of the Ontario General Contractors Association (OGCA) Clive Thurston describes himself as a strong believer in consultation, not confrontation. Mandated to promote Ontario’s contracting industry, Thurston serves as a proactive advocate of the general contractors in the province.

Founded in 1939 for the purpose of giving Ontario contractors a voice, in addition to addressing job-site safety concerns, today the OGCA drives the Ontario economy and is one of the largest employers in the province, notably with stimulus and infrastructure spending in recent years.

Representing general contractors in the industrial, commercial, and institutional sector, the OGCA holds the unique characteristic of being responsible for the largest amount of work being done in Ontario today, living by its slogan, “We Build Ontario”. As the only organization of its kind in North America, the OGC pushes its founding objective for balanced and transparent contracts between owners and general contractors.

This month, CBJ spoke with Thurston about the latest industry trends, specifically those which have recently struck the market—from the growing push for a green movement to the, as Thurston tells us, “meager impact” the economic downturn had upon the construction sector.

Could the Canadian economic downturn—plastered through the media for the past four years—really be a myth? That’s the story according to Thurston.

“The recession is a figment of the press’ imagination. If you talk to any economist, we scared ourselves into hurting ourselves. Canada is not the United States; Canada is not the rest of the world and we were not in as bad of shape [as the rest of the world],” Thurston says. “The construction industry was fairy busy. In fact, we still have work that we are trying to finish right through to 2011. The recession in Canada was created out of fear mongering, and it drove us into it.”

While Thurston does agree that the automotive and manufacturing industries certainly took a hit, it is his belief that it is unfair to assume the same for the construction sector, which never slowed down.

“We had the federal government decide to spend a whole load of money on stimulus and it just increased our workload; we got even busier. It was an interesting conundrum that people were panicking, thinking the sky was falling,” Thurston adds. “The panic lead to all these stimulus funding programs that had little thought and planning behind them…and many owners and contractors didn’t get involved because the deadlines were so unrealistic, they couldn’t be met.

“This so-called ‘recession’ was something we brought upon ourselves; it didn’t hurt the association or our industry. It just created far more work for us. Luckily, common sense finally prevailed and the deadline was removed. And, we move forward—we see a strong 2011.”
There was no consultation with the industry to what work could and couldn’t be done, meaning many jobs were rushed, leaving many owners remorse with a real question of value.

Costs going through the roof

Should the cost of going green always be front and centre, no matter if its price structure is significantly above the norm? Thurston feels differently.

“The green movement is a wonderful thing. Nobody can argue that moving forward in a responsible manner isn’t a good thing. It is what we should do,”

Thurston says. “But mandating it through legislation is subsidizing [the green movement] at the expense of the economy, which is not the way to do it. We have seen huge movements to mandate green building where the practical ability to do it does not yet exist and the costs are going through the roof. I’m not saying don’t [build green] because it is more expensive, but understand that there is an impact; let’s be realistic about it and realize there is a cost to it.”

The OGCA is light-years from where it was previously, improving its work methods and becoming more efficient and less wasteful, with a desire to move forward environmentally, but that’s something that shouldn’t slow the process of moving forward.

The LEED accreditation program has been in place for a number of years now but it is something Thurston feels should be set on a project-by-project basis—on what is achievable and what is affordable.

Such project costs, when seen by some owners as too expensive and/or over budget, are thus cancelled. Says Thurston, “And what is the first thing that gets cut when the owner gets the prices? LEED. What is the best way to build that building? You can’t paint everything with one brush, so we’re saying there is a cost, so don’t blame us when it is way over budget.”

“One of the biggest problems with environmental assessments is that they delay projects for years and drive up the costs,” says Thurston, adding that this initiative is being pushed to the government by the OGCA. “There is now liability coming out because we have rushed head-long into this without a lot of thought. Everyone thought it was going to solve the problems, but it isn’t…it is just one more part of the puzzle and it needs to be carefully incorporated.”

But with such a history success, what’s left for the OGCA to improve?

“The biggest weakness is still a failure by the political elite to realize infrastructure as a long-term investment in our country. There is no plan on how we’re going to address it. We’ve only dented [our deficit]…we still have failing pipes, bad roads, bridges deteriorating.…We have built a lot of hospitals and schools and things, but infrastructure is more than just buildings.

“A big part of what our association is involved in, along with a number of other associations through an alliance, is to work with the government to provide professional advice on what needs to be done, continuing to advocate very strongly a long-term plan on how we can rebuild this country. If we have no plan, there is no future for this province.”

Through the OGCA, members hear about changes to legislation first, as the association is well tied with the government and its ministries. The OGCA provides the most accurate and efficient responses to tenders and contracts and serves as an advocate and influence to owners.