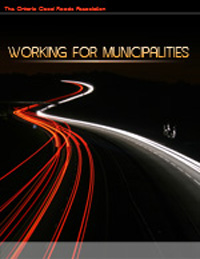 Working for Municipalities
The Ontario Good Roads Association (OGRA) is one of Canada’s largest municipal associations. The organization represents the transportation and public works-related concerns of 445 municipalities and also First Nation communities of Ontario. The OGRA has existed for more than 100 years, and continues to advocate, educate, and provide services to the municipalities as they provide transportation systems to the residents of the province.

The OGRA has several resources to help member municipalities including:  educational programs and services, new workshops, member forums and innovative electronic networks. The organization also keeps strong communications with its members in order to offer ongoing support. OGRA members are privy to a vast information exchange network and a support system through the association. Joe Tiernay, Executive Director of the OGRA, says that constant communication is key to the industry. Our website is updated on a daily basis, and we send out regular email blasts called ‘head’s up’ alerts, to make sure our members are aware of current issues. We also have a quarterly magazine, called Milestones and we offer webinars as well” Tiernay explains. Tiernay is the best spokesperson for the OGRA. He has 20 years of experience in municipal governments, including time in Alliston, Woodstock, and Ajax. In 2000 he moved to southern California to run an international association and was there for five years. He started his work with the OGRA in 2006.

The issues at hand
The OGRA is currently working on several initiatives in order to support their mandate. Tiernay says that the OGRA’s focus for 2009 is to advocate for sustainable funding for infrastructure. “The municipalities in Ontario have extensive road systems, bridges, highways – and they’ve always had an issue with having the resources to adequately maintain those resources” he says. “The province of Ontario needs to have a funding program whereby municipalities will be provided with a predictable amount of funding every year to maintain those structures. That’s our overriding objective – getting that funding in place” he continues.

The OGRA also “keeps an ear to the ground” at Queen’s Park, so budgetary or environmental issues will be addressed and the association can keep its members up to date. “We need to know when things are going to get passed if they’re going to adversely affect our members.”

The association is also working on other projects on behalf of its members. This includes advocating on Bill 118, which affects whether drivers can use hand-held devices like cell phones and other portable devices. The OGRA has advocated to have certain municipalities exempted from the Bill, which counteracts distracted driving. “Plow and truck drivers out in inclement weather need to communicate with their headquarters. We’re pushing for redemption for municipalities out of that legislation” Tiernay says.

Still focused on education
The OGRA, which was originally founded in 1894, was established as an education and training organization. Although the mandate has changed over the years, Tiernay says that education is still the “bread and butter” of the association. “It was a long time ago that we started to also focus on advocacy, but our education side is extremely important” he says. By offering necessary high-level member services, especially education, the OGRA ensures that despite the recession, municipalities won’t cut their membership. “The more services we can offer the better we’re able to help our municipalities – hopefully they won’t pick us as easy cuts because we offer so much.”

OGRA began offering education and training in 1901. They currently run a successful Municipal Infrastructure Training Program, T.J. Mahony and C.S. Anderson Road Schools and Water and Wastewater Operators Training, and courses including heavy equipment operator training, trenchless technology, leadership, supervision and contract administration. The association also offers seminars throughout the year, and all education is geared to professional development workers in the transportation and public works sectors, including management training.

Up and coming…
The OGRA is going to be working on some specific initiatives in the rest of this year, including the managed fair use of road side pesticides. Luckily for the association, they are “well-established and well-respected” Tiernay beams. This means that the OGRA can leverage their reputation to move forward on issues and consult with governments on key problems facing municipalities with regards to roads. “We don’t tend to get surprised very often – we usually get a head’s up when something’s going to be done at the government level” Tiernay explains. Having the government’s ear will certainly be of use this year and in the future, as Canada’s infrastructure continues to grow.

For more information on the OGRA visit www.ogra.org.

Mandate
The mandate of the Ontario Good Roads Association is to represent the infrastructure interests of municipalities through advocacy, consultation, training and the delivery of identified services.

This mandate translates into five main business objectives:
• To advocate for sustainable funding for municipal infrastructure.
• To advocate the collective interests of our members through policy analysis, legislative review and consultation.
• To provide affordable and accessible education and training services.
• To promote leadership with regard to infrastructure asset management.
• To develop plans, programs and partnerships for the delivery of services that meet the needs of our members.

History of the OGRA
OGRA has come a long way from its early days a century ago, when the “Good Roads Train” made its way across Eastern Ontario, pulling into stations with all the latest equipment for road building, and information for local farmers. In the span of a century, roads and road building in Ontario have changed more than in all of road-building history.

In 1894, the year OGRA was founded, the horse and wagon still reigned supreme, as they had since Roman times. However, Ontario roads were in a sorry state of disrepair compared to those built by Caesar’s legions. Cyclists and “wheelman’s” associations were the first to
lobby for better roads.

Ontario farmers depended on the railways to transport cattle, dairy products, and other produce to city markets. Even delegates to the founding meeting of the Ontario Good Roads Association were forced to use rail transport to get to and from their meetings. It was because of the vision and conviction of a few dedicated individuals that road reform took place. And the founders of the Ontario Good Roads Association laid the groundwork for a modern province-wide road and highway network.