Home | Business News | CBJ Newsmakers | Optimum Publishing International announces the release of What WE Lost: Inside the Attack on Canada’s Largest Children’s Charity

Optimum Publishing International announces the release of What WE Lost: Inside the Attack on Canada’s Largest Children’s Charity

From the Foreword: “If you bought into the negative narrative about WE Charity, I challenge you to read this book.”

In 2020, WE Charity and its founders, the Kielburger brothers, were caught in a political scandal. The reason? A government contract awarded to the organization to provide summer employment opportunities to Canadian students shut out of the job market by the pandemic. It was a program that the government could not build or administer. The civil service determined that WE Charity was the only organization with the speed, reach, and scale to deliver such a complex undertaking on such an impossible timeline.

But politicians like the NDP’s Charlie Angus and Conservative Pierre Poilievre wanted to tell a different story. They said WE Charity had received the contract because the Kielburgers were close to the Liberal Party and the prime minister. But if they were close to Trudeau, they were also close to Erin O’Toole, Peter MacKay, Stephen Harper, Doug Ford, Scott Moe, Charlie Angus, Rachel Notley, and a host of other politicians of all stripes who had lauded the charity’s work or appeared on the WE Day stage. An initial narrative about political cronyism quickly sparked scrutiny and suspicion of all the charity’s activities, including its development work supporting partner communities in countries across the globe.

The real scandal had nothing to do with the student grant program. It was a scandal of American-style partisanship and politicians willing to score points no matter the collateral damage they caused. A scandal of news organizations content to peddle misinformation and half-truths in a never-ending pursuit of clicks and likes. A scandal where the true casualties—the millions of people the charity served in Canada and around the world—were never given the opportunity to speak.

In What WE Lost, readers will get the inside story from a respected lawyer and former WE Charity board member, Tawfiq Rangwala. Using his evidence-based approach, Rangwala draws on first-hand accounts, exclusive interviews, and never-before-published documents to take you through the nightmare that became known as the WE Charity Scandal.

“We all know that at the end of the day, politics can be a dirty game. What makes this situation different, though, is that politicians—aided in part by the media—allowed the game to spiral out of control, and in the process, a lot of non-elected people got hurt … Our representatives … need to be held to account for their failure to even acknowledge the damage they caused,” writes Rangwala.

Along the way, the book reflects the voices of people central to the story who have previously been ignored or forgotten, especially students, teachers, and underprivileged people in countries like Kenya—all of whom were key beneficiaries of WE Charity’s work. And the book answers the important questions that were never asked. How could so much good turn into a shattered dream for an organization trying to change the world? How did one-time media darlings become pariahs accused of a litany of wrongdoing? How were misperceptions and confusion allowed to rule the day, creating a scandal where none existed?

In the end, Canadians are left to ponder whether the real “scandal” is the demise of WE Charity and the values of fair play and due process that most of us hold dear.

What WE Lost is published by Optimum Publishing International and will be available in Canada in March 2022.

Tawfiq S. Rangwala was born and grew up in Toronto, Canada. He completed his undergraduate degree at McGill University in 1999 and earned his JD from Osgoode Hall in May 2002. He moved to New York to start his career at the law firm Milbank LLP, where he is a partner in the Litigation and Arbitration Group. Rangwala specializes in representing companies and individuals facing investigations by government authorities, conducting sensitive internal investigations across various industries, and litigating and arbitrating a wide range of commercial disputes. He frequently speaks and writes about white-collar defence and government investigations, securities litigation, international arbitration, and issues relating to cybersecurity and technology disputes. In law school, he served as the managing editor of the Osgoode Hall Law Journal. Rangwala also devotes a significant portion of his practice to pro bono matters addressing systemic discrimination and injustices in criminal cases. He was named Chambers & Partners’ Pro Bono Lawyer of the Year for North America in 2021.

Strengthening Democracy, One Book at a Time.

A photo accompanying this announcement is available at https://www.globenewswire.com/NewsRoom/AttachmentNg/7eb1caa4-f28a-4983-9963-808cd4097fba 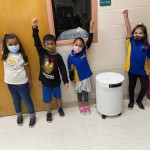