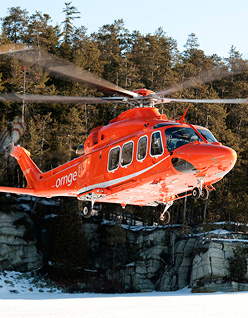 You hope to never have to use it, but in the event that you do, Ornge transport medicine can be lifesaving. That was how one-month old Ethan’s mother, Lisa, felt the day Ethan’s paediatrician made the decision to call Ornge paramedics to transport her baby from Markham Stouffville Hospital to the Hospital for Sick Children in downtown Toronto. The 40-minute road commute took only eight minutes by air, and today, Ethan is well.

Ontario-based Ornge (pronounced ‘orange’) is the world’s leading innovator in the emerging field of transport medicine—mobile intensive care units, essentially. Its global reputation stems from its experience in a province larger than 1 million square kilometres (the size of France, Spain, and the Netherlands combined), a diverse region with varying weather conditions.

A vital part of Ontario’s medical system, the organization operates from a number of bases across the province of Ontario and performs approximately 21,000 patient transports annually. Ornge coordinates all aspects of Ontario’s aero medical transport system, the critical care land transport program, and the authorization of air and land ambulance transfers between hospitals.

Ornge has transported 100,000 patients more than 33.5 million statute miles (54 million kilometres)—over 1,350 times around the earth or 6,898 times the length of the Trans-Canada Highway—in its rotor and fixed wing aircraft, along with critical care land units.

The success of Ontario’s transport medicine system is the result of the overhaul to the province’s air ambulance program. As the program developed, and need for a more sophisticated system grew, the previous model’s delegated authority created a tangled web of red tape and lacked a single line of accountability.

As the need for air medical transport grew in Ontario, it became apparent that a revised plan was necessary to ensure its sustainability. That led Ornge President and CEO Dr. Christopher Mazza and his executive team to look to improve the air transport program in 2000. In 2001, he started that process when creating the Ontario Air Ambulance Hospital Program which amalgamated all of the six base hospitals that were providing medical direction to the paramedics.
The initial step was to standardize the three level s of medical practice: primary, advanced, and critical. “We wanted to make sure that the critical care paramedic in Sioux Lookout was practising at the same level and training as a critical care paramedic in Toronto with the same entry requirements, same training, etc.,” says Ornge COO Tom Lepine.

In 2001, the team carried that same concept of standardization, quality assurance and improvement across the entire program, focusing on solidifying a line of accountability for any oversight.

“Once that was in place, we asked, ‘Where do you go next?’ We began working with the Ministry of Health (MOH) on improving accountability and the Commission on Accreditation of Medical Transport Services (CAMTS) was invited to accredit the program. Their finding supported the need for a single line of accountability for the entire system,” says Lepine.

“They looked at the system in Ontario and one of their recommendations was to have a single line of accountability and responsibility. That backed up the recommendations of two separate coroners’ inquests that also pointed towards the same direction.

“With that in mind, we said we would be that organization that would provide that accountability and build a system out of the existing fragmented program,” continues Lepine.

The challenge of amalgamating the aviation, medical and communications programs precipitated the creation of the not-for-profit Ornge, which now operates all arms of medical transport including operating their own fleet of PC-12’s,the contracting of flight service providers, employment and medical oversight of all transport medical paramedics, and screening all transfers of patients between hospitals.

Changes in the Ambulance Act were made to allow a non-for-profit entity to be appointed by the MOH to provide ambulance services. In 2005, acting Minister of Health George Smitherman designated the provision of air ambulance services to Ornge, with operations beginning in January 2006.

“Over a three-month period, we took over all of the paramedics and we assumed all of the aviation contracts which at that time were still being done by private carriers,” says Lepine. “We took over the communications centre, which used to be run by the MOH and amalgamated all that into one. We called that organization the Ontario Air Ambulance program. That later became Ornge.”

All aspects of air ambulance services were divested by the Ministry of Health and Long-Term Care in January 2006 and since became Ornge. Ornge, a not-for-profit organization, was created with the mission of developing a fully integrated, world class transport medicine system for Ontario.

“Our primary goals were to increase launch reliability, and to meld the culture of aviation and medicine into one unique transport medicine service, and all of that drives towards excellence in patient care,” says Lepine.

“Most importantly, we are reaching 15 per cent more patients.”

In December 2010, Ornge released a press release announcing a major milestone in its five-year history, the transport of its 100,000th patient. Ornge is also the first organization accredited for all three modes of transport: fixed wing, rotor wing, and critical care land by CAMTS.

“Six years ago, we inherited aged aircrafts, some with 20,000 hours on them, and, what we were seeing was a marked increase in maintenance, decrease in reliability which affected quality of patient care and ability to respond,” says Rick Potter, COO of Ornge Global Air.

To address this challenge, Ornge has taken steps to ensure a sustainable provincial transport medicine system for years to come. In September 2010, Ornge introduced its first AgustaWestland AW139 medically-equipped helicopter, which will be added to the fleet of aircraft, with several more introduced this year.

The AW139 is the most technologically advanced rotor wing aircraft in air medical transport and is the fastest helicopter in its class, capable of operating in Ontario’s wide variety of challenging weather conditions.

“When we started looking at purchasing our own fixed wing fleet we did a fairly exhaustive study of patient movements probabilities, lengths of trips, and we distilled down a mission profile and from that we went to the industry and looked at all available product that would be there to replace our aircraft,” adds Potter. “What we did do was on the fixed wing side of the equation and we ended up buying 10 PC12 aircrafts. We wanted an aircraft with range and capability for long legs and we selected that aircraft after a thorough procurement process.”

Ornge has also opened Canada’s first Transport Medicine Centre of Excellence in Thunder Bay, a facility capable of housing all three forms of transport medicine: fixed wing, rotor wing, and land units. A similar facility is slated to open in Hamilton, along with a satellite base at the Oshawa Municipal Airport in 2012.

Recognizing that Ontario’s youngest patients are often the most vulnerable, Ornge has a specialized paediatric team—paramedics and nurses trained in paediatric critical care.

Although their primary vehicle is a critical care land ambulance, staff members are trained in all three modes of transport—fixed wing aircraft, helicopter, and land—any of which may be utilized depending on the location of the patient anywhere in Ontario.

In the spring of 2011 the program was officially launched, named the Ted Rogers Paediatric Transport Program, in honour of a $250,000 donation from the Rogers Foundation. The proceeds were used to purchase specialized equipment and to provide training for crews.

“Paediatric patients are not simply small adults. We recognized the need for a specialized service to handle the transport of Ontario’s youngest and most vulnerable citizens,” says Lepine. “Thanks to the dedication of our frontline staff and the generosity of the Rogers Foundation, we are proud to be able to deliver this important program.

”On the day this article was written, there were 49 patients transported to a health centre providing vital medical care; the longest flight was 521 miles. This incredible service—the envy of the world over—is working day and night for the care of Ontarians.