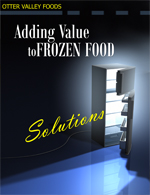 Otter Valley Foods, based in Tillsonburg, Ontario, is a premier manufacturer of co-packed and private label frozen entrees. The company is in a prime location to service its main markets in the U.S. and Canada, in the heart of farmland and major transportation routes in south western Ontario.

Otter Valley is one of the only North American companies to be USDA, FDA, and Agriculture Canada approved to produce red meat, poultry and seafood in frozen products, and also offer a huge range of starch, vegetable and sauce food options. The philosophy for success is simple for Otter Valley, says John Kelly, President: “We just don’t sell a food product; we sell our plant and people capabilities”.

The company’s strategy was developed after years of hard work.

Changing focus for long-term success
Otter Valley Foods was first incorporated in 1984 in Tillsonburg, Ontario under the name Wedgee’s Foods. At the time, just 14 employees made fresh and frozen pizzas for the local retail market out of a 5,000 square foot plant. By 1987, pizza had become less of a focus for the company and Wedgee’s started pursuing new markets with products like lasagna, cabbage rolls, meat pies and chili.

By the end of 1988, the strategy to diversify was helping the company become the premier co-packer it is today, as the company was supplying major customers across Ontario. The very next year, Kelly and his brother, Peter, purchased Wedgee’s and changed the company name to Otter Valley Foods. Kelly says by this time, the company was ready to “take business to the next level”. Being able to market their own branded products quickly became the secondary focus: “We weren’t a big contender in the market at the time, and we didn’t want to compete with other companies providing the same thing. So we thought perhaps we should continue to grow our business by providing products to those companies who already have established relationships with their distributors. We decided to stop selling Otter Valley branded foods. That’s where our current strategy came from, changing our focus to selling our capabilities instead of a product.”

Otter Valley soon had grown faster than Kelly could have imagined when he took on the Otter Valley name. The company built a new 25,000 facility to house its operations, and by 1991, 75 people worked with Otter Valley.

Shortly thereafter, Otter Valley Foods became the first processing plant in North America to earn HACCP certification from the CFIA allowing them to sell their frozen entrees coast to coast in Canada. Being able to sell seafood and meat frozen entrees gave the company a monumental competitive advantage. They still retain that advantage today, which will help them during the economic downturn. Kelly reassures that “sales are a bit soft, but we’re still expecting to meet our targets”.

Working with national partners
Otter Valley works with popular Canadian food stores like M&M’s, and currently do almost 30 products for the M&M’s chain. Private label has become a prime source of business for Otter Valley – the shift of Canadian consumers to private label products has done wonders to boost Otter Valley sales.

Kelly explains that since the private label boom in Canada, the reputation for those products has gotten progressively better. “It used to be with private label that customers saw them as sub-standard. They were lower-cost and were not an option for a discerning customer. Now the products are much more popular. Canadians really have gotten into private label – and now private label is also bigger in the States because of the recession” he says, adding “now so much more is going into private label, and most of our customers want better than the national brand at a lower price”.

Keeping up with health trends
Of course, dieting trends and health food preferences have also boosted Otter Valley’s business. “We went through the trans-fat phase, and also lowered the sodium content in much of our products. We’ve reduced fat and people are happy to be able to look at the label and know that they’re getting healthier products,” Kelly says. When it comes to the bottom line, Kelly says that trends can only help sales: “offering a healthier option only helps us gain market share. We can charge more for the product and it’s basically a smart marketing strategy”. Either way, in the type of market Otter Valley serves today, companies that don’t market healthier products don’t do as well. “Now, if you do nothing, you look bad” Kelly says. Doing nothing in the food industry is a definite no-no, especially when it comes to safety. Many Canadian companies have had to face heat for putting products on shelves that aren’t safe. Kelly says that now, Otter Valley has completely eliminated certain ingredients in their products because of customer fears. “We get phone calls about health scares with products from China,” he says, “and we simply don’t use products from China anymore – it just doesn’t make sense”. Using locally produced ingredients keeps shipping costs down, so in the end, using local ingredients is just another way Otter Valley is improving their market potential.

A long way from just pizza…
Otter Valley has grown in leaps and bounds from the company’s early days as Wedgee’s. “Early on in the development of our company, we realized that we should be selling our capabilities as a company”, Kelly says, adding “which means that now not only do we sell a food product but we also sell based on our people power”. Otter Valley continues to explore new markets, and offers a wider suite of services to new and existing customers, including graphic design for packaging. “The key thing is to be diligent, and on top of the game to stay ahead of our competitors,” Kelly reasons.

Otter Valley works to partner with its customers, and help them function as an extension of the company business. The Otter Valley Product Development Team, Package Design Team, QA, QC, Food Safety and Food Security Teams, are reinforced by experienced production people and a state-of-the-art production facility.

The company is proud to employ mostly local labourers, and their reputation in the community has made them a “great place to work,” according to Kelly. Indeed – Otter Valley has earned the ability to be deemed one of the most versatile and reputable food manufacturers anywhere. For more information about Otter Valley Foods, go to their website at www.ottervalley.com.