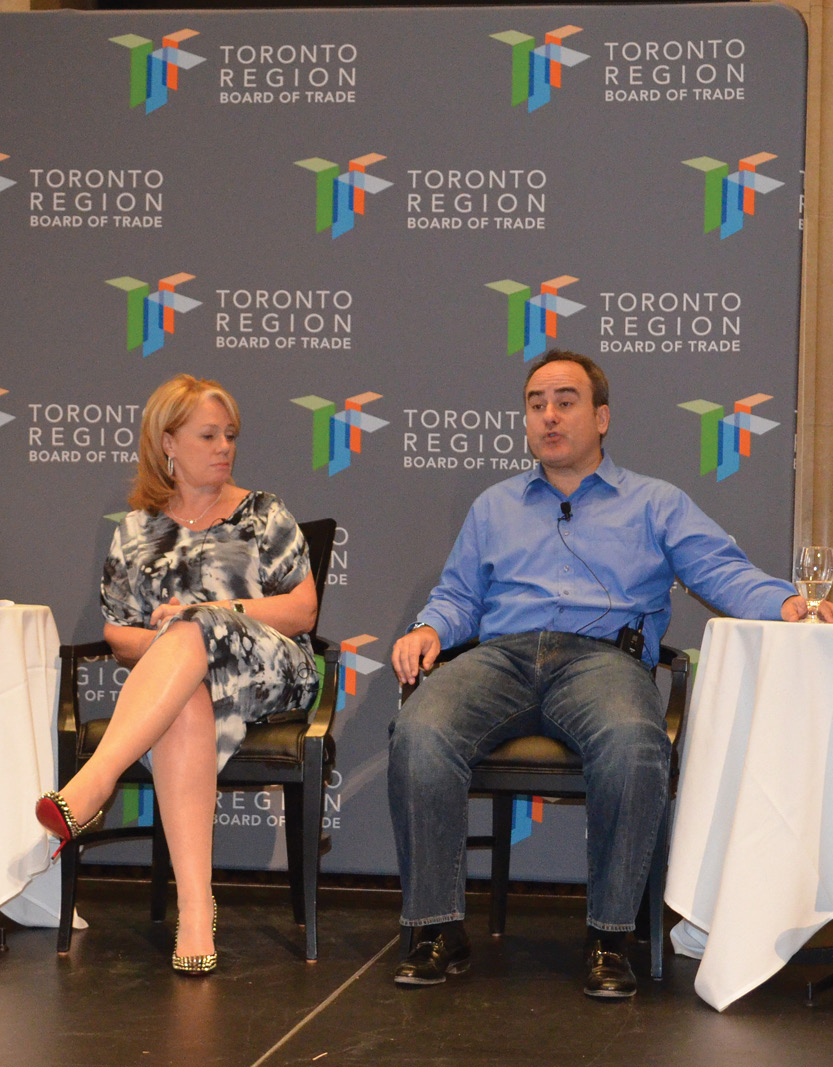 In order for the national economy to continue to expand there is the inherent need for innovative startups to be able to access the type of funding needed to generate ideas that could be trendsetting on a regional, national or even international basis. But Canada has predominantly been known for its conservatism in branching out beyond the safety net of pre-established known limits. Oftentimes there’s been a wait and see attitude as to how it works elsewhere, such as the United States before we’ve shown a willingness to jump on board and support business innovation.

Angel investing is the most obvious form of venture capital provided by an affluent business or individual looking to support a startup venture. This becomes the most logical option for small enterprises that have yet to earn a strong enough reputation on their own to generate capital within the public markets or even secure a large enough bank loan to get their idea off the ground.

Canada was recently ranked 14th among 15 countries in venture capital investment, which accounts for a scant 0.031% of our national gross domestic product. Venture capital is a key part of any country’s innovation ecosystem – Canada’s low-risk attitude is now clearly hindering progression of some innovative companies. The goal is to try and break down many of those long-standing barriers which hinder growth.

In an event sponsored by the Toronto Region Board of Trade, Tony Lacavera, Chair and CEO, Globalive Holdings and WIND Mobile served as moderator for a panel discussion on this very topic, which included Arlene Dickinson, CEO of Venture Communications, Cam di Prata, private investor, Gibraltar & Co. and John Ruffolo, CEO OMERS Ventures, one of Canada’s largest pension funds.

Be it small to medium sized businesses or even larger ones, there is a need to open up greater opportunities when it comes to venture capital. But changing the culture is easier said than done.

“I think one of the biggest things that’s missing in the Canadian environment is the celebration of entrepreneurialism,” Dickinson begins. “There is nothing visible in terms of recognizing or rewarding entrepreneurism along the journey. If we don’t celebrate it, it doesn’t gain importance in our culture.”

As Edmund Burke famously stated “Those who don’t know history are doomed to repeat it.” With that in mind Dickinson reminds us of how quickly fortunes can change if business strategy remains too conservative, hoping to continue with the status quo and not embracing change and innovation.

“Nortel is a great example of a company that didn’t take risks,” Dickinson continues. “I believe that risk is sometimes about taking a step backwards instead of taking a step forward and re-examining where you are in order to reinvent yourself. Canadian companies like Nortel, if they’d taken a step back they would have likely seen that they were sitting on a billion dollar intellectual property that could have changed the entire shape of what the organization could have been moving forward.”

Instead, we all know what happened to Nortel. The once colossal telecommunications and data networking equipment manufacturer ended up shrouded in bankruptcy and scandal. Three of its former executives stood trial on criminal charges, but all were exonerated. Still not much satisfaction for shareholders who once held stock valued at a peak of $125 per share, only to see it virtually turn into dust.

Ruffolo focused his initial comment on a recent study that compared Canadian entrepreneurism with the rest of the world and the success rate in creating new business.

“What was interesting to me was that Canada does fairly well, actually higher than the U.S. on a per capita basis for creating small businesses,” he tells us. “In fact, in the first five years of the lives of those businesses there was really no discernible difference between Canadian and American entrepreneurs. But interestingly after the fifth year there was a noticeable divergence, and the question is, why did that occur? Is it a cultural issue with Canadians in being entrepreneurs? My personal view is I don’t think culturally there is an aversion to entrepreneurship in Canada but I do agree that we don’t celebrate it like in the U.S.”

“When I look at other industries, and I’ll pick off the oil and gas industry, when I talk with folks from Silicon Valley they say the craziest entrepreneurs they’ve ever seen are those Calgary oil and gas folks. Interestingly we’ve got great entrepreneurial talent in this country.

It seems the essential difference boils down to one primary element – the fear of failure. It’s an unwillingness to put oneself far enough out on the branch wondering if it will hold. It’s not that success comes any quicker or easier in other regions of the world; it’s merely that they don’t give up after one attempt.

Often the general progression will be a first-time failure, followed by a second startup venture that raised more money, resulting in a decent outcome where money wasn’t lost but it’s sometimes not until that third attempt that success may be reached. Ruffolo says a cardinal sin is to ignore your first forays into business, pretending as if those failed attempts never happened. Once again, if you don’t learn from your mistakes, you’ll continue to make them over and over again was his message.

“Those aren’t failures,” Ruffolo follows up. “Those are learning experiences. I’m far more interested to hear your story now that I know you’ve tried something else.”

“I think the interesting dilemma is when we look at who takes risks in our economy when it actually breaks down,” adds di Prata. “My experience as an investment banker tells me that where risk really does break down is as the institutions in this country get a lot larger, whether they’re providers of capital or institutions in enterprises creating goods and services, you’ll find that with the increase in size in stature that’s where our risk taking abilities actually go down.”

Di Prata says we rarely think boldly in this country to the point that it’s going to achieve greatness in developing innovative new business models. Additionally, we very rarely think outside our immediate boundaries. The idea that the market has now transcended this doesn’t seem to come in to our DNA and the idea of taking risk takes on a whole different meaning.

How can potential entrepreneurs gain better access to financing and what can capital lenders do to enhance relationships in de-risking ventures and assist them in the progression of a business plan, given our environment of risk aversion?

“I don’t think that capital is always the answer,” di Prata responds. “Success is a function of intellectual capital as well as financial capital. I think financial capital at various levels of growth is probably reasonably abundant but the differentiator is if you can marry that capital with access to networks that in the cases of entrepreneurs are very rare to actually be found.”

A criticism of some young startups is their desire to go public before they’ve fully matured with a lack of infrastructure to make it to the next level. Financing alone doesn’t solve all the outstanding roadblocks.

“Now what we’ll do is act as if they went public with one investor; give them the time to grow globally and then we’re they’re actually ready to go out in the public markets they’ll be a very sizable company or perhaps when an acquisition offer does come through it won’t be for $100 million or $200 million but it will be for $5 billion or $10 billion.”

The notion of de-risking entrepreneurial activity from an ownership standpoint is quite contradictive unto itself.

“I think that strategically VCs need to think about risk reward and stop having this notion of a homerun,” Dickinson interjects. “What’s wrong with singles and doubles? Why do we have to knock it out of the park all the time in order to be able to say that we can access funds? And why are we all chasing the same opportunity? My view as an entrepreneur is that I want to focus on my business and what I do well and I want a financial partner who can help come along with me.”

With small to mid-size businesses forming the backbone of the Canadian economy, the need to support these enterprises is vital to sustain and build employment numbers. They build economic value more slowly over time, but they do help mold the overall business landscape in both the near and long-term.

Government involvement is another aspect that potentially can provide leadership within the community and help break down the barriers of VC risk aversion.

But the need for government involvement is not something supported by everyone.

“I believe the private sector should be the driver all the time and where government could actually play a role is in the areas of public policy that are difficult for the private sector to deal with,” Ruffalo states. “One great example that the federal government is taking care of is on immigration policy. The immigration and VISA policy that’s just been launched. Case in point, 60 per cent of all startups in the United States last year were started by immigrants largely driven by the great school system in the U.S. and the engineering schools particularly driven by immigrants.”

Venture capital is just one method of raising capital for a startup, albeit an extremely important one. Government can at times assist with other sources of capital. In the last federal budget the government set aside $100 million for accelerators and incubators as well as a $400 million program for venture capitalists.

“I think the BDC is an example of a model that’s really dedicated to creating success stories and financing them,” di Prata adds. “But I think the government can step it up in two areas. The first is procurement. They are a big consumer of goods and services and the idea that they could have a procurement policy that is aimed at services that are solid Canadian stories is a strategy they haven’t exploited fully enough. Secondly, if you truly want to address risk aversion it starts with education. How can provincial governments infuse the idea into students at an early age about the idea of risk and how to handle it.”

Dickinson believes government should only be involved to fill the gaps, whether it be from angel investing to VCs and growth capital, there is a need to ensure there’s always enough support along the way.

With that in mind it’s easy to ascertain why some people would be wary of potential government rules and regulations with respect to capital lending that would make the lives of business people so difficult it would take them far too long to ever be able to access it. An individual with an entrepreneurial mind is not necessarily a financial wizard. The two skills are inherently different. That sometimes seems to get lost along the way.