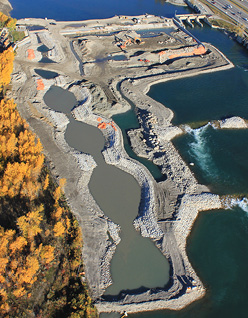 Parks, pathways and green spaces add an intangible positive element to any urban centre. Parks Foundation Calgary is a non-profit organization that has dedicated more than 25 years to promoting this very cause. As part of our special Alberta focus, we explore this important group and discover a fantastic project underway called the Calgary Greenway.

“The Parks Foundation has quite an amazing history of doing capital projects and park developments, and preservation of natural areas all throughout the city,” says CEO Myrna Dube, who has been with Parks Foundation Calgary since 2009, but was familiar with the great work achieved by the organization long prior to her arrival. “There has been more than $135 million of projects completed over the last 26 years,” she says.

Parks Foundation Calgary has undertaken a number of successful projects involving the revitalization of green space within the urban Calgary landscape. Completed projects include Calgary Rotary Challenger Park, Elliston Park, and Gerry Shaw Gardens, amongst many others.

Currently underway is the Harvie Passage project on the Bow River. This river has a weir to divert water for irrigation, a necessary tool for farmers, but has proven to be an extreme drowning hazard and has claimed the lives of numerous victims. The Harvie Passage reconstruction that was started by Parks Foundation Calgary ten years ago is nearing completion right now, and “is a major feat,” for the group.

This is a perfect example of how PFC liaisons resources from several places to effectively see a project through completion, including the Harvey family through the Calgary foundation, and government of Alberta.  “We brought it all together and are managing it from our offices here,” says Dube.

The most important and ambitious project to date is a major $53 million project called the Calgary Greenway. This massive project is a 113-kilometre linear pathway which will encircle the city of Calgary. “This will be an open space corridor is a wide 3.5 metre pathway are not only rest nodes, many parks, playgrounds, off leash dog areas, many wetlands, for school programs, ducks unlimited programs will use the wetland development for further education,” says Dube.

“We also are planning two very unique things. One of them is an outdoor fitness park that will have outdoor fitness equipment for the whole family and it will also have a training circuit.” Dube elaborates on the plans, explaining that  adjacent to the wide pathway there will be another track with a specialized surface for running. “That will have metre markings and all those kind of things for people that are training.”

The business of fundraising

Parks Foundation Calgary relies completely on fundraising for all of its projects and is thankful to have a dedicated team who believe in the cause. Jim Davidson is a very well known philanthropist in Calgary and acts as chairman for the fundraising for the Calgary Greenway. “He is opening a lot of doors because he has a lot of contacts in the business community,” says Dube.  “He and I are very busy going to many meetings and we are getting major support for this project.”

Funding comes from many different sources, including government, corporate sponsors, and individual donors. Parks Foundation Calgary works with developers as well, as they often link the organization to those needed green spaces. The Calgary Greenway is being developed on land that belongs to either to provincial or the municipal government. “[Government bodies] are allowing us to use the transportation utility corridors are slots of land they have beside roads, paralleling the stoney trail,” Dube explains. “We are reducing our ecological footprint in the city, and it is thanks to the province we are able to do that.”

The advantages of such a project are not a hard idea to understand, and a likely reason PFC find so many generous donors.  “The benefits are on many levels. All of us are focused on health and wellness today, and what we are providing is free recreation that is available to everyone, and everyone can use this system outside their back door. You are making an opportunity for people of all ages to be healthier.”

Businesses and individuals who financially support and contribute to the project obviously see the economic benefits. “Whether you call those economic or not they are economic because you are making people healthier,” Dube explains, relating this to overall liveability in a city.

“At the end of the day we are enriching the urban fabric of Calgary by creating parks, pathways, playgrounds…we are making a big difference in the city.”