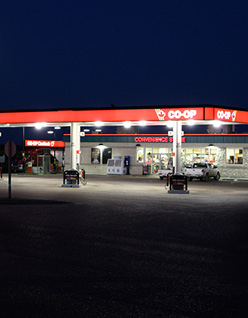 Parkway Co-op is a business with a difference. A retailer with three food stores, two convenience stores, a cardlock, and a bulk plant, the Parkway Co-op has locations in three Manitoba communities: Roblin, Rossburn, and Grandview.

Beginning in 1945, the Parkway Co-op has over the years grown with its mission to “provide goods and services with a socially and environmentally responsible, financially sound, co-operative structure taking advantage of sound business opportunities.” Today, the Parkway Co-op has focused on continued growth by consistently upgrading its services, as well as asset upgrade and replacement.

Parkway Co-op looks to its history to guide its future. The company has invested in itself, in terms of both facilities and equipment, and as a result has seen more than 40 per cent in business growth over the past five years. Moving forward, Parkway Co-op has prepared to keep pace with its competitors by being innovative leaders, and leaders in its communities, while the company also acknowledges how the combination of long-term planning and technology has allowed it to take charge of its prosperous future.

As an example, the Parkway Co-op has bolstered its web presence through social media means like Facebook and Twitter, and its constantly updated company website allows the Parkway Co-op to pursue the new community that is the cyberspace community. Parkway Co-op understands how technology plays a role in the continued growth of the organization as a whole.

Planned expansion is also in the works for the Parkway Co-op. This year, a new gas bar and cardlock is under construction in Rossburn, while the Roblin cardlock will expand next year, in addition to the opening of a new food store in Roblin as well.

“People come to the Parkway Co-op because they recognize the good we are doing in our communities and the quality goods and services that we provide,” said Mike Nord, General Manager, Parkway Co-op. “I also think it is evident that the asset upgrade and replacement that has taken place already is having a positive effect on our business.”

Parkway Co-op attributes its success to teamwork and by sticking to the core values that align with the company’s successful past. Parkway Co-op also points to its parent company, Federated Co-operative Ltd., as well as its sister co-ops, as a network of success for the company, allowing for internal learning, innovation, and continued growth.

“In a time when people were losing trust in big companies and corporations, people realized that our values were their values as well, and not only supported us, but helped us continue to grow,” beamed Muriel Lowe, Board President of Parkway Co-op.

In a business model by the people for the people, no partners or investors are found in the management structure that makes up the Parkway Co-op. Rather, the company is made up of locals. Company earnings are kept locally, whether it be reinvented within the Parkway Co-op, or invested in the community.

With a focus on environmental responsibility and sustainability, the Parkway Co-op has created the ‘Bags to Riches Program’, a campaign which encourages customers to reduce the use of plastic grocery bags, while promoting the use of recycled, environmentally-friendly bags. Members returning plastic bags to the store are reimbursed two cents per bag, money which can be credited toward a purchase, or donated to a local charity. An additional two cents is credited for each eco-bag used. Lowe said, “We do a lot for our local communities and this is just one example. It is really who we are. We were created by the people, for the people. Even though the Parkway Co-op is a small company, we still believe in thinking ahead and the longevity of our world.

“Last year we returned almost 70 per cent of our profits back to our members, and what other business does that?” Nord questioned. “We are local and we are here for our communities. The Parkway Co-op business is different than most because we are not all about making profits; it is about doing what is best to be profitable.”

The Parkway Co-op truly understands the benefit of being a smaller organization. As Lowe summarized, “We’re Canadian, we’re local, and we’re proud of that.”