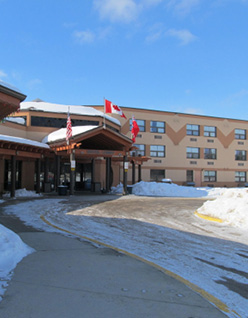 Building for the community

The Opaskwayak Cree Nation is one of Manitoba’s largest land holding First Nations grounds, with territory near The Pas (about 630 kilometres northwest of Winnipeg). Known as the Gateway to the North, the district is home to over 15,000 people, about 4,300 of which are Opaskwayak.

The Opaskwayak community has a long history of entrepreneurism and industrialism, having originally settled in the area to create trading opportunities surrounding the Hudson Bay trading post.

The Opaskwayak community is looked to as a model for a self-governing First Nations community for its success as an autonomous nation and its close working and social ties with surrounding non-native communities, an achievement supported greatly by the Paskwayak Business Development Corporation (PBDC). The PBDC’s origins go back to 1968 with the opening of the band administration office on the reserve. The purpose of the administration was to provide a forum for band government to deliver welfare and general administration with an ultimate goal of self-sufficiency.

Building on the momentum created by the administration office, the PDBC was incorporated in 1987 with the mandate to continue the economic development of the Opaskwayak Cree Nation through involvement in commercial development and investment initiatives.

The PDBC’s momentum has accelerated under the prescience management of its leaders in the last 25 years. Today, the PBDC oversees 10 businesses, including the Aseneskak Casino, The Pas IGA, the Gordon Mathline Memorial Centre, the Otineka shopping mall and the Kikiwak Inn. The PBDC provides employment for about 450 people, 225 of which are band members, making it the second-largest employer in the community, and by providing financial supports through its business development wing, is an invaluable and far reaching support for the entrepreneurial spirit of the community.

Duncan Constant has served as President and CEO of the PDBC since 2007, and has been with the corporation since its inaugural year. He spoke to The Canadian Business Journal about the challenges and achievements he has faced in his tenure.

“Some of the challenges we see are upstarting new businesses where it is hard to maintain the front line workforce,” says Constant. “That has a lot to do with the pay scales. In business you have to streamline your overhead so it’s not like you can give everyone a top salary from the gate. You have to grow the business and treat it as on par with mainstream business Canada. You have to exercise the same standards.

“We think we have been doing an excellent job in achieving those kinds of results. One of the challenges we had was to train and promote our membership to take on the lead roles of most of the corporations

The PDBC is currently assembling a proposal for work on the electric power transmission Bipole III Transmission Reliability Project, targeting work on the Conawapa dam, a 1380 megawatt Conawapa project which will require steel work and cement work, and provide “plenty of opportunities to achieve some of those goals in expanding our company and expanding those contracts,” as Constant sees it.

PDBC has been successful in winning contracts in the past because of its established reputation. “We have established a history for ourselves, quite successful that we enter into and currently operate, and we feel we can also move and step into the global field here.”

The PDBC is also embarking on a large expansion to the Kikiwak Inn — so called after the Cree word meaning “your home away from home.” With the guest’s ultimate comfort in mind, the Kikiwak Inn also exhibits a Paskwayak cultural education, decorated with artwork from the community and a lobby designed like a large teepee. The Kikiwak Inn will get 40 additional rooms and larger facilities to accommodate the number of guests and conferences held there, a project which will provide short-term employment in the community.

For now, Constant is now setting his sights on celebrating yet another endeavour, the opening of a truck stop on Highway 6 and 60. This brand new business will provide gas and amenities for travelling those routes. Of course, no stop is complete without a Tim Hortons, and this truck stop has one of those, boasting the No. 1 sales in Western Canada during its opening week.

Constant says that all the revenue from PDBS ventures goes “directly in Opaskwayak Cree Nations Administration, redistributing funds to cover programs such as fire, sanitation, road maintenance, medical assistance and so forth.”

According to the PDBC, “Through its initiatives, investment and program provides the Opaskwayak Cree Nation and its members with the most valuable of benefits, specifically the freedom to make their own choices. This freedom and independence is now available to all First Nations by accessing the experience and knowledge of the PDBC.” With Constant’s leadership, the PDBC will continue to provide for the future of the Opaskwayak First Nations.