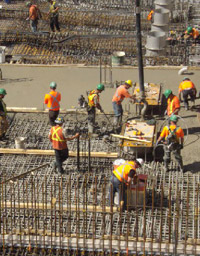 There are some projects where, despite the curves, studies and pieces of paper stretching as far as the eye can see, it really comes down to a company that goes out and makes the ideal a reality. When Peel Region Water Treatment embarked on its Phase One level of a project on two water treatment plants, it was exactly one of those moments.

These projects are the $200-million Lorne Park Water Treatment Plant Expansion, and the $350-million Lakeview Water Treatment Plant Expansion, both in Peel, Ontario. As Andrew Farr, Manager of the Treatment Capital Water Division says, they are intrinsically linked and, although both entirely separate drinking water facilities, are best understood as one project. The goal: to have enough water treatment capacity to meet the regions needs up to 2031. The story: one which has opened the door to a whole new means of large scale advanced water treatment.

Farr says that when we’re talking large-scale projects, we’re talking really large. “There was always a prediction of how much advanced treatment would cost on a large scale—large as in a million people—versus what has always been done on small wells and small towns where they had a particular issue they wanted to deal with,” he says. “We broke that curve. They always assumed that it was a straight line and that if you went from 10,000 people to a million people, it would be 100 times more.”

But this manner of thinking is no more, thanks to the Peel Region Water Treatment’s dual plant project which has allowed manufacturers, constructors and engineers to experience building this sort of project, once deemed uneconomical.

“Everyone said they wanted to but when it came down to actually deciding, no one could see the reason to do it. People worried about cost too much, they worried it wouldn’t work, but we didn’t see that,” Farr says.

“We saw what would be the risk of not doing it and in the long-term we just couldn’t fit enough conventional treatment and filtration on our facilities to meet the needs without starting to buy surrounding properties.”

These two water treatment facilities, both aimed at servicing residential and industrial growth in Peel, are situated on the east and west side of Peel and provide drinking water for what Farr calls South Peel— Mississauga and Brampton. This project is not just about making sure that there is enough water, but making sure it meets consumer expectations, all of the regulations in Ontario that come out of the Ministry for Environment and making sure that the company makes good value investments and realise that these facilities have to operate well into the future.

“[This involves] knowing that there are always emerging issues in terms of water quality and emerging regulations that we need to stay ahead of,” Farr says.

“For example, we wouldn’t want to have to spend this $550 million or whatever it might end up being, then in another five years we have to spend another $100 million because the regulations change or some new contaminate of interest comes out and we need to treat for that.”

As such, nothing is actually amiss with the current facilities, but instead the company plans to combat future requirements before they appear; treating for current regulations and issues that we predict into the future.

Farr notes that while the current facilities, “produce great quality water, it tastes good and it’s safe,” the key here is long-term investment. “We’re not saying what we’re doing is ‘wrong.’ They were built during the 60’s and late 90’s,” he says. “Do we want to continue with that or go to the next level where we’ll probably want to be in 45-50 years?”

The project and its move to new technology began in late 2002/2003 when work began on the last expansion at Lakeview and Farr says that regional support has been incremental in the progress during the interim.

“The region of Peel is very progressive it its decision-making and how it looks at the future and looks at how to spend taxpayer’s money wisely,” he explains. “We only finished that in 2007 and the one that we’re doing now is phase two. In Phase One we started incorporating new technologies like membrane filtration and things like that.”

One of the benefits in applying this new technology is space-efficiency. Both Lakeview and Lorne Park are rather space-constrained and these new technologies enable expansion and improvement.

“In order to again plan for the future, we only have two plants and we want to keep it that way— we don’t want to build a third one in the future,” Farr says.“We want to make sure we use the space in our facilities very wisely to leave room for future growth 50-100 years from now.”

“These are being sized for the maximum demand in 2031. The maximum would be a hot summer day in June/July/August in 2031,” Farr says. “We’ve really been an industry leader in moving to new technology.”

The project timeline begins with Phase One at Lakeview in 2002, then Lorne Park to follow, then back to Lake View for Phase Two of what Farr says is an entire program spanning roughly 10 years.

“With Lake View Phase One, that’s really when we decided that we wanted to move from conventional treatment to advanced treatment in any new facilities that we build,” he recalls. “We scoured every available new technology out there. We looked at 22 different alternatives and it came down to advance treatment.”

“We were the first to adopt it on this size—no one has ever done it at this size before, and also when we started working on this the big thing was that the industry was saying it was too expensive and not really designed to be used on a grand scale,” Farr explains.

“We’ve set a benchmark for cost and since that advanced treatment has sort of exploded around Ontario, North America and around the world, using a lot of the things that we developed as an example. When this project, Lakeview Phase One, started up, it was the largest of its kind in the world.”

In turn, Lakeview has enabled further project development elsewhere, including an even larger facility in San Diego, California. But it all begins here in Peel, where Peel Region Water Treatment’s industry foresight and knowledge, a progressive and supportive local attitude to such projects and the will to truly advance the water treatment industry has ricocheted throughout the world.