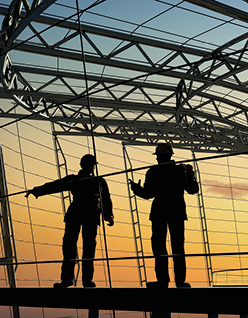 Oakville, Ont.-based Penalta Group Ltd. is a diverse construction management company focused on projects and consultation in both the local and national construction market.

Quite simply, Penalta Group is known for being builders. Never afraid to roll up its sleeves, Penalta Group, though a small- to medium-sized company itself, works with some of Canada’s largest developers. The company is diverse across several aspects of the construction industry, with project involvement in the hospitality, retail, manufacturing, and industrial sectors.

Beginning in 1997, Penalta Group has grown over the years and is now focused on organic growth. With that, Penalta Group also has expansion aspirations, into other sectors and other markets, all with the goal of how best to serve the client. Satisfying this, the company is considering opening offices in Western Canadian provinces, like Alberta and Saskatchewan, where some of Penalta Group’s work has been focused in recent years. Part of this concentration has been with national retail clients and hotels, which has emerged as an area of specialization for Penalta Group.

Terry Wallace, President of Penalta Group, told The Canadian Business Journal, “If our clients are in that marketplace, we want to be in that marketplace servicing them. We have to service the industry one client at a time and grow with the client. They grow their business and then do more work with us.”

Founded on a strong, reliable team, Penalta Group has strengthened itself across all areas, from site management to project management, as well as its internal team in charge of the day-to-day operations.

Penalta Group works closely with the subcontracting sector to provide the best in construction project management, truly dedicated to its clients through the entire construction process. Its open management style promotes a proactive, synergetic approach toward projects, while its robust project management system controls project cost and quality, integrating the best in customer service from project inception through to completion. Wallace added, “We’re training our staff, bringing on our young guns and that’s how we will grow.”

Perhaps no industry has witness more change and development in recent years than the construction world, particularly in Ontario. The provincial economy has taken its toll on the construction sector but fortunately for Penalta Group, its national diversity allowed it to side step the effects of the recent recession.

Working with developers across Canada, Penalta Group in fact grew during the period of economic turmoil.

Although the company specializes in its home province, Penalta Group is a national company that has worked alongside industry-leading developers on several large-scale projects, like big box retail stores for Old Navy, Marshalls, Winners, etc.

“We’re capable of going across Canada, so we don’t say no to projects that are far away,” Wallace said. “Although we still prepare to do work locally, we want to be the go-to company for developers in Ontario, if not Canada-wide.”

Meanwhile, another trend impacting the construction industry has been a worker shortage, particularly in the subtrades. Perhaps this was best highlighted when Penalta Group recently engaged in a project in Thompson, Man., but because of a shortage of qualified trade workers, it had to recruit an electrical subcontractor from faraway Winnipeg, the provincial hub.

And while any construction project will have its share of issues, what is unique about Penalta Group is how it manages these situations to provide the best solutions. Penalta Group is experienced across many sectors of the construction industry and often works in unique ways to assist a client’s market. The company recently launched Penalta TV, completing videos that highlight a project’s construction which can then be used as promotional material.

“We’re always trying to find creative ways to add value,” Wallace summarized. “We’ve developed this cool opportunity, it is very powerful, and I think there is tremendous value in it.”

A charitable organization as well, Penalta Group has worked to raise funds for the development of a Tanzania-based orphanage. The company is very active in this regard in addition to local charities. It has proven to be a very rewarding experience for Penalta Group.

Most recently, Penalta Group is engaged with several large-scale commercial projects, including a $1 million project of a General Motors dealership in its home base of Oakville. The company also has several hotel construction projects in the works, in both Ontario and western provinces such as Saskatchewan and Manitoba.

LEED certification, which recognizes the best in environmental and build green initiatives, was provided to Penalta Group’s construction of a geothermal storage facility in Stouffville, Ont. Penalta Group recognizes the growing industry demand for LEED-rated projects, an area in which the company hopes to do more work in the future.

“People are starting to recognize our brand and that we’re not going anywhere, we’re not fly by night, and we’re in it for the long run,” Wallace concluded. “We want to build our reputation and we want to be known as strong throughout.”