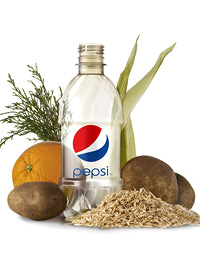 PepsiCo Inc. says it has hit a landmark in renewable packaging, having developed the world’s first PET plastic bottle made entirely from plant-based materials.

“We are very excited about this breakthrough innovation in sustainable packaging, and believe that it will fundamentally change our business’ impact on the environment,” says Denise Lefebvre, Senior Director of Advanced Research at PepsiCo.

Pepsi (NYSE: PEP) said that its new bottle, made from materials such as switch grass, pine bark and corn husks, is made entirely from fully renewable sources and will significantly reduce the carbon footprint of its beverage containers.

“This breakthrough innovation is a transformational development for PepsiCo and the beverage industry, and a direct result of our commitment to research and development,” Pepsi CEO and Chairwoman Indra Nooyi said in a statement.

“PepsiCo is in a unique position, as one of the world’s largest food and beverage businesses, to ultimately source agricultural byproducts from our foods business to manufacture a more environmentally-preferable bottle for our beverages business—a sustainable business model that we believe brings to life the essence of performance with purpose.”

Pepsi will launch pilot production of the bottle next year, with an eye on full-scale commercialization afterwards. The company intends to eventually use agricultural byproducts left over from its food production, such as orange and potato peels and oat hulls, in the recyclable bottles.

Pepsi’s new bottles are the company’s latest advance in the cola cold war. Archrival Coca-Cola Co. unveiled a hybrid plastic bottle, largely made up of petroleum-based materials with as much as 30 percent from plant materials, in 2009.

With this development, PepsiCo continues its leadership position in environmental sustainability and driving progress against the global goals and commitments it announced in 2010 to protect the Earth’s natural resources through innovation and more efficient use of land, energy, water and packaging.