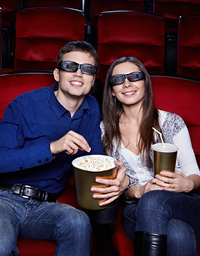 Nestled within a large office tower in the heart of mid-town Toronto resides a hi-tech multimedia company called Percy3D, a creative web services operation that encourages people to create their own movie moment using the latest 3D visual effects and technologies. In a nutshell, the company has built a video personalization platform, which is at the very core of the business. As their catchphrase goes: “put yourself in the picture.”

The founder and president of Percy3D is Julie Steiner, who incorporated the company in April, 2010. She came up with the idea in the latter part of 2008, but it took some months to get everything set up from a business point of view. Steiner recently made a big splash when she hired Richard Freedhoff, Director of Business Development, who leads the daily operations, bringing the total number of full-time staff members to eight, although another employee will soon be added to the mix.

Steiner handles the licencing aspects while Freedhoff takes on the responsibility of branding. His comprehensive insight in the video game, home video, electronics and digital technology industries is exactly what Steiner was looking for. Ironically, the two went to junior high school and high school together but had not seen or heard from one another in many years, until they eventually hooked up once again on LinkedIn where they noticed definite business synergies – and from there they wound up working together.

Where did the name Percy3D originate?

“I was always talking about personalized 3D media, so it got shortened to “Percy”, Steiner laughs. “I often had people ask me if that was my dog’s name.”

To demonstrate what their company is all about, Steiner and her team developed Percy the robot to show computer demonstrations. Other companies would use their brand icon in the place of Percy.

“At the current time we are inserting text or images into either existing content or content that we create for you,” says Steiner. Once created, consumers have the ability to “put themselves in the picture” and share content via social media through clips, e-vites and e-cards.

“Our real differentiator is that our personalizations take place in 3D space, but most importantly this is the same visual effects used in the movies and it’s the kind of thing where the artist will go home and set his computer program to ‘render’ and come back in 12 hours and maybe it’s done,” Steiner states. “We’re turning stuff around in about 60 seconds or less.”

Up until now, everything has been two-dimensional but as Steiner says “we’re an office full of geeks – we like to say we bring the Z – we bring everything into the third dimension.”

The end product is feature-film quality, with Percy3D using the same visual effects software and technology that’s used in motion pictures on the Big Screen.

“Most importantly it’s all about sharing,” she continues. “Everything is equipped with one-touch sharing links. We try to make things extremely easy.”

The Percy3D system is set up for the capability of streaming or downloading if the file is to be kept forever. Currently the system is available in 11 languages and Steiner tells us they are constantly adding more languages to the mix. By the way, there’s also a very robust profanity filter, to ensure exceedingly naughty messages never make it through to the finalized product, and by extension, the recipient.

“Our first contracts were with Paramount and Universal – you can imagine what those negotiations were like when it comes to profanity,” Steiner laughs. “We actually outsourced our profanity filter and use a very robust solution.”

As an official licensee with those film studios Percy3D has access to their full library of movies at their disposal. That said, Steiner says it becomes evident to them very quickly what movie scenes will work well and what ones will not, so they quickly get to know where to look.

Accessing Percy3D is quite simple; set up with an easily integratable API, so connection can be established through a web portal, Facebook campaign, mobile app. – it really doesn’t matter the route you take. The company set out to build a mobile app. that would have all the functionality required and in an entertaining way.

“Really the goal was to have a template for future white label purposes so that it’s simple for consumers and brands,” Steiner remarks.

“Most importantly, we’ve been at this for just a little over two years and we’re a fully formed solution,” Steiner says with respect to the company’s background.

Additionally, the system has been designed with infinite scalability in mind.
“When you catch lightning in a bottle, the last thing you want is for your platform not to be able to support that from happening.”

If you are having a hard time envisioning the final result, imagine watching a favourite movie scene and having the ability to imbed your own personal message right within the frames of the original picture, as seen on screen. For example, there may be a scene where someone is holding up a sign; you can change the text that appears on that sign to read “Happy Birthday Joe” – or something to that effect.

During our visit to the Percy3D offices, we were shown a funny insertion whereby a personalized 3D message was placed in the green Jell-O during a scene from the classic 1978 motion picture comedy National Lampoon’s Animal House, where John Belushi’s character – a slovenly college student named John Blutarsky – was scooping up mountains of assorted foods (presumably to eat) in the school cafeteria and recklessly dumping it onto his tray. Of course, eating was not the main objective of Bluto, as the viewers soon came to realize. A big ball of mashed potatoes wound up being the prop for his impression of an exploding zit (directly from Bluto’s bulging cheeks no less), and much of the rest of the remaining food was launched as ammunition for the epic food fight that followed.

“I’m going to go out on a limb and say this is the only personalized 3D Jell-O message eaten by John Belushi currently on the market,” Steiner smiles.

There are numerous uses for the Percy3D platform. The logical one is licenced properties, but there are also digital invitations, and e-greetings, which Steiner believes her company will be the lead innovators in the next generation of the e-greeting marketplace.

“We love the idea of one-way communication that is personalized to you, branded communication,” Steiner offers. “But then you’ve offered that user who gets the branded communication an opportunity to create their own to send to their friends; just a fun, cool thing, but now they’re extending your branding and of course research shows that’s a much more powerful way to get to a user.”

It comes down to using social media to grow the audience. As of now, Percy3D is focusing on text and images, but the next logical progression would be to allow users to incorporate their own video, but beyond that once 3D display hits a critical mass, whenever that happens, the Percy3D platform can accommodate 3D material. Steiner estimates they may enter the video platform route about a year from now, but a lot will be dependent on market demand.

Working so closely with movie industry giants like Paramount and Universal obviously means Percy3D must always work within the parameters of their licence agreement to uphold the integrity and professionalism one would expect, such as keeping the film itself intact. There are numerous restrictions, but nothing that provides any barriers in terms of building the business. And yes, Percy3D does send the alterations to the film companies for their approval.

“We strip out all music because music licencing is something you don’t want to have to touch,” Steiner reveals. But with a background in the film industry, she has access to some of Canada’s best composers and sound designers.

“In this day and age when multimedia technologies are being applied to marketing strategies as an interactive lead-generation medium, Percy3D is well-positioned to serve as a unique and invaluable source to a variety of clients,” says Freedhoff. “Percy3D technology is built upon the type of movie-worthy visual effects that is attractive to a new mobile audience, so when it’s paired with a company’s own social media campaign the end result is direct and powerfully visual. Currently, Percy3D is the only service that provides such technology to studios and companies with strong branding initiatives and I’m excited to further develop its clientele.”

With more than two decades working in the digital and entertainment realm, Freedhoff’s experience includes growing Sega Canada’s business to $140 million within the first year as Director of Sales. He then joined Sony as Canadian Sales Manager helping to launch PlayStation and achieving more than $150 million in sales in less than two years.

“I started in the video game business and then the last four or five years have been doing a lot of digital and start-up stuff,” Freedhoff tells us. “My background is video games and home video so I knew the studios.”

In addition to Hollywood studios such as Paramount Pictures and Universal Studios, Percy3D also deals directly with several large brand-driven companies in the retail industry. They have a wide range of clients and customers, from the everyday consumer to large corporations. When licencing is involved, the client is the end user, the purchaser, namely entertainment properties.

“We’re close to announcing our first digital invitations and e-greetings rights with a large worldwide kids’ property which has a massive following,” Steiner reveals.

“Anybody with video, whether it’s commercials, trailers or sports footage, we’re able to integrate with their video and do our magic,” Freedhoff adds. “We’re also working with loyalty marketing groups who are sending messages out to people and brands that want to get advertising out in a different way, whether it’s Facebook or direct marketing by email.”

To maximize potential, individuals or companies with the most content will benefit from the services Percy3D has to offer and there are so many markets available.

“It’s almost an embarrassment of riches,” Steiner says. “But that can also be a curse because you’ve really got to maintain focus.”

“It’s about creating consumer advocacy and bringing the customer closer to your brand,” Freedhoff says.

The company platform is patent pending, including powerful software running the system, designed by the company’s systems architect who writes all the code.

“My goal when I started this company was to be the dumbest person in the company and I’ve wildly succeeded,” Steiner jokes. “All of the talent is in house. Our lead artist spent a decade at ILM, George Lucas’s facility. It’s a collection of the best and the brightest here.”