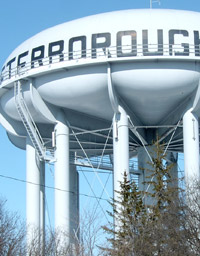 Just like the small, central-eastern Ontario city in which it dwells, Peterborough Utilities Group is an organization with a long and eventful history.

Starting in 1902, the company first purchased the water utility, followed by the electric utility in 1914, and then, in 1975, Peterborough Utilities became the first municipal utility to own a hydraulic power generation station (even before Niagara). In the place where Thomas Edison chose to establish the manufacturing facility for Canadian General Electric, this well-known ‘Electric City’ is the perfect environment for Peterborough Utilities to thrive.

Currently, Peterborough Utilities serves roughly 35,000 electricity customers and 28,000 water customers, and employs about 150 professional staff and skilled tradespeople. While its core business is electricity distribution, potable water production and distribution, and renewable power generation, Peterborough Utilities also has other operations on the go, such as the Riverview Park and Zoo, telecom services, energy equipment rentals and commercial metering services both in Peterborough and other areas of the province.

Focusing on electricity for this article, CBJ had the chance to speak with Jeff Guilbeault and John Wynsma, Vice President Electric Utility and Vice President of Generation and Retail, respectively, to find out what’s happening in their division.

Perhaps the biggest item of news involves the Green Energy Act and what it has meant for Peterborough Utilities’ projects. “Under the Green Energy Act, which was enacted last year, the province set out a 10-step plan for energy conservation, renewable energy development and a local participation,” explains Wynsma.

In response to government incentives, Peterborough Utilities implemented a Feed-In-Tariff (FIT) program, in which the Ontario Power Authority has a guaranteed pricing structure for long-term renewable electricity production. Participants are paid a fixed-price for the electricity they generate, and prices vary according to the source (e.g. solar PV is worth 80.2¢/kWh, windpower is 13.5¢/kWh and waterpower is 13.1¢/kWh, etc.).

“The FIT program is important because having a contract with a provincial entity is key for developers to move ahead with new generation projects,” Wynsma adds. “It has launched a wave of new project applications; in fact, the OPA received applications for over 8,000 megawatts worth of projects—the grid can only accommodate one-third of that. They recently awarded contracts to generate about 2,500 megawatts.”

There are a few projects on the go, but two are worth particular mention. First is the 10MW solar farm, a $40-million project that is under construction and set to be commissioned by March 2011. Once complete, the solar farm will be the first commercial solar farm to be owned by a municipal corporation. The second is a contract for a 2MW landfill gas project that will use methane to generate electricity. Peterborough Utilities expects to earn $1.7 million annually from the landfill project.

“I think Peterborough Utilities is ahead of the curve,” affirms Guilbeault. “And that’s where we want to be, because the sooner you start conservation initiatives, the sooner the successes come. With some of [Wynsma’s] projects, we were in ahead of the rush and were able to secure our contracts. At Peterborough Utilities, we’re well on our way to putting some renewable energy on the grid.”

But it’s not just the utility that has made changes, “the community has jumped on board too,” Guilbeault maintains. “Peterborough is known as a green city too, and we’re proud that we take water and electric conservation very seriously. We have noticed a significant reduction in power usage. It doesn’t affect peak demand, but it affects use per capita. We used to target about 1000 kilowatt hours per residence; now it’s about 800kWh.”

“A good example is when Ontario instituted a requirement for smart electricity meters; Peterborough was an early adopter,” Guilbeault says. “We put the first ones in six years ago. This year, we have embarked on a new program for smart water meters. They will be installed in homes everywhere to promote efficient use of water. We will be the first city in Ontario to have both water and electricity smart meters operating on the same system.”

Thus far, Peterborough Utilities has been able to lead the way because of its enthusiastic residents, its desire for positive change and the cohesive team effort. “Many of us from the development side come from the private sector, which complements guys, like Jeff, who have been on the utility side for quite some time,” says Wynsma. “We have a good mix of management, which enables us to take a measured-risk approach to the way we do things. We understand that utility is risk adverse, but we also understand how to drive profits and take those calculated risks to make projects work.”

If all goes according to plan, the highly skilled Peterborough Utilities team will extend its success well into the future.  “We’re going to continue to leverage our organizational expertise,” adds Guilbeault. “We have great people here and our long history of innovation is instilled in the culture of our utility. Our goals for the utility are to maximise the return on our regulated utility operations and expand our water and wastewater operations.”

“On the generation side,” concludes Wynsma, “our objective is to continue to have measured growth in the development of green energy projects and to become the leading municipally owned renewable generator in the province. We’re not far from that, and if we continue to grow at the pace we’re at now, we can achieve that within five years.”