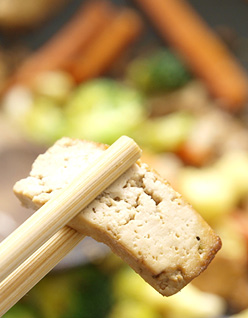 In 1975, when PH Food founder Jason Koo met with the first soy bean farmer employed by the Ontario-based food manufacturing company, the farmer, used to seeing his soy used for fuel and animal feed, asked, when told it would be used for tofu, “What is tofu?”

A lot of time has passed since 1975, and a lot has changed in the Ontario food market. Not only has the consumer base grown and diversified significantly to include a mirage of ethnicities, but traditionally Asian foods—such as tofu—have been embraced by the mainstream.

Immediately, PH Food found its niche in health-conscious and Asian markets, and was met with large demand for the company’s tofu-based food products, such as traditional dishes such as dumplings, rice cakes and noodles.

For many years, focusing on the Asian market around the Greater Toronto Area sustained the company, Toronto’s largest minority group. PH Food built a reputation for authentic, quality recipes and developed a proud heritage of delivering on taste and freshness with Canadian-grown ingredients.
In 2008, Jason handed the reins to his son John Koo and moved the company to a new warehouse in North Toronto, four times the size of the previous facility.

John’s ambitions, to broaden the PH Food profile, has brought the company from smaller, Asian markets to the shelves of Canada’s biggest superstores, capitalizing on the consumer desire for variety and healthier protein alternatives.

PH Food has developed a line of delicious and safe organic foods, with soy beans that are certified organic, free of pesticides and herbicides, with no artificial preservatives, colouring, or flavours.

In fact, according to Eat Right Ontario, “Tofu is an excellent low fat meat alternative; providing protein, fibre, B vitamins and iron. That is why Canada’s Food Guide recommends we include soy products in our daily diet.”

Since 2008, John has broadened PH Food’s distribution profile significantly. Where the niche Asian market once comprised 90 per cent of the company’s distribution, today that same volume represents 40 per cent. PH Food can now be found at national food stores such as Whole Foods, No Frills, Walmart, Rabba Fine Foods, Pusateri’s, and Sobeys.

PH Food remains committed to bringing its customers a wide variety of healthy and delicious products.

“Fresh local ingredients are used to make our products, with a great staff that understands the importance of delivering the highest quality of foods. Though our methods of production have changed over the years, we maintain the same passion and dedication to quality that was the basis of this company from the beginning,” says Koo.

“When I started, my goal was to venture out to mainstream markets,” says Koo. “When we first moved into our current facility, it was pretty rough time for everybody because of the recession but we still managed to raise sales 20 per cent in that time.”

Broadening distribution has been the biggest key to PH Food second chapter. “There was little decrease in our Asian market but a huge increase in the markets that we were venturing to.”

“We received new machinery in from Korea where right now we are fully automatic and we can supply almost any demand at this moment,” says Koo.

With solid footing in the Canadian market, Koo’s biggest challenge lies ahead. PH Food is in the process of receiving federal licensing which would allow worldwide distribution of PH Food products. With distribution hubs set up in Chicago and Vancouver, Koo’s sight is set firmly on the Asian and Central American markets first.

PH Food has seen a 180 in the Canadian soy-based food market since the day that farmer asked “What is tofu?”

“Today, not only do our customers know our foods,” says Koo, “they pronounce the name in perfect Korean pronunciation.”