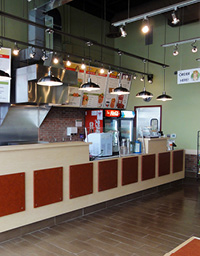 Good ideas are common—what are uncommon are people who have the vision and drive to bring them to fruition. It’s pretty ingenious, really, yet prior to the first Pita Pit opening, there was very little choice for fast, fresh and delicious food in the quick service market.

Fun, fast, fresh and healthy, Pita Pit offered delicious pitas with vegetables and lean meats. Almost instantly, Nelson Lang and John Sotiriadis, co-founders of Pita Pit, knew they had hit on something special when they opened their first Pita Pit in Kingston, Ont., with its large student population the perfect built-in focus group: hungry and cash-strapped.

Customers who came initially for the price point returned for the fresh and healthy foods. Sotiriadis and Lang saw the momentum they were building, and franchised out their first restaurants. Lang and Sotiriadis know what brought them—and you—to the table, and that is pitas. They do pitas best and were the first quick-service restaurant to build its business around pitas filled with lean meats, vegetables and garnishes and settle into its place in the market where healthy and delicious meets affordability.

Today, Pita Pit is one of Canada’s most successful restaurant chains, with more than 300 locations in Canada, the United States and internationally. For three years in a row, Pita Pit has been ranked on Entrepreneur Magazine’s “Franchise 500” list. For two years consecutively, the company has been on the Inc. 5000 list of fastest-growing private companies as well as Restaurant Business magazine’s “Future 50” list.

“In 1995 our goal was to build one store a year for 10 years, all in the Ontario area,” reflects Lang, “and then the interest started to pop up, and we are in over 300 locations.”

With more than 300 locations, it’s hard to imagine that the Pita Pit team still knows all its operators by name, but they see the business as an extension of their family, considering the 10-year commitment made by operators, and the constant communication that is kept between them and head office.

“The idea was a fantastic concept,” says Doug Fisher, Pita Pit’s first operator, when asked what drew him to open his restaurant in Peterborough in 1997. Fisher signed his second 10-year lease almost four years ago. “Things were going well for me. I thought they were doing a great job and are actually doing a better job right now than ever before.”

Pita Pit’s goal is to turn a business transaction into a customer interaction. “We have some operators that do such a phenomenal job,” says Chris Fountain, CEO. “We used to joke around with Nelson’s barbecue test: would I like to have this person over for a barbecue? Aside from that, they look for franchisees with the vision and passion for success before all things. We’ve put in place a system that is a simple concept to run, we need someone who has a good head on their shoulders and is willing to put in the work.

“Obviously you want someone with a bit of financial strength, though the liquidity requirements are not as big as they used to be. We can open a store turn-key for about $200,000—and quickly—we typically say 90 days is our fast track from the day we get application to opening day."

The majority of Pita Pit’s expansion comes organically—the great majority of owners being customers who have come in, eaten a pita, and spoken with an owner. “People love the brand, so it makes it an easy pick when you have someone who is already enthusiastic,” says Fountain.

Formally known as a university-type eatery, but Pita Pit has worked hard to expand that impression and now its stores enjoy regular customers from all walks of life. Pita Pit now has three times the locations in non-university markets, with a substantial portion of its business now catering to elementary and high schools, and even senior citizens.

“Our demographic is now six to 65, as everyone is interested in eating healthy and all ages enjoy our product,” says Fountain. “It is part of our growth strategy that has really helped because the students grew up on it first and now they have entered the workforce,” says Fountain. Recession-protected, he says in the downturn, store sales in 2008 to 2010 rose at an average of four per cent each year, something he contributes to the movement toward eating healthier food without sacrificing convenience. Expanding their offerings to include smoothies and a smaller potion option–the Petita—also brought in more customers during the recession.

Numbers from the Canadian Restaurant and Foodservices Association suggest that limited-service restaurants will lead the commercial food service industry with average annual real growth of 1.3 per cent between 2011 and 2014, because of its focus on convenience and value. Pita Pit’s prescience earned them a seat amongst Canada’s best food service chain.