Home | Features | May 12 | Pizza Nova – a Model of Franchising Success 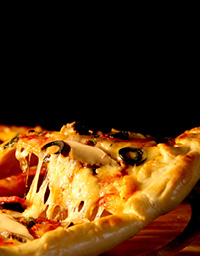 For almost half a century, Pizza Nova has been a successful Canadian franchise and it continues to grow with each passing year.

It all began in 1963 when the Primucci family opened the first location in Scarborough, in the eastern section of Toronto.  There are now more than 130 locations.  In the United States there are outlets in New Jersey and Florida and expansion has moved as far south as Cuba.

As President of Pizza Nova, Domenic Primucci is the man now in charge of day-to-day operations with the retirement of his father Sam and his brothers.  Primucci is married and has children of his own, but they are still in school and still a number of years away from perhaps joining their father in the family business.

“It began as a single full-service restaurant and grew from there,” Primucci tells us.  “There were maybe seven or eight of them and then the focus was more on the takeout and delivery with limited seating but not serviced.”

Primucci says the company is always aggressively looking for new locations to enhance market share and believes there are still a number of excellent markets with which to serve.

In Ontario, Pizza Nova goes as far north as Huntsville, Peterborough to the east; Kitchener-Waterloo to the west; and Hamilton to the south.  Inside that perimeter are a large number of stores in the Greater Toronto Area.  In other words, Primucci has coverage throughout the most densely populated area in Canada.  What about plans for expanding into other provinces?

“If the opportunity arises we are open for discussion in looking at it, but we also know there is a lot of room to grow in our current market.”

One of the key marketing successes for Pizza Nova has been the consistency in driving home the brand name with the very recognizable catchy theme music heard on their radio advertisements.  But Primucci reveals there was a time that wasn’t the case.

“It’s been there a very long time, you’re absolutely right – but we have strayed from it,” he laughs.   “Over the years it’s the jingle we’ve used many, many times but we’ve tried three or four other jingles.  The last time we did that would have been about 10 years ago, which was more jazzy. But people would come up to me and still be singing the old jingle, not the one that was currently on the air.  That’s when we realized we had something with the older jingle and decided to forget about making those new ones.”

So the jingle remains the same, but the message from Primucci is what changes with each new commercial.  It was decided to add his voice to the commercials about seven years ago – and there’s no mistaking that distinctive baritone sound.  Primucci says the goal of each commercial spot is to tell a unique story about a certain product and its quality.

“We’ve had great response with it,” Primucci states.  “I just tell a different message every so often about family, tradition and quality rather than talking about price, because there’s always going to be someone cheaper – so it’s best to tell a good story.”

Interaction between the successful franchisor and franchisee requires almost constant communication in one form or another.  There’s the inherent need to always be on the same corporate page with quality and consistency always being the key factors.

“We have seven district managers that are on the road day in and day out visiting the franchisees and ensuring the quality of the product and service is up to standards,” Primucci notes.  There is also a call centre where the orders are taken in for the stores and the constant interaction there.

Primucci assembles a conference four times a year with each of the franchisees, which takes a good part of the day to talk about what’s happening in the industry and anything that needs to be addressed.

“One of those is an overnight conference where we get together and invite the families of the franchisees and so we’ll have a meeting during the day with different themes and guest speakers as well as training sessions if there are areas we feel we need to work on.  In the evening, in front of their families, we have a gala awards night and this way we recognize some of our top franchisees.”

Given that franchisees can spend so much time at work, it’s not uncommon for many of them not to be able to spend as much family time together as they might like.  That dedication and commitment to success is something not lost on Primucci.

With Pizza Nova being such a successful enterprise, the company is approached on a regular basis by members of the public looking to obtain a franchise.  But to ensure the high quality set out by the food chain, Primucci says there is a process in place to determine those individuals that would likely make for the best fit with this type of franchise system.  It’s the franchise directors who do much of the pre-screening of applications and then carry out several interviews of prospective buyers.  The company also has an aptitude test developed from a third-party source, which helps determine if a certain individual is cut out for franchising in general.  If an interested party gets through the initial testing, the next stage is a meeting with the director of operations and the district manager to see if there’s a good fit.

The hard work of Primucci, his executive staff and the franchisees resulted in Pizza Nova being honoured with the Canadian Franchise Association’s Awards of Excellence Grand Prize during the national convention, which was held in Niagara Falls.

“That was fantastic,” Primucci gushes.  “A lot of times you know beforehand if you’re getting an award but at this event you really don’t know.  They have a franchisee choice designation certificate and we were told we’d be getting one of those.  There are four categories and we won the gold in our category, and then the Grand Prize award is given to one of those four winners and we were chosen this year. “

“Our table roared because we were so happy,” Primucci says.  “They do it like the Academy Awards – they open up an envelope and announce the name.”

Primucci made his unexpected acceptance speech and took the time to thank all his staff, but most of all the franchisees themselves, who have been the cornerstone in making the company such a big success.

“I dedicated the win to them because it really shows a lot of hard work that has been done at the franchisee level and we were really ecstatic about it and we’re number one for this year.”

With such intense competition in the fast-food industry, a number of enterprises have attempted to branch off away from their core menus in order to attract a wider demographic of people in tracking down other market specialities.  It’s a business practice that can be successful, but it also can be a colossal failure.  From Primucci’s standpoint, he prefers his company sticks with doing what it knows best.

“I definitely believe in keeping core values and quality control,” he confirms.   “Yes, we’ve expanded our menu as well but we’ve done it in our core focus.  We introduced Italian sandwiches – not every type of sandwich.”

Further to that, Primucci and Pizza Nova just recently introduced a new item to the menu lineup called focaccia baresi.  It’s a product Primucci has been able to secure the rights for in order to make here in Canada from the consortium in Bari, Italy and the European Union.

Focaccia has been in existence much longer than pizza and originates from the early 1800s and comes in a variety of sizes and tastes.  Focaccia Barese is a trademarked name now used by Pizza Nova.

“It’s a great complement to our lineup,” Primucci says.  “We received the IGP designation meaning the product is protected by the region in how it’s made, including the ingredients used.  It complements our menu with any great tasting product.”

The acronym IGP stands for “Indicazione Geografica Protetta” or “Protected Geographical Indication” in English.  This designation is accredited proof that a food or agricultural product has been produced within a specified geographical region in a manner consistent with the qualities established by the Italian rating system.

“I think by keeping things to the core, our customers will understand who we are,” Primucci says.  “We do have a lot of loyal customers so anything that we do bring out, it goes through stringent testing because the customers appreciate the quality we attain and so anything new has to reach that same level.”