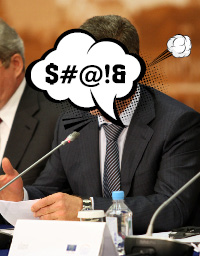 “We’re in safe hands with Stephen Harper,” the subtle background voice profoundly states. “With so much at stake, why would we risk changing course?”
The above, of course, is the television commercial advocating Canadian Prime Minister Stephen Harper. But what is particularly unique is that it is the only positive ad to regularly occupy the airwaves.

It is alone among its advertising companions in support of Canada’s incumbent. All other regular advertising founded by the Conservatives in broadcast form, structures on the negative,  focusing on Liberal bashing, if not the occasional New Democratic slag.

On the Conservatives’ official web page, six posted television ads inform viewers of Conservative initiatives, though only one ad carries a positive tone. The other five ads are a combination of negative campaigning aimed toward the Liberal and New Democratic parties.

“There is uncertainty in the world. Our economy recovery is still fragile. That’s why we can’t stop working to create new jobs, to save existing jobs, to help those who need it most,” continues Harper’s positive ad, a stark contrast from the other campaign commercials.

Surely you’ve heard them before. Michael Ignatieff, the “anti-Canadian” leader of the opposition, who referred to himself as an American; who considers himself a “tax and spend Liberal”; who irresponsibly planned for a reckless coalition, not to mention that he didn’t come back for you. “He did it before, he’ll do it again”, concludes the anti-Liberal, pro-Conservative ad.

Says the anti-NDP ad, “Ambition can be blind. So desperate for power, [NDP leader] Jack Layton was willing to make [Bloc Québécois leader] Gilles Duceppe the driving force of a coalition government. He did it before, he’ll do it again…and Canada will pay the price.”

“For negative ads to work, it has to appeal to some sense that the audience already has. It has to meet some perception in the audience that already exists, and then exaggerate it,” Walkom emphasizes. “The negative ad has to build on something that people may believe is possible…and if it’s well done then a negative ad can really be quite effective.”

“You’ll notice right now that one of the Conservative ads is kind of an Uncle Stephen ad. It is not negative all. It’s Harper with his glasses on, looking somewhat like a friendly accountant,” Walkom adds. “He’s not smiling, he’s at his desk, by himself, working away and the connotation that you’re supposed to take away from this is that, ‘Here’s this guy. He’s not necessarily Mr. Personality, but he’s working on your behalf, late at night, doing good for the country.”

And the lone positive ad may have the best touch of all, continuing, “Canada is rising to the challenge, cutting taxes, increasing benefits, investing in roads, buildings, and infrastructure…slowly, surely we’re turning the corner. Canada is stronger, prouder, and walking tall in the world.”

Walkom concludes, “Negative advertising is only one part of the mix. The portion that is negative depends very much on the political culture of the audience—what they’re willing to accept.”