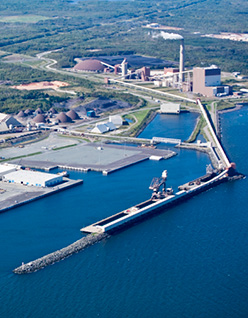 Located on some of the shortest shipping routes between Europe, North America and Arctic markets, and home to the country’s most modern terminals, New Brunswick’s Port of Belledune, plays a vital role in the Atlantic Canadian economy, facilitating shipping companies from around the world with importing and exporting goods year round.

Initially built to accommodate various industries in the north shore of the province, notably Xstrata’s Norand Smelter and the New Brunswick Power facility, three major expansions to the port—one in 1997, again in 1998 and the latest just this year—the port is part of  the foundation of the local economy, with significant advantages to potential shippers and importers.

Terminal I, currently under a long-term lease, is used mainly for the import and export of mineral concentrates, sulphuric acid, and liquid petroleum cargoes.

Terminal II, built for the NB Power 450 megawatt generating station, can handle Capesize vessels up to 100,000 DWT. Terminal III, the M.D. Young Terminal, was built with the shipping community in mind, offering flexible services to shippers from all over the world. It directly links to connected highway and rail networks, accessing over 20 million customers within a day’s haul.

“Many economic factors make shipping through Belledune a very attractive option. More ships are now available, costs are lower and we are ideally situated to respond to shipping needs,” says Rayburn Doucett, President & CEO of the Belledune Port Authority, who, along with his team, celebrated the completion of a $80 million expansion to the port this fall.

“The port’s expansion enhances its operating and competitive capabilities,” continues Doucett. The key piece of the expansion is the $13.2 million modular component fabrication facility, a 40,000 square foot space with 28 welding stations and two overhead bridge cranes. This facility helps to make the Port of Belledune one of the best ports in Atlantic Canada and ideal for the increased demand for low-cost modular fabrication construction locations in ice-free, deep-water ports.

The Port Authority aligns the port’s tremendous new facilities and its strategic location with potential new clients. The ambitious expansion, recently completed, makes the port capable of handling “just about any” ship and type of cargo, with funding from all three levels of government.

“Our government is focused on investing in strategic projects that will grow and develop the Canadian economy in every region of our country,” says the Honourable Keith Ashfield, Minister of National Revenue. “By investing in the Port of Belledune, we are showing a commitment to the future prosperity of the people of Northern New Brunswick.”

The port has experienced steady growth, with profits rising from $175,000 to over $3 million within a decade and a record numbers of vessels calling on the Port of Belledune. “We have windmills coming in the last two years as well as larger units such as mobile homes and trailers that are shipped out to go up north; large tanks shipped out to go into construction sites in the north and a lot of other special project cargo. “Additionally, lumber, gypsum, wood pellets, and many other bulk products are imported and exported through the Port of Belledune on a regular basis,” says Doucett.

“It’s a very active bulk port; it’s a spacious port with an incredibly large amount of land. To add to what was already a spacious and flexible facility, the Port Authority recently purchased another 1,400 acres, giving the port over 1,600 acres of usable land surrounding the port terminals.”

The $25 billion shipbuilding contract recently awarded to Halifax’s Irving Shipbuilding Ltd. will likely impact the Port of Belledune, ideally situated to do satellite work on the contract, and has ample space—650 hectares of land surrounding the port terminals—to layout the huge ship pieces.

“I think [the contract] will bring us some indirect business,” says Doucett. “I hope some of the companies will use our facilities. We have some of the best facilities—by far the newest facilities in Canada—and I don’t believe they can do it all in one place, for example, because of the sheer size.”

“We are very pleased Irving Shipbuilding based in Halifax won that contract and we would be very pleased if the companies doing work with this contract would rent our facilities and use our barge terminal to bring in and ship products out.”

The Belledune Port Authority is also working to increase its profile as a port for the growing mining industry in the arctic.

“We are going after a lot of business in the Arctic—a lot of the mines in the Arctic will be needing a lot of products and Belledune, with our location and infrastructure is one of the best ports to service the Arctic—we are going to do everything we can.”

The Port of Belledune offers a longer shipping season to northern regions while providing a congestion-free port. The intermodal accessibility makes bringing cargo from any interior market possible; the efficiency of the stevedores, tugs and equipment operators makes shipping from Belledune more than ideal.