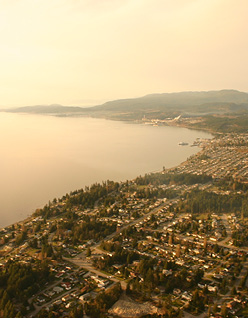 Located 135 kilometres north of Vancouver on the Sunshine Coast, the Powell River Region offers a wonderful mixture of nature, culture and industry. Set on the shores of the Pacific Ocean with stunning mountain ranges as a backdrop, the community has a full range of urban amenities and has become a hotspot for businesses, families and retirees relocating from centres across North America and the world.

Powell River offers comparable amenities to British Columbia’s major cities as well as a diverse economic base. Home to one of North America’s largest paper industries, employing more than 3,500 workers during its peak years, the local economy has developed and expanded in recent years in an effort to provide more economic stability. While still home to a major paper manufacturing base, the industry is not as locally dominant as it once was, nor is the region as reliant on its forestry and resource extraction sectors.

The region is also known for its history with mining – nearby Texada Island is the site of former mining and logging areas and still operates a large limestone quarry with annual output levels ranging from 3 million to 5 million product tonnes. Because of the region’s proximity to Vancouver, Texada has also recently become a hub for transshipping other minerals and coal volumes.

Similarly, the local aquaculture sector is expanding in Powell River. Plenty of economic investment has come from border state Washington-based Taylor Shellfish Farms, which has invested more than $3 million in local operations producing mussels, clams, and oysters for both international export and domestic consumption.

The food production sector is intriguing for Powell River. Scott Randolph, Manager of the Powell River Regional Economic Development Society, commented, “It is an industry that has a very bright future and, because of our geographic location, affordable lands, access to salt and fresh water, cheaper electricity, and with the skill level we have on the ground, I think we’re well positioned to attract investment [in the food production sector].”

In 2005, the City of Powell River took the lead in British Columbia in significantly reducing Major Industrial tax rates, in order to ensure the financial viability of Catalyst Paper’s paper operations in the community. Over seven years, Catalyst has realized $18 million in savings as a result of the move and in return has made significant capital investments in upgrading its mill and transferring ownership of key pieces of surplus properties to the City for the purposes of redevelopment.

In light of its bold approach on major industrial tax rates, the City of Powell River is open to implementing tax revitalization bylaws as an incentive for business developments that provide new jobs and revenues. “Not only does the City have the advantage of having a good inventory of some of the most affordable lands in the province, it is also willing to work with investors to provide a graduated approach to property taxes to assist in establishing operations in the community,” said Dave Formosa, Mayor of the City of Powell.

The Powell River Region has a strong history of creating innovative partnerships to move projects forward for the betterment of the community.

In 2006, Plutonic Power Corporation (now Alterra Power Inc.) began construction on two run of the river hydro generating stations just north of the City at Toba and Montrose Creeks, as well as transmission infrastructure south to Saltery Bay. Powell River helped the billion dollar green energy project to be a success in a number of ways, but probably the most impressive was the dual credit trades training programs that were developed ahead of construction to fill labour needs and provide economic development opportunities for local First Nations.

“School District 47 and the Powell River Campus of Vancouver Island University partnered with the company to create trades training programs whereby students entering Grade 10 are able to garner both secondary and post-secondary credits at the same time,” Randolph said. “By the time they graduate in Grade 12, they are red sealed certified and ready to enter the workforce.” Randolph noted that the programs are the first of their kind in the province and many other School Districts have been working on adopting them.

Another good example of the innovative partnerships in the community is the Limited Partnership company that was formed by the City of Powell River, Sliammon First Nation and Catalyst Paper Corporation. PRSC Limited Partnership was established to take ownership of about 800 acres of surplus lands from Catalyst to be sold and redeveloped for the purposes of creating new jobs and tax revenue. Randolph reported that more than half of the lands have been sold to date, and interest in the remaining properties has increased recently due to increased investment in the food production sector.

“These two examples of innovative partnerships is just the tip of the iceberg in Powell River,” said Mayor Formosa, who led the charge to found the Limited Partnership. “This is a community that works together at all levels to get things done. I believe it’s our spirit of cooperation that really creates an environment for success.”

Economically, the recent economic downturn of the recession was delayed in Powell River, as an ongoing construction project of Alterra Power kept the local economic base steady during the financial crisis. During this time, the region continued to reap the investment benefits of the Alterra Power project. Randolph noted that the community will receive another infusion of investment in the Green Energy sector in the near future as Alterra moves forward on two more run of the river hydro sites in the near future.

However, in its local residential sector, like any community, Powell River experienced a price slide, with housing values down about 15 per cent, although this figure was mostly offset with the demand from urban buyers looking to relocate to the smaller community of Powell River. Professionals from Vancouver, a 25-minute flight from Powell River, were dealing their houses in the city for large figures, ranging from $700,000 to more than $1 million, and picking up a smaller-sized home in Powell River in the $250,000 range.

“Prior to the economic downturn, per capita we were one of the hottest markets in the province,” said Mayor Formosa.

Moving forward, Powell River recognizes the need to continue building on its budding economic base. Markets are progressing and investment capital is becoming more available. Formosa concluded, “We still have some work to do. We want to have a well-balanced economy that provides a good amount of jobs for both young and old and to ensure that we won’t be the victim of a single employer in the future like a lot of rural B.C. communities.”