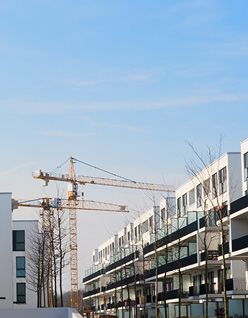 Incorporated in 1980, Power Drywall is a highly sought after, fully integrated contractor for the residential, commercial, institutional and industrial construction segments in British Columbia. One of the leading full-service drywall contracting firms in the province, Power Drywall, for its expertise and craftsmanship, has been chosen to construct many of the province’s high profile buildings and projects.

In the August, 2009, issue of The Canadian Business Journal, Vic Semenov, General Manager of Power Drywall described how Power Drywall became leaders in their field.

“From the very beginning, our strategy for market entry was differentiated,” he said. “Instead of going out into the marketplace and selling ourselves to anyone, we chose to focus on certain clientele. Our customers became a small group of qualified main players in the construction industry. Once confirming a successful bid, we would concentrate on providing the best possible service to those clients.

Loosely based on the retail industry, our motto has always included the understanding that If customers aren’t pleased with service and quality, they will shop elsewhere.”

By remaining stalwart to this principle, Power Drywall not only weathered the global economic downturn (which resulted in a slower construction industry), but thrived through it. Power Drywall is a silent partner in many high-profile construction projects, and is experiencing one of its most successful years to date.

We met up with Semenov this year and discovered that Power Drywall’s strategic diversification has propelled the company since we last spoke.

“In the past few years since the market contracted and became very competitive, Power Drywall has begun a process of diversification into different segments including, for example, cold formed load bearing steel stud structures—a somewhat modularized, more sustainable approach  to constructing buildings that reach as high as 10 storeys,” says Semenov.

“This diversification is a result of the growth and expansion strategies of the company,” he continues. “An idle company will often plateau and, as a result, suffer the effects of “status quo”.  This ultimately leads to stagnation. Growth has to continue.  An organization has to continuously scan the environment for opportunities and threats that may lead to an adjustment of its strategies,” he insists.  “We continue to research and develop products and processes that address the dynamics of our chosen industry”.  This he tells us, continues to be the basis of the Power Drywall strategy since its incorporation more than 30 years ago.

Despite its fervour for growth and expansion, Power Drywall has taken a somewhat cautious approach to new market entry over the last two to three years. “Yes, it has been a slow development process.  It has not just occurred in the last few months, instead it’s been implemented, in a slow but steady pace.”
Power Drywall is now poised to capitalize on a rebounding market with increased construction.

Power Drywall’s answer to the forecasted housing demand includes the interests of both the home buyer and the municipality.  The mid-rise homes (buildings) that Power offers is an “alternative solution”  to the unpopular, controversial suburban sky-scraper type condominium building.  “We recognize the need for densification and at the same time we understand the public’s dislike for tall sun-shading buildings.”   This was Power Drywall’s motivation to offer this new innovative system.

“The main advantage to this system is based on the 4-E principal: Efficient, Effective, Expedient and Economical”.  It is efficient, in that it is an engineered lightweight system,  it is effective in that it can be used in any condition, it is expedient in that it is quick to construct, and above all economical in that it is most often 30 per cent more cost effective than conventional concrete systems.” says Semenov.

Never far from its roots

That is not to say that Power Drywall has diversified away from its root, core offering.  Albeit under the same ownership, Power Drywall and Power Wall Systems are structured as separate business units.  Power Drywall continues to be best known for its expertise in steel stud framing, drywall installation, insulation and architectural acoustical ceilings, as evidenced by its past and present accomplishments at the University of British Columbia (UBC).”

One such project is the UBC Pharmaceutical Sciences Building, a $133-million building boasting the second largest infrastructure investment to a single UBC structure. “Built to LEED gold certification standards, the six-storey, 22,871-sq.-metre building will accommodate the expansion of the faculty’s undergraduate and graduate programs and help address the shortage of pharmacists in B.C, according to UBC.

“Power Drywall’s relationship with UBC goes back 15 years,” says Semenov. We find that we are being involved more frequently and to a higher extent because of this relationship, coupled of course with the magnitude of the university’s projects.”

UBC, like all Power Drywall clients, relies on the organization for expert workmanship, its focus on schedule requirements and its fair market pricing strategy.  These traits have favourably positioned Power Drywall   for the upcoming cycle, which includes a forecasted 20 percent growth in revenue year over year.

“Our population growth together with the federal and provincial government assessment and review of immigration laws, has given us cause to believe that BC will be increasing its budget for expenditures in the construction industry for residential development,” says Semenov. “And we will gladly be here with our products, to supply that demand.”