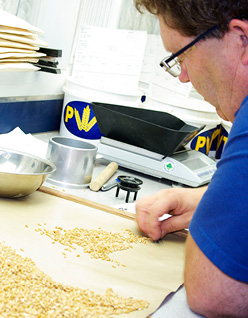 Grain Handling from Seed to Sale

Located in West Central Saskatchewan, Prairie West Terminal (PWT) started as a joint venture in 1998 with just 10 employees but is now 100 per cent producer-owned and has grown to employ about 30 people. While the company does not consider itself a large player, PWT has a head office and concrete terminal located between the villages of Dodsland and Plenty, Sask., as well as four additional grain handling facilities in the towns of Plenty, Dodsland, Luseland, and Kindersley. With more than 78,000 metric tonnes of storage (2.8 million bushels) the company handles around 420,000 metric tonnes (15 million bushels) of grain a year.

Prairie West Terminal serves as a handling agent, purchasing grain from the producers, distributing it across Canada to ports in Vancouver, Thunder Bay, Prince Rupert, and Churchill, as well as selling directly overseas. PWT primarily handles wheat, durum, canola, and barley, but continues to expand and grow into new markets, buying and selling commodities such as peas, lentils, and flaxseed.

Chad Campbell, CEO of Prairie West Terminal, told The Canadian Business Journal, “We buy the grain directly from the producers, and as an independent handler, we focus on providing a personal service to the producers. In the past we have been a handling agent for the Canadian Wheat Board (CWB), but the Wheat Board is losing its monopoly starting August 1. This being said, the smaller, independent terminals such as ourselves have a definite advantage going forward.”

To better serve the producers and clients, Prairie West Terminal holds stakes in sundry businesses such as logistic and port facilities which has allowed the company to remain profitable while still providing a strong dividend for the shareholders and good return for the producers. With a stake in GNP Grain Source – a company that manages PWT’s rail and port logistics for grain shipping – it helps to effectively and efficiently manage the schedules for railcars and shipping vessels. With the partnership for grain logistics, it also reduces problematic and time consuming milestones that can arise while shipping, which therefore allows PWT the capability of assuring the client that the product will arrive as scheduled.

Along with the buying and selling of grain from the producers, Prairie West Terminal also supports the farmers through continuous communication about the grain market(s) and providing crop support. The company provides a number of Crop Input services such as seed and fertilizer, soil testing, and agronomic advice on farm supplies. As well, it offers marketing advice and grain sampling which gives the producers an estimate on the grading of the grain and how much it may be worth.

“We build very personal relationships with the producers and create a level of trust. While our profits come from the grain handling fees, we maintain our relationships by providing producers with advice on how to maximize crop returns. We provide as much value-added service as we can!”