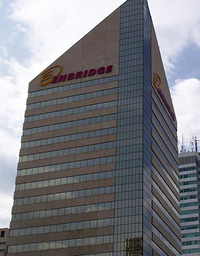 When it comes to having a presence on the international scene, it’s quite likely that Canada’s natural resources industry has greater notoriety than any of our other domestic business sectors worldwide. Many developing economies with increasing energy demand – such as China – are now looking to Canada as a potential supplier for their growing energy requirements. We have been blessed with a plethora of assets – many as yet untapped – however, there remain numerous domestic and international legalities to sort out before we can hope to reap the full potential of this economic windfall sitting in our own backyard.

Al Monaco has been with Enbridge since 1995 and was appointed president on February 27 of this year. During a recent business luncheon in downtown Toronto at the Board of Trade, Monaco provided an update on a number of contentious global energy issues facing his company and the industry as a whole, and provided his perspective on how Canada can successfully navigate the changing energy scene.

The three main business areas that Enbridge focuses directly upon include: crude oil pipelines, natural gas distribution and green energy. The company has about 6,000 employees working primarily in Canada and the U.S. and has been in existence for 63 years, getting its start as the Interprovincial Pipe Line (IPL) in 1949.

There are a number of energy matters of national interest being discussed by industry, policymakers, pundits and everyday citizens, keen on knowing just where this type of business enterprise is heading and the effects it will have on the Canadian economy and the ecological environmental ramifications. Gasoline prices, oil sands development, fracking and pipelines are some of the top trending topics. Fracking, if you are unaware of the term, is a technique that involves the injection of millions of litres of water and various chemicals underground at high pressure in order to create fractures in the underlying rock formations, creating an ability to extract the natural gas below the earth’s surface. Those opposed to this practice are most concerned by the carbon emissions given off during the process.

“More recently the impact of resource development on the Canadian economy, which is being framed these days as ‘Dutch disease’ is also an important issue; however, the one subject I find most consequential of all is the rapid and dramatic shift underway right now in the world energy markets,” Monaco says.

Despite a recent slowdown, precipitated largely by the global economic woes faced by many developed and developing nations, many industry
experts including Monaco believe that future international growth will be driven by emerging markets such as China and other nations in the Asia-Pacific as opposed to the United States and Europe, as has been the case in the past.

“In terms of supply and energy, North America will become the fastest oil and gas supply region in the world,” Monaco notes. “That’s a 180-degree shift from previous years.”

If this all comes about as expected, these wide swings in consumption and supply will represent the most significant development in the global energy market for many years to come. But there are no shortage of obstacles standing in the way before much of it can transpire.

“These new realities drive what I believe is a strategic imperative for our country – which is the need to diversify its energy markets,” Monaco reveals. “In order to diversify our markets, it will require new infrastructure at a time when there seems to be opposition to any and all energy projects.”

Oil and gas are the largest single exports coming out of Canada and yet it’s been widely acknowledged we’ve been selling our resources to international customers at a severe discount, primarily because we don’t have the necessary infrastructure to reach many international markets much beyond our largest trading partner – the United States.

“The discount equates to billions of dollars in lost revenues, and as Canadians we should be very concerned about that because energy is a critical component with our growth outlook and stability in this country,” Monaco asserts. “At the personal level it hits us all through jobs, standard of living and building our social safety net that we want in this country. If we don’t move quickly to access new markets, Canada risks missing a golden opportunity to forge greater economic development; and if we don’t move quickly, others are going to fill the gap.”

The main focus for Enbridge is to connect supply with growing markets, which is done through a network of pipelines to eastern Canada and the U.S. including the mid-continent, the Gulf Coast and the mid-west. The company delivers more than 2 million barrels of oil per day to those markets, which represents about 60 per cent of U.S.-bound oil from Canada. By extension, it comes as no surprise that Canada is the largest supplier of oil heading into the U.S., accounting for about 13 per cent of their total imports. It’s a number that isn’t expected to increase.

“U.S. oil consumption will likely be flat at best,” Monaco says. “It’s due to slower growth, fuel efficiency and demographic changes that mean less miles driven.”
On the supply side of the equation, the global shale gas revolution is now well understood.

“Natural gas is no longer viewed as simply a medium-term transition fuel to hold us over until renewables kick in; it’s now critical to meeting longer-term global energy demand.”

Industry experts agree that gas will be a key fuel source for the future. It’s abundant, responsive to demand, relatively low in emissions and it’s cost effective to site in that it can be positioned new load centres.

Monaco believes the real game changer is the growing level of North American oil production and by extension able to reduce overseas imports. This has been made possible largely due to improved technology that allows access to resources that were previously out of reach.

“The fact is technology has unlocked massive unconventional oil and gas reserves across the continent,” he says. “We’ve always known that these reserves were there but the key to unlocking that is the potential combination of horizontal drilling combined with reservoir stimulation methods and economies of scale.”

It’s plain to see there has been strong growth in North America including the Alberta oil sands, and the Bakken region of Saskatchewan and parts of North Dakota. This country has the world’s third-largest oil reserves at 175 billion barrels with a potential to reach 300 billion. In fact, a recent forecast shows that Canadian oil production is expected to double to about 6 billion barrels per day by the year 2030, which would put Canada in the top four oil-producing nations in the world. Canada is also the world’s third-largest producer of natural gas, with estimated reserves ranging from 700 to 1,300 trillion cubic feet.

Energy exports account for about one quarter of this country’s entire exports, led by oil at about $70 billion last year. Natural gas totalled $14 billion with all other energy products combining for a $30 billion bottom line.

The time for diversification has come. Virtually all of our crude oil exports are sold to the United States, which obviously leaves the industry extremely vulnerable. Making matters worse is that the U.S. has no shortage of partners it can purchase oil from.

“Because Canadian resources are landlocked with access only to one market, our oil and gas exports are receiving a heavy, discounted price,” Monaco says.

“We’re isolated from the world market and that makes us a captive supplier.”

Basic economics would reveal that relying so heavily on one trading partner is not ideal for our national economy whether it’s exporting commodities, services, technology or widgets – and the same holds true for natural gas.

In western Canada gas trades for about $3, while Asian prices are about $13 per unit. Asian markets, including Japan, are clamoring for Canadian natural gas, especially now with their nuclear plants being shut down for inspection and assessment.

“While the United States will continue to be the primary market for Canadian oil and gas, it’s clear that we need to diversify our energy markets. Every day that goes by without access to tidewater and world markets for our oil and natural gas is another day of lost opportunity.”

In order to properly respond to those challenges at hand, Monaco believes there are three main points of focus: to build infrastructure to connect growing supply to existing and new markets; ensure Canada develops resources in a sustainable manner; and investing in all forms of energy to meet future demand.

Monaco also wants to see a better link with eastern Canada that will feed our own refineries. Quebec, as an example, currently derives 90 per cent of their crude from offshore sources.

“It’s a solution that protects Canadian jobs and increases tax revenue in the range of $90 million a year for Quebec. That can go a long way to fund health and education and other programs.”

The project requires no new pipeline construction, so it’s an economical solution for producers and refineries in eastern Canada.

When the topic is Enbridge and pipelines, the name Northern Gateway can never be far off. It’s a project that has galvanized those in the industry, government policymakers, environmentalists, financial investors and many, many more making headlines from coast to coast and beyond.

According to figures released by Enbridge, Northern Gateway will contribute 270 billion to Canada’s gross domestic product (GDP) over 30 years, 63,000 person-years of employment during construction and 1,200 long-term jobs.

“Gateway will be a world-class project in every respect, from environmental protection to safety to community consultation,” Monaco says. “That includes consultation with First Nations and Metis and through our outreach we’ve met directly with more than 17,000 people.”

“On the regulatory side, Gateway is undergoing the most rigorous assessment that I’ve ever seen,” Monaco reveals. “The project will bring significant benefits to Aboriginal groups. In fact, they will be co-owners with us in the project.”

Enbridge has also noted that Aboriginal groups will benefit from procurement opportunities and skills training that will most often be transferable to other industries.

Sustainable resource development is something Enbridge and Monaco realize will be the key in order for this project and future projects to be successful. He feels good progress has been made in this area.

“Oil sands emissions have declined by 26 per cent per barrel from 1990 to 2010; water and energy use is down and good progress is being made on reclamation.”

Another progressive factor has been a cooperative within the industry to share research and technology findings in what appears to be a genuine effort to show public concern regarding pollution is being taken seriously. Monaco believes that a carbon tax is part of the equation for the future.

“The industry understands that the economic benefits of these projects alone, is not enough to make a case,” (for oil sands development) Monaco concedes.

“We are not a major CO2 emitter, but we did set our targets for reductions. In 2010, we reduced our Canadian direct emissions by more than 20 per cent below 1990 levels.” Enbridge attributes the noticeable reduction primarily through facility and equipment upgrades.

In order for a project of this magnitude to come to fruition, there needs to be widespread agreement from the likes of the public, governments, communities and industry while addressing concerns about the environment and possible side-effects on humans, animals and wildlife.

“Various groups are opposing any and every kind of project whether it’s nuclear, oil, gas and even renewable projects,” Monaco notes. “If we simply say no to every project out there, then we need to ask those who oppose those projects what their solution is.”

Without the traditional sources of energy, life as we know it could not possibly exist. There needs to be a balanced dialogue on forward approach. It needs to happen now.