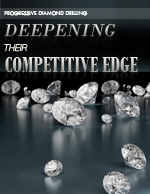 Founder and CEO, Victor Fournier, was an outside-the-box kind of thinker. With his help, Progressive has modified and invented equipment and techniques that have given them a real competitive edge in the field.

Take wireless overshot technology, for example—Fournier was the one who came up with the idea years ago. He did so because the drilling process was too time consuming.

Traditionally, drilling requires long steel tubes that are added as the drill goes deeper. Sometimes depths can reach upwards of 3000 feet. At the time, it was the only way for geologists to gauge whether or not a mine is economical. Bringing the string of rods onto and off of the jobsite took time is money. Fournier’s wireless overshot device eliminated that step, doubling the company’s speed and savings.

“It was a big thing at time,” recalls Laura Areneda, President of Progressive Diamond Drilling and Fournier’s daughter. “It gave us a huge advantage.” Areneda carries on her now-retired father’s tradition by continuing to manufacture their own equipment. “That’s another side of the business,” she says. “We manufacture our rigs ourselves, so we can make our drills to spec. It’s great because we can really accommodate our clients’ needs.”

Proving herself in a male-dominated industry
Areneda got into the business right out of school. At the time, her father placed her in charge of grants, where she was able to land some much-needed funding to grow the company.

“We were pretty lucky to obtain some grants with Atlantic Canada Opportunities Agency (ACOA),” she explains. “With them, we were able to get some rigs going. That’s when we went from a small company of about five employees to as many as 150 employees. ACOA has helped us out an awful lot.”

Areneda still handles the business and financial side of the company, but don’t underestimate her knowledge of the technical stuff. Her father trained her in all things mining for over 20 years. Fournier had so much confidence in her that she was his first choice when he decided to back off from the company.

As a woman in a drilling company, Areneda knows she represents a minority, but she mostly laughs about it.
“It has definitely raised some eyebrows, I have to say,” she chuckles. “I’ve had a lot of people be taken aback by the position I’m in. I find what happens is once others see the company, and learn about our projects, they realize we do a good job and take pride in our work. And once they see a product, they’re happy.”

“Being a female in the field has served me well in a lot of ways,” Areneda continues, “because sometimes I’m underestimated and it allows me to pleasantly surprise people. Right off the bat, people think they should be talking to someone else. When I tell them I’m the one who handles everything, they can be a bit leary, but it always works out in the end. Not all guys react like that initially, but let’s be honest, it is a male-dominated field, so it happens a lot!”

Areneda remains positive, saying “I love it here. Every day is different; it’s a pile of fun.”

A potash mining project
Progressive has worked all over the world, but for them, the project they are proudest of takes place right here in Canada—in Saskatchewan to be exact.

“We have really enjoyed working with Potash Corporation of Saskatchewan over the years,” says Areneda. “Ten years ago, we were brought in because they were having a brine inflow problem, and unfortunately water and potash don’t mix. If they couldn’t stop the water, the mine would have been in real jeopardy, so we came in with a drilling and grouting program.

Ten years later, Progressive is still there.
“It’s an ongoing project,” Areneda beams. “As of today, we’ve put in enough cement to put a sidewalk from the east to west coast. It’s the largest grouting and mine dewatering project in the world! We continue to drill down and then pump walls of cement.”

The project has been profitable for a few reasons. Not only has Progressive had steady employment for the past decade, but they have also been able to develop a full selection of grouting pumps and gear for other projects. The company has been able to branch off with grouting, which has opened a new part of the market for them.

“Safety is the priority,” states Areneda. “Companies will not get contracts if their safety record isn’t top notch. It’s the number-one concern, even before price. We make sure that we look after our men. The environment is another pressure point where you won’t be considered for a contract if don’t have a responsible plan. We have to do as little damage to the area as possible.”

“Our focus is on leaving the jobsite with little to no footprint—you shouldn’t be able to see that we were there. And it’s entirely possible. We can use better supplies and equipment, putting more care into what we’re actually doing. Sometimes it’s more expensive, but it’s worth it.”

Laura Areneda is likely correct. As the company faces the economy, it’s their reputation that will remain with them when things start to look up. Even when money is tight, Progressive will continue to act responsibly, knowing that it makes a difference on the other side. “Our reputation will pull us through,” she says.

Other than safety and environmental consciousness, Progressive Diamond Drilling is focused on training their employees in order to maintain a strong working company.

“We have the same challenges as everyone else,” reasons Areneda, “but we’ve been through this before, so we know what it’s like. We cut back on the extra expenses and our expansion plans until the market stabilizes, which we truly believe it will. Fortunately, we tripled our sales in the last few years, so we’re doing okay. Now, we’re just trying to maintain what we’ve built. Once everything gets better, we’ll get back on track.”
Getting back on track includes expanding to other parts of the world.

Progressive has already done international work in the past, but Areneda wants to build on that. “We love our work here in Canada and we want to keep doing it,” she concludes. “But we would also love to be everywhere!”